Why Am I A Dispensationalist? | Martin Wickens

Why Am I A Dispensationalist? | Martin Wickens 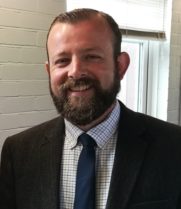 I was born in England on October 4th, 1980. The next day, over 3000 miles away, Thomas Lenwood Dotson, and his young family, enjoyed a farewell service from a church he had planted, and they began their journey to become missionaries to England. A few years after this, a young man from Puerto Rico who had grown up in NYC, Natalio Ortiz, joined the USAF, and he too began a journey to England.

By the time I was five my parents had separated, and my mum had met and married Natalio. Shortly before being married my step-dad, Natalio, had become a believer through the ministry of Thomas (Tom) Dotson. Natalio brought my mum and my brothers to this new church planted by Pastor Dotson. It is now called Brimpton Baptist Church, Brimpton, England.

So, through an amazing series of events, the Lord had brought the Gospel literally to my doorstep.

Pastor Dotson had grown up in tough times in northeast GA. After becoming a believer and receiving training at Bob Jones, Pastor Dotson started and pastored several churches. He eventually answered the call to be a missionary and came to England.

I’m not sure if it was pastor’s training, or whether it was his desire to simply let the Scriptures speak for themselves, but he consistently taught dispensational truths.

I don’t remember those truths ever being taught in a systematic sense. But in later years as I studied books by Ryrie, Walvoord, and Pentecost, and as I sat under the teaching and preaching ministries of Pastor David Moore and Pastor Stephen Boreland, I recognized much of what they covered. I did not know I was a dispensational, pre-millennial that employed a literal, grammatical, historical hermeneutic, but I was, and I did!

Because Pastor let the Scriptures speak for themselves I learned from the beginning of my Christian life to do the same.

God called me to preach and God led me to a small Bible school in Northern Ireland. Stephen Boreland, David Moore, and Tom Fittis were the main teachers and impacted my life in a great way. Under their teaching, my convictions regarding dispensationalism strengthened. The tools they provided me to study, understand, and apply the Scriptures have enabled me to continue to delve deeper and wider in the Word and see the dispensational hermeneutic as the only consistent method of bringing together all of God’s Word.

My dissertation subject was “The Millennial Kingdom”. Much of my time was spent emphasizing why there must be a millennium, and not so much about the millennium itself. I have taught on dispensationalism and prophetic subjects often over the years and have always been amazed at how a proper understanding of dispensationalism impacts a believers’ manner of living today. Recently I have been studying the subject of evangelism in the millennial kingdom. The truths that underpin dispensational thought have helped guide me through the subject.