Why Am I A Dispensationalist? | Vincenzo Russo

Why Am I A Dispensationalist? | Vincenzo Russo 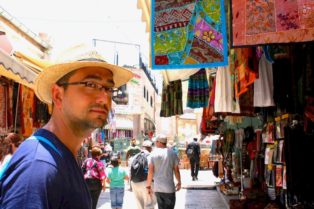 Vincenzo Russo is laymen living in Ashford, a little town in the county of Kent, England with his wife, Manuela. He works as Software Architect in London, and usually goes by the name of Vince or Vinnie. He used to be a computer geek, but these days he is more of a theology one.

My name’s Vincenzo Russo; I’m 36 years old and am originally from Naples, Italy. I have been living in the UK since 2008 and am currently in the county of Kent, with my wife and our two children. My wife and I were both born again in 2012 (when we were not yet married), within few months of one another. Our testimony is kind of long, so I shall skip the details. Suffice to say that God turned us around, and we went from being on separated roads (both leading to destruction, of course) to being married to the glory of God nine months later.

When I became a Christian, I remember one of my first prayers to God was that He would teach me, that He would make me able to be the spiritual leader I was supposed to be in the house, and that He would also make sure I wouldn’t go astray listening to theories of man, rather than to His Word. I must say, He has made sure of that time and again. And sometimes, He had to do it the hard way, too.

Shortly after, I started to have my first questions, regarding all sorts of areas. As far as exegesis is concerned, some passages did not seem to make much sense under the two key presuppositions I had brought to text in my early days: a) the Church had temporarily replaced Israel in God’s plan (well, for a very short period I thought the Church had replaced Israel for good); b) the whole of the New Testament canon had the Church and the Church alone as both the recipient and the main subject.

That’s when the Lord gently steered me towards what would become my first human teacher. He, now with the Lord, ran an online ministry, and I mainly read his articles. This man was a dispensationalist, as I would find out much later; however, the only distinctive feature that would normally come out of all his articles and studies was his exegetical approach: literal, grammatical, historical, and in context. That was like the final key that brought the Word totally into focus for me. Armed with just that tool, and the advice of always interpreting difficult passages in light of the easier ones, the Bible went from black/white to technicolour. Every passage that, even today, seems to be seen as “difficult” under other systems was becoming natural to comprehend for me. Yes, of course: I am not saying I understand the Bible perfectly; difficult passages are there nonetheless, but the difficulty does not lie in a faulty exegetical approach, but rather in the overall complexity due to context, prophetic sections, historical background, etc.

Anyway, where am I going with this? How does any of that answer the question at hand, “Why am I a dispensationalist?” Well, dispensationalism as a system was not imposed onto me, but I was led to it from what is essentially the core of the dispensationalism: literal, grammatical, historical hermeneutics – the Golden Rule of interpretation. Thus, I am a dispensationalist because at the heart of the whole system lies a principle that delivers consistency and coherence, making sense of both the overarching message of the Bible and all the details. And it does that in total harmony, with no logical and philosophical gymnastics required, achieving what I believe was God’s intention about His Scriptures from the very beginning: communicate God’s truth to every man and woman. The literal, grammatical, historical hermeneutics leaves no room for institutions like the Magisterium or the attitude of some circles that would like us to believe that you can’t truly understand the Bible if you do not have one or multiple doctorates.

Thus, I am a dispensationalist because I am utterly convinced that it is the only system that leads to a correct theology, from Christology to Soteriology, from Ecclesiology to Eschatology, from Anthropology to Israelology. From my own personal experience, I also believe it to be the only system that gives rise to the right kind of passion in the believer; I think that to understand God’s Word properly is paramount to develop a sane and fiery sense of awe for God and His astonishing plan.

In the short time I’ve been a Christian, I’ve been challenged and also challenged myself in multiple areas of theology to make sure I wasn’t becoming “traditionalised”. To this day, every other option I have analysed falls tremendously short when compared to Classic Dispensationalism; under such alternatives, the Bible seems to become either irrelevant or a farce.

That is why I am dispensationalist.

__
If you would like to submit your dispensational testimony for publication on our blog, send it to Randy White.