Why Am I A Dispensationalist? | Chris Giles

Why Am I A Dispensationalist? | Chris Giles 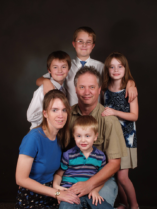 Chris Giles is a layman living in Forney, Texas with his wife, Fran, and their four children.

I am nothing more than a layman who has spent the majority of his life in church.

Although I was raised a Catholic, I was always an outsider. I never quite fit in to the ritual, the liturgy, or the rites of the Catholic church. I found the Bible to be interesting and would read the large picture Bible that I had at the time. While I understood the stories it presented, I did not understand why there was no one available (no parent, family member, or friend) who could explain what the stories meant nor what their relevance was to our day-to-day Christian living.

As a child, a teenager, and a young adult, I saw the world for what it was and, at times, succumbed to its influences. It was not until a young, Christian woman I worked with told me about Christ and invited me to a home Bible study that I really started to question who Jesus was, the presentation of a pre-tribulation rapture, and where the world was going.

I gave my life to Christ during a Christian music revival. While navigating the roller coaster of life (marriage, divorce, marriage again, children, work, work, work), I struggled with what it meant to be a Christian and how to live like one.  I attended a variety of different denominations (Assembly of God, Foursquare, Vineyard, and Non-Denominational), but as I continued living as Christian in the church, I continued to be somewhat disenfranchised with the things I witnessed and heard from other believers, deacons, pastors, elders, evangelists, and missionaries in regards to the Scriptures.

It was a shake-my-head moment, and that only continued as we relocated to Texas and spent a number of years in both Southern Baptist and Independent Fundamentalist churches. In these churches, we saw a continuously creeping influence of selfism and the idea that the Church was setting up shop here on Earth to either build a Kingdom or prepare for the forthcoming tribulation that we were required to endure until the end.

During a poorly presented Bible study that badly mixed the events concerning Samson in the Book of Judges with life application of Christian believers, I finally had what was called a “Samson” moment. I really began to question and look into what was wrong with Bible teaching overall. This lead me to Randy White Ministries, Dispensational Publishing House, and others like them that provide resources to present and teach the Word to believers as well as present testimony to those who do not yet believe.

I have never wavered from anything in my beliefs concerning salvation and have always believed that it is received by the free will of men and women who repent and receive salvation through Jesus Christ without having to fear that it can be lost. I have also never wavered from the understanding of the blessed hope that was spoken of by the Apostle Paul in 1 Thessalonians 4 over the decades. But more and more within the Church, I see apathy; I see complacency; I see disdain; and I see anger concerning the blessed hope for the Church. I see this coming from a range of the most progressive liberal denominations to the most ultra-conservative denominations. And in the end, the commonality of this range is the rejection of the dispensational teachings of the Scriptures. I have come to the conclusion that the lack of dispensational teaching is the root of all division in the Church and of the conflict regarding how we are to live as believers.

The lack of dispensational teaching of the Scriptures is also the root of the Church’s past, present, and future disdain towards Israel and her eventual opportunity and hope to be redeemed through the Messiah. During this dispensation of grace, the preaching of Christ crucified is still the stumbling block for many of the Jewish people; however, in the next dispensation when there will be darkness, I pray that the dispensational teachings of the Scriptures will be the light of revelation of the Messiah for the people of Israel.

In conclusion, I think the actual question I am answering is not merely, “Why am I a dispensationalist?” Instead, it is, “Why was I an outsider?”

And still remain an outsider….