Now behold, two of them were traveling that same day to a village called Emmaus, which was seven miles from Jerusalem. (Luke 24:13)

That is how they felt as they began their journey away from Passover in Jerusalem on that first Easter Sunday afternoon.

The beauty of their surroundings only vividly reinforced the depth of their desperation.

The great Biblical historian Alfred Edersheim describes what he thinks that journey may have been like:

. . . if not to the exact spot, yet to the locality, or rather the valley, that we may in imagination follow the two companions on their road.

We leave the City by the Western Gate. A rapid progress for about twenty-five minutes, and we have reached the edge of of the plateau. The blood-stained City, and the cloud-and-gloom-capped trysting-place of the followers of Jesus, are behind us; and with every step forward

and upward the air seems fresher and freer, as if we felt in it the scent of mountain, or even the far-off breezes of the sea. Other twenty-five or thirty minutes—perhaps a little more, passing here and there country-houses—and we pause to look back, now on the wide prospect as far as Bethlehem. Again we pursue our way. We are now getting beyond the dreary, rocky region, and are entering on a valley. . . . A short quarter of an hour more, and we have left the well-paved Roman road and are heading up a lovely valley. The path gently climbs in a north-westerly direction, with the height on which Emmaus stands prominently before us. . . . What an oasis this in a region of hills! Along the course of the stream, which babbles down, and low in the valley is crossed by a bridge, are scented orange- and lemon-gardens, olive-groves, luscious fruit trees, pleasant enclosures, shady nooks, bright dwellings, and on the height lovely Emmaus. A sweet spot to which to wander on that spring afternoon; a most suitable place where to meet such companionship, and to find such teaching, as on that Easter Day.[1]

And therein lies the key to the entire episode. You see, something amazing happened while this pair walked to Emmaus.[2]

So it was, while they conversed and reasoned, that Jesus Himself drew near and went with them. But their eyes were restrained, so that they did not know Him. And He said to them, “What kind of conversation is this that you have with one another as you walk and are sad?” (Luke 24:15-17)

It may have been where the two roads…meet, that the mysterious Stranger, Whom they knew not, their eyes being ‘holden,’ joined the two friends.[3]

Swiss artist Robert Zund also captured this scene in his famous painting called, “The Road to Emmaus,” done in 1877.[4] 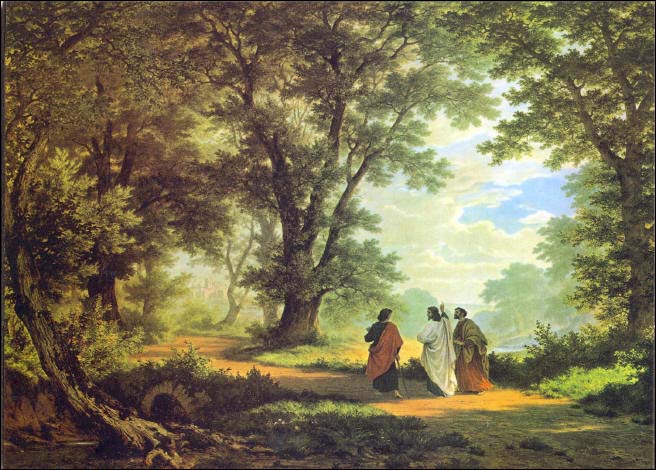 It seems to portray the surprise that these disciples must have felt after Christ joined them—and the energy that He interjected into their formerly-woeful conversation.

. . . the chief priests and our rulers delivered Him to be condemned to death, and crucified Him. But we were hoping that it was He who was going to redeem Israel. Indeed, besides all this, today is the third day since these things happened.

Christ had been crucified on Friday, and here it was Sunday afternoon, and there was no sign—to their minds—of anything like the resurrection that they had hoped for. Of course, His tomb was empty—but what did that mean? They could not tell . . . they had no sense of understanding of where all of this was leading. 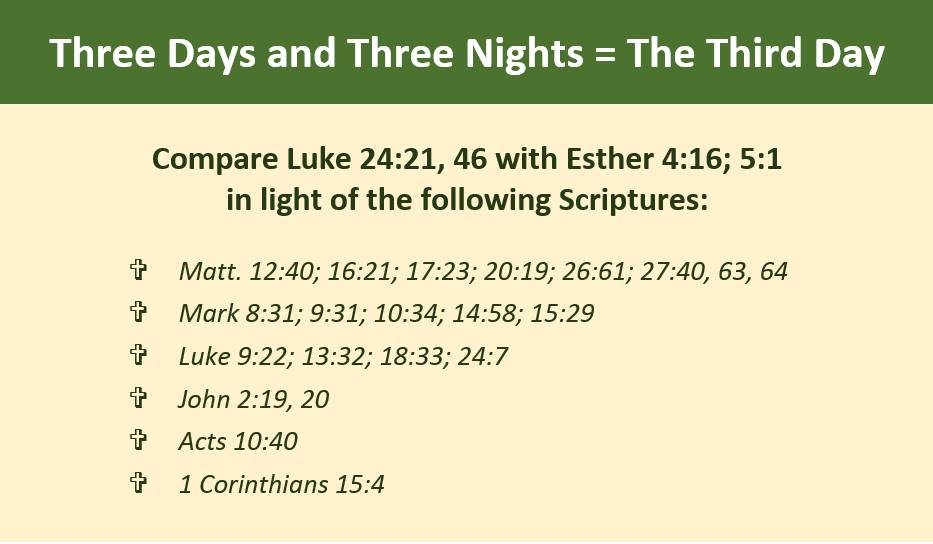 Amazingly, Christ startled them out of their lethargy, misunderstanding and disbelief with this powerful rebuke:

Then He said to them, “O foolish ones, and slow of heart to believe in all that the prophets have spoken! Ought not the Christ to have suffered these things and to enter into His glory?” (Luke 24:25-26)

This shocked them into a state of attention, which grew as they listened to the point that they did not want the session to end (Luke 24:29).

We may infer that the content of Jesus’ message could be the basis of a series of sermons or an entire seminary course, yet it is simple enough for Luke to summarize in one verse:

And beginning at Moses and all the Prophets, He expounded to them in all the Scriptures the things concerning Himself. (Luke 24:27)

Here is the ultimate point of the account: Their focus needed to be placed objectively in the all-sufficient, authoritative Word of God rather than their hopes, dreams, feelings—or even any sign-miracle that could be given to them (cf. Luke 16:30-31; John 20:29). The substantive fact of the resurrection, confirmed through the clear teaching of Scripture, was the only sign that they needed, and it is the only sign that we will receive. Whereas previously their understanding was limited to that which they could see and comprehend in the natural realm, it was now illuminated by the Word of God—declared to them by a Man whose identity they did not yet realize. At that moment, they began to “walk by faith, not by sight” (2 Cor. 5:7). They had to learn to allow Scripture to interpret their experience (Luke 24:32, 44-45). Once they did, no human journey would be too great (Luke 24:33).

Perhaps today you feel like you are also traveling to Emmaus—leaving behind what you hoped would be a season of blessing and moving into a place of uncertainty. Maybe you are still a doubter when it comes to the resurrection, or perhaps you just feel like all hope is lost when you fix your attention on your circumstances. If so, you must understand what these weary travelers learned. You must humble yourself to accept the life-transforming message of the risen Lord!

You must learn that the message of Emmaus—the message of Easter—is the certainty of the resurrection. It is the offer of the forgiveness of sins through the price that Jesus paid for them on the cross. It is the proclamation of eternal life, opened by Him through His resurrection (cf. John 14:19). It is the conviction that life has meaning, rooted in all 929 chapters of the Hebrew Old Testament—every one of which has a place in preparing us to receive Christ as the Messiah and Savior. It leads to the realization that we must live in the presence of our resurrected and glorified Savior.

Because Jesus is risen, there is no need to “walk and (be) sad” on your road to Emmaus (Luke 24:17). Even the most seemingly meaningless detour has purpose as part of a greater mission.

Have you received the gift of eternal life that the risen Son of God now freely offers?

Have you taken the time lately to share that message with someone—who may be traveling to Emmaus? 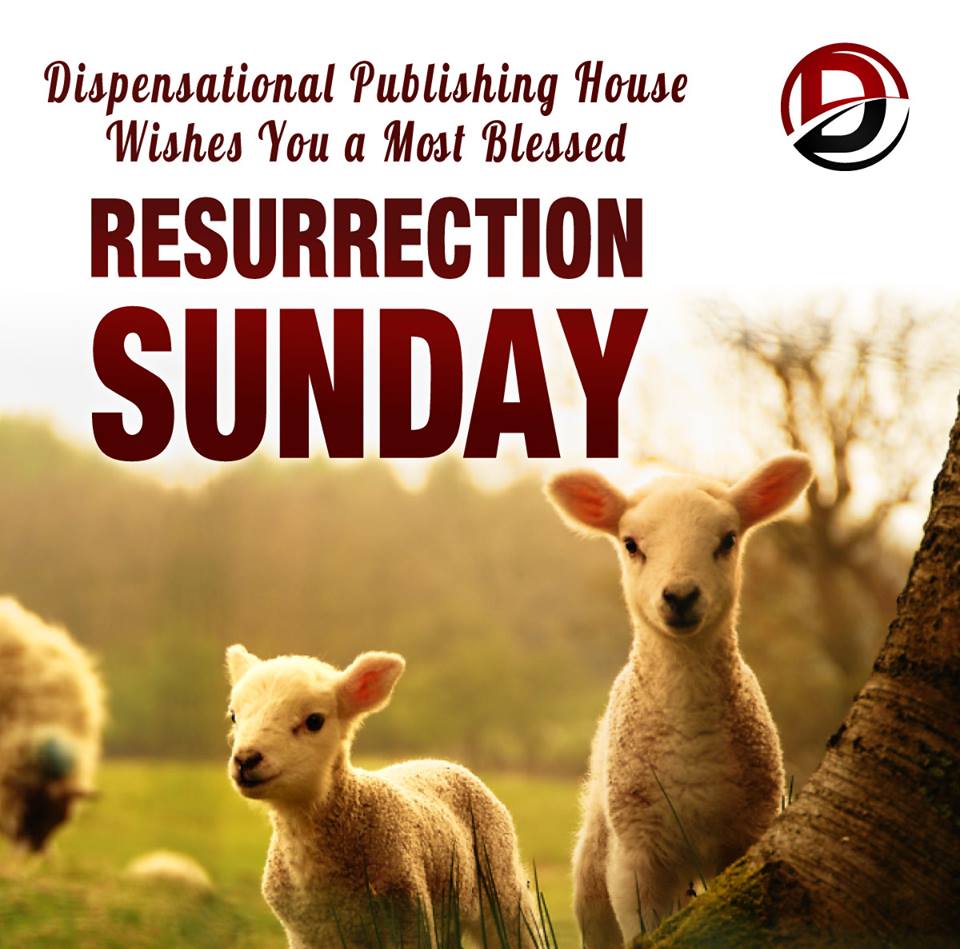 [1] Alfred Edersheim, The Life and Times of Jesus the Messiah (McLean, Va.: MacDonald Publishing Company, n.d.), pp. 639, 640. [2] “Emmaus was about seven or eight miles northwest of Jerusalem. It would take two to three hours to walk the distance.” James A. Borland, “The Gospel According to Luke’” in Liberty Bible Commentary: New Testament, edited by Edward E. Hindson and Woodrow Michael Kroll (Nashville: Thomas Nelson, 1982), p. 203. [3] Edersheim, p. 640. [4] This painting is now in the public domain.