John included, under the inspiration of the Holy Spirit (2 Tim. 3:16), instructions he received from an angel to “measure the temple.” History documents that the Babylonians destroyed the first temple in 586 B.C. The Jewish people then constructed the second temple by 515 B.C., but the Romans subsequently destroyed that temple in A.D. 70. In A.D. 95, the angel instructed John to measure a non-existent temple. God’s Word is always 100 percent accurate and, therefore, there is an answer to the seeming conundrum.

Measuring Mandated
The word for the title of the book of “Revelation” is the translation of the Greek word apokalupsis. The word literally means “to take the lid off a container, uncover or unveil.”[2] God unveiled a plethora of prophetic truths in the largest section of Scripture dedicated solely to describing the future eschatological seven-year tribulation period, which is located between Revelation 4:1 and 19:10. Included in those truths is the fact of the yet future construction of the tribulation temple (Rev. 11:1-2):

Then I was given a reed like a measuring rod. And the angel stood, saying, “Rise and measure the temple of God, the altar, and those who worship there. But leave out the court which is outside the temple, and do not measure it, for it has been given to the Gentiles. And they will tread the holy city underfoot for forty-two months.”

The angel gave the Apostle John specific instructions regarding what to measure in the third temple, even though it was not physically in existence at the time. John addressed the reality of a future literal temple and altar, the presence of the Jewish people who will come to the temple to worship and the reality of the court of the Gentiles, located “outside the temple,” for non-Jewish people.

A literal interpretation of Revelation yields a future earthly Temple. Futurists interpret the events described in association with this Temple (Revelation 11:1-2) as identical with the seventieth week in Daniel’s 70 weeks prophecy (Daniel 9:24-27).[3]

Measuring Forbidden
The Apostle John provided the explanation of why the angel instructed him not to measure the court of the Gentiles: “They will tread the holy city underfoot for forty-two months” (Rev. 11:2).

Expanding on what John stated, and comparing Scripture with Scripture, the meaning becomes evident. John was stating that during the horrific 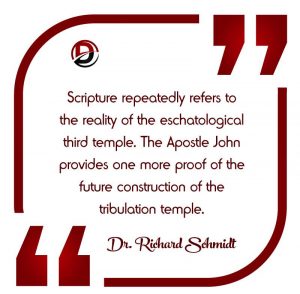 tribulation period a third temple would exist in the holy city, which is another term for Jerusalem. The Gentiles will persecute the Jewish people during the final half of the tribulation, or 42 months, which also equates to three-and-a-half years, or half of Daniel’s 70th prophetic week (Dan. 9:27). The strong inference in Revelation is that the Gentiles are profane, in contrast to the temple, the brazen altar and the Jewish worshippers. Though God provided the Jewish people the allowance for the third temple, God will not protect the temple from the Antichrist desecrating and taking over the temple at the midpoint of the tribulation period (Dan. 9:27; Matt. 24:15).[4]

Measuring up to Scripture
The book of Revelation frequently quotes and discusses truths found in the Old Testament and the gospels. Prior to the writing of Revelation, three passages in Scripture discussed the fact of the tribulation temple (cf. Dan. 9:27; Matt. 24:15; 2 Thess. 2:4). This accentuates the fact that the entire Bible, composed of 66 books (39 Old Testament and 27 New Testament), written over a 2,000-year period, from three continents including Africa, Asia and Europe, using three languages including Hebrew, Aramaic and Greek, all fits together in perfect synchronization (cf. 2 Pet. 1:20-21).

Scripture repeatedly refers to the reality of the eschatological third temple. The Apostle John provides one more proof of the future construction of the tribulation temple. As sure as Scripture records the reality of the temples, so the Bible also provides multiple proofs for the imminent pre-tribulation rapture of the church-age saints (1 Thess. 4:13-18; 1 Cor. 15:50-54).

Christians will not go through any part of the horrific seven-year tribulation period, which is strictly part of the Jewish prophetic calendar and not the current church age (Dan. 9:24-27). These distinctly dispensational truths will come to pass exactly as God recorded them in His authoritative, inerrant, infallible Word.