The Waters of Israel

The Waters of Israel

Israel’s 68th Independence Day celebration speaks to the commitment of the Jewish people to protect and enhance their precious hard-earned land. One of the greatest challenges facing the Israelis is a sufficient supply of water for their crops and human consumption. I was amazed at several things I personally observed as our study group moved from the northernmost border of Israel to the southernmost border. We will examine three bodies of water in this article: the Sea of Galilee, the Jordan River and the Dead Sea.

Here is the beautiful southern view of the Sea of Galilee, as seen from the Golan Heights.

Sea of Galilee
No study tour is complete without heading to Caesarea Philippi, also called Banias, on the northern border of Israel, to see the headwaters for the Jordan River. The water rushes down a beautiful mountain water-fed stream, flowing into the Jordan River, and shortly thereafter into the beautiful Sea of Galilee, also called the Lake of Chinnereth (cf. Num. 34:11), the Lake of Gennesaret (cf. Luke 5:1) and the Sea of Tiberias (cf. John 6:1). The sea, which is the largest fresh water lake in Israel, is 12-and-a-half miles long and seven-and-a-half miles wide, with a 33-mile shoreline.[1]

Here is a view of the Sea of Galilee facing Tiberius, as seen from a tour boat.

The Bible often refers to the Sea of Galilee, where many events during the life of Jesus occurred. A few events include Jesus walking on the water (Matt. 14:25), Jesus teaching from a boat (Luke 5:3) and Jesus telling the disciples where to let down their nets for an unprecedented catch of fish (Luke 5:4-7). Jesus called Simon, Andrew, James and John, who were fishermen, as disciples  in Galilee (Matt. 4:18-22; Mark 1:14-20; Luke 5:1-11). 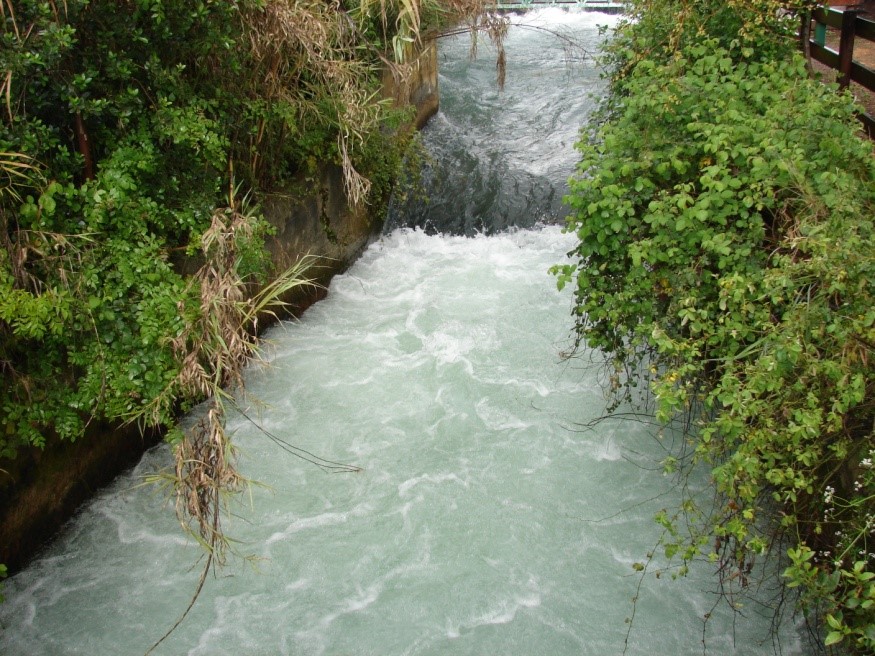 These are the headwaters to the Jordan River.

Jordan River
John the Baptist brought the River Jordan to the forefront of Scripture when he baptized the Lord Jesus (Matt. 3:13). Many tourists from around the world and local Israeli Christians still come to baptismal sites sanctioned by Israel. The water level is increasingly diminishing as local farmers irrigate their crops with the precious water resource. The Jordan River provides the inlet water at the north end of the Sea of Galilee. The south end of the Sea of Galilee feeds the 65-mile section of the Jordan River that feeds and ends at the Dead Sea.[2]

Dead Sea
The Dead Sea, the lowest place on earth at 1,300 feet below sea level,[3] is one of my favorite places to visit in Israel. The first time I saw the beautiful blue water of the Dead Sea was in 2009. The weather was beautiful and the temperature was around 90 degrees. I wondered why no one was boating, swimming or fishing in the beautiful lake. I asked the tour guide why no one was on the lake. He kindly responded that we were approaching the Dead Sea, where the water was so caustic that no one could swim in the water, and no boat would last more than a short time in the extremely high mineral content. This also explained why no one was fishing. The Dead Sea by nature prohibited anything from living in its deadly waters.

The reason for the Dead Sea’s extremely caustic waters rests in the fact that the Jordan River slowly feeds the Dead Sea, but there is no outlet, and the evaporation rate is swift based on the intense heat of the area. Over the years, this resulted in the Dead Sea’s water level going down. In shocking contrast, land that was covered by water in 2009 is now dry land, and house-sized sinkholes formed in multiple areas along the shore. I even observed a building that had literally tipped on its side and was partially in a sinkhole.

The Bible speaks of another major transformation to the Dead Sea that occurs in the eschatological future. The prophet Zechariah reveals the distinctly dispensational truth:

Here are the greatly-receding waters of the Dead Sea, as viewed from the top of Masada.

The eastern sea here is the Dead Sea, and the western sea is the Mediterranean Sea.

Ezekiel adds to the facts of the transformation of the Dead Sea during the Lord’s millennial kingdom. God provided Ezekiel with a visual preview of the changes:

Then he brought me back to the door of the temple; and there was water, flowing from under the threshold of the temple toward the east, for the front of the temple faced east; the water was flowing from under the right side of the temple, south of the altar. Then he said to me: “This water flows toward the eastern region, goes down into the valley, and enters the sea. When it reaches the sea, its waters are healed. And it shall be that every living thing that moves, wherever the rivers go, will live. There will be a very great multitude of fish, because these waters go there; for they will be healed, and everything will live wherever the river goes (Ezek. 47:1, 8-9).

The temple here is the millennial temple and verse 8 speaks of the Dead Sea.

Scripture reveals that the next major event in Biblical prophecy is the rapture of the church (cf. 1 Thess. 4:13-18), followed by the devastating seven-year tribulation (cf. Dan. 9:27; Rev. 6:1-19:10), the return of the Lord Jesus Christ to earth (Rev. 19:11-16) and then the culmination of history in the 1,000-year kingdom of Jesus Christ (cf. Rev. 20:1-6) in a physically transformed Israel. God will fulfill these distinctly dispensational prophecies exactly as stated.

I sincerely encourage you to join with Dispensational Publishing House and travel to Israel with their passionate teachers of the Bible to the beautiful and ever-changing land of the Bible. What an opportunity to see, in a real-time visual format, the uncovering of the past and the stage-setting for soon-to-be fulfilled prophecy.