The Unitary Authorship of Scripture

The Unitary Authorship of Scripture

There are four essential principles that must be considered in order to understand literal interpretation. We looked at the first two, the univocal nature of language and the jurisdiction of authorial intent, in the last installment in this series. This time we will study the third element and then introduce the fourth and final one.

The Unitary Authorship of Scripture
It is commonly asserted that the Bible has a “dual authorship” and from a certain perspective this may have some truth. The Bible does have human authors and a Divine Author. But the dichotomy of the usual understanding of “dual authorship” must be challenged. It is better to understand Scripture as having a unitary (rather than a binary, Divine-human) authorship, which resulted in a unitary Bible with a Divine and a human aspect. This is comparable to the Divine and human natures in the single person of the God-man, Jesus of Nazareth. The difference between the Biblical word and the Word made flesh is that the Bible is not an extension of the Divine essence. Even as we must not divide the person of the God-man, we must not dichotomize the Biblical authorship. Zuck appears to do exactly this by saying, “In interpreting the Bible we seek to understand what the Bible says, not the human author’s intended meaning.”[1]

The confluence of the Divine and human participants in the authorship of Scripture is the essence of the doctrine of Biblical inspiration. Inspiration is the “supernatural influence exerted on the sacred writers by the Spirit of God, by virtue of which their writings are given Divine trustworthiness.”[2] The human authors and the Divine Author were in an organic relationship in the production of an inerrant Bible. In a sense, inspiration is an act that encompasses a process and a result. Inspiration proper, however, belongs to the writings and not the writers (2 Tim. 3:16, “All graphe [Scripture, script, writing] is theopneustos“), although the writers are obviously involved and cannot be excluded from the picture. 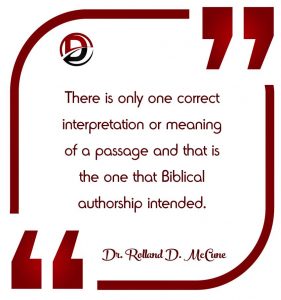 This establishes a most important point in literal interpretation. This identity of meaning prevents one from saying that the human author meant one thing but God meant another, or that God may have meant “more but never less” than the human author. The unitary authorship produced a single truth intention in every passage of Scripture, with meaning coextensive to the Divine and human participants in authorship.

The Textually-Based Locus of Meaning
Thus far we have seen that the Biblical languages (and all human languages) convey univocal meaning, that this meaning is based on authorial intent, and that the unitary authorship of Scripture by means of inspiration guarantees an identity of meaning between the human authors and God. This all leads to a fourth ingredient of literal interpretation—meaning must be textually based.

The authorial Divine-human truth intention of Scripture must be in the words of the passage. There is only one correct interpretation or meaning of a passage and that is the one that Biblical authorship intended. And the only building blocks of that intent are the words left to us. (The best resource for understanding that meaning is a lexicon.) Words cannot be made to carry some hidden freight of meaning that is not in the actual text of a passage as defined by the previous points. There cannot be two or more different meanings to the same words in a text.

It must be recognized of course that the words of a passage may carry implications beyond what are discernible in the text itself. Implications, however, are actually supplemental and are not to be construed as different meanings to the same words. Thus it is true that the Divine Author knows more implications of the Word of God than the human authors. Indeed, He knows all such implications. Human beings are not even aware of all the implications of their own speech much less those of the Word of God. However, all implications must be consistent with the textually-based truth intention of an author. They must reproduce in some verbally/grammatically identifiable way the author’s original text intention or idea.