Healthy Christians love biblical prophecy. We hold conferences, host debates, read and write books, carry on in endless Facebook threads over the minute details of the end times… hopefully in love, but unfortunately, we get carried away sometimes.
Of all that the Bible says about the future, the two things that I most want my unbelieving friends to understand are 1) The Rapture and 2) The Two Witnesses.

The Rapture will be an event in which everyone who is in Christ will be caught up in the clouds with him. I do not know when it will happen. Maybe in our lifetime. Maybe not.

I am sure that the nonbeliever thinks that this sounds wacky and, to an extent, that is actually a good thing. The Rapture is too wacky to occur without miraculous intervention, so if it does occur in my unbelieving friends’ lifetime, I should hope that they realize that the Bible recorded it thousands of years in advance.

Now, there are some details that we Christians like to debate about the Rapture. Will people fly off into the sky or will they just vanish? The dead in Christ will rise first, so what will this look like? There will be a trumpet blast first, so will everyone hear it? Will people on the ground be able to see us? I have my opinions in the details, but I don’t want my friends to say, “I expected everyone to fly away, but they disappeared, so this couldn’t be the Rapture.” However it happens, it will be quick and miraculous, but more importantly, it will verify the authenticity of the Bible.

I suppose there may be some confusion after the Rapture. I said that everyone who is in Christ will be raptured. That means anyone who has ever believed in Christ for eternal life. There will be many whom we did not expect to be taken. Terrible people who perhaps believed briefly many years ago as children, but since then have abandoned Christianity altogether. If they ever believed in Christ, then they will be with us in the Rapture. Likewise, I imagine that among those left behind will be church people who spent their whole lives relying on their own works rather than Christ for eternal life. The quality of the person who goes or stays is irrelevant; it is all about whether or not they ever believed in Christ.

The Rapture is too wacky for us to guess by accident, so if my unbelieving friends live to see it, I should hope that we got their attention. The world is going to be pretty chaotic and the Bible has much to say about this post-Rapture period, but the one detail that I want my non-believing friends to know is that two witnesses will arise. These two witnesses are trustworthy.

There is much else to talk about regarding biblical eschatology, but the Rapture and the two witnesses are, in my opinion, the most important for my unbelieving friends. Of course, it would be even better if my unbelieving friends would believe in Christ before the Rapture. I am working on that. I am sharing Christ with them, but I can only do so much. If I cannot lead them to Christ before the Rapture, then hopefully the two witnesses can during the Tribulation. 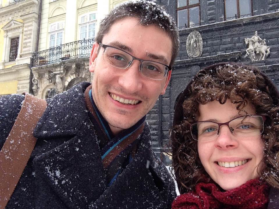 Paul Miles founded Grace Abroad Ministries with his wife, Lena. Together, they do translation, teaching, and outreach in Ukraine and manage the online Russian-language dispensationalism magazine, Et Libros. You can follow their blog at TheMileses.com.