The Rise of Gog?

The Rise of Gog?

Is Vladimir Putin the “Gog” of Ezekiel 38-39? At this point no one knows, but for years I have been saying he is “Gogesque.” However, he may simply be a forerunner to the real “Gog” who will one day follow in his trail.

Israel is constantly in the news which fits with Israel being the centerpiece of last day’s prophecy. Russia is also consistently in the news. In recent days, two significant events have transpired in regard to Russia.

First, Putin was “re-elected” with 77 percent of the vote which seemingly was rigged. Putin has little by little been building his strength to where today he is being called “a modern-day Czar.” This may well have prophetic significance, if not for Putin, then perhaps for someone who will follow him in this position.

Ezekiel 38-39 deals extensively with a leader called “Gog” who is from the “land of Magog.” The word “Gog” literally means “high” or “supreme.” It is a title similar in nuance to “Czar” or “Pharaoh.” Magog is associated with the ancient people known as “Scythians.” This area generally relates to what I refer to as the “stan” countries such as Kazakhstan, Kyrgyzstan, Uzbekistan, Turkmenistan, and Tajikistan, all being a part of the former Soviet Union.

Gog comes out of his place from the “far north” (cf. Ezek. 38:15). In the Bible, Israel as God’s chosen people is consistently the centerpiece nation and other nations are referenced in relationship to Israel. On a map if you go straight north from Israel as far as you can go and still be in land mass, you will be in Russia. Gog is the leader of Russia and company. And Putin is a man consumed with restoring the “glory of Mother Russia.” He may or may not be the Gog referenced 11 times in Ezekiel 38-39, but he clearly is “Gogesque” in the establishment of his Czar-like position.

Ezekiel 38-39 portrays a great last day’s alliance that will invade Israel under the leadership of Gog. After referencing Gog of Magog, the next country referenced that will be a part of this confederacy is “Persia” which corresponds to modern day Iran (cf. Ezek. 38:5). The other major player involved is Turkey. Dr. Jimmy DeYoung writes: “When traveling in Turkey recently I picked up an ancient Turkish map. In biblical times, Turkey was divided into four parts: Meshech, Tubal, Gomer, and Togarmah.” These are precisely the designations given in Ezekiel 38-39 that along with others will align with Gog in the “latter days” (cf. Ezek. 38:8, 16).

The second noteworthy development in recent days is that Russia, Iran, and Turkey are scheduled to have meetings in April. This, too, may well have prophetic ramifications. As previously mentioned, these nations are the major power-players seen in league under the leadership of Gog in Ezekiel 38-39.

In the last 2500 years, there has never been a military alliance made up of Russia, Turkey, and Iran. But now, they are clearly making plans together. The common concern they share relates to issues over Syria, and it is thought that this will probably be the catalyst for these upcoming talks. But at some point, these 3 players in addition to others will plot to make a power-move on Israel as laid out in Ezekiel 38-39. The very fact that they are now cooperating and working so closely together is noteworthy.

We are not setting any dates, but these are very interesting times in which we live. The coming of Christ ever grows nearer than when we first believed. The watchword of the church down through the ages has been “Maranatha” (“Our Lord Comes”). Perhaps Today! Live ready!

Editor’s Note: For a full treatment of the Ezekiel 38-39 war, read The Middle East Meltdown by Andy Woods. 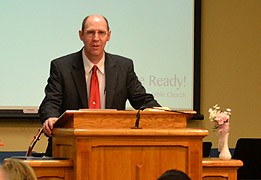 Pastor Dwight Oswald is pastor of Southview Bible Church in Council Bluffs, Iowa, one of the churches on our Dispensational Church finder.