The Recognition of Dispensational Distinctions

The Recognition of Dispensational Distinctions

Much confusion occurs with the interpretation of Biblical prophecy due to a failure (or refusal) to distinguish between Israel and the church, and thereby denying any future to national Israel and equating the historical throne of David with God’s heavenly throne. The former rule (the throne of David) could be called the single, unified, mediatorial kingdom that existed historically under the Mosaic Covenant and was prophesied by the Old Testament prophets to be restored in its former glory at the second coming of Jesus Christ. The latter rule (God’s heavenly throne), which is eternal, would be understood as involving aspects of God’s universal and spiritual kingdoms.

Christians who are keen to appropriate and assert the future blessings that belong to a redeemed and restored national Israel (throughout the kingdom reign of Christ from David’s throne in Jerusalem) are not willing—in any manner—to accept the curses and judgments that are associated with those blessings, and which have been fulfilled literally. For example, consistently throughout the book of Isaiah there is a reference to a future King, and He is consistently depicted as the one who 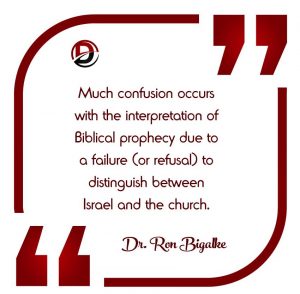 will fulfill the Davidic Covenant, in addition to sitting forever upon David’s throne, the existence of which has always been historical.

To assert that the numerous kingdom prophecies of the Old Testament are fulfilled in the present spiritual blessings of the church is to abandon the literal meaning of prophecy and to be without a basis or standard for interpretation. For instance, Isaiah 13—23 contains a series of messages which are primarily oracles or judgments against various Gentile nations. The emphasis within the prophecies is judgment, and thus the oracles should be given careful attention by all nations. One can be fairly certain that the foreign nations were not intended to read the judgments that God had decreed for them; rather, the intent of the messages was primarily to grant prophetic hope for the people of God. The expectation would be immediate for the original recipients of the Divinely-inspired messages (in the days of the prophet Isaiah), and would also inspire future generations as they observed the fulfillment of the prophecies.

Within the eleven burdens (oracles) upon the nations, the prophet Isaiah demonstrated what would occur throughout the ensuing several generations in the Near East as a consequence of the Assyrian invasion force whose armies were marching westward with a yearning for conquest and vengeance. Isaiah’s contemporaries would be able to evaluate the accurateness of his message, and thereby determine whether or not God had indeed revealed the burdens against the nations and was speaking those oracles to His people through the prophet.

The only consistent hermeneutic is one that regards—with utmost literalness and solemnity—the numerous and sometimes extended Old Testament prophecies that reference Israel’s eternal possession of land and the Davidic dynasty’s eternal occupancy of the historical throne. Indeed, the New Testament commences with the demonstration that Jesus Christ is “the Messiah, the son of David, the son of Abraham,” and thus the fulfiller of both the Abrahamic and Davidic Covenants (Matt. 1:1). Consequently, when one heeds a literal interpretation that grants the recognition of dispensational distinctions, one may then achieve a reasonable deduction.

For this reason, the newly launched Dispensational Publishing House is commended for its intent to produce “resources for Biblical understanding from a dispensational perspective.”

Dr. Ron J. Bigalke serves as the Georgia state minister for Capitol Commission. He also pastors a church plant through Biblical Ministries Worldwide and has taught for Bible colleges and seminaries—serving as a research associate with the University of Pretoria (missions and ethics project). He is a frequent contributor and editor for various publications through Eternal Ministries, Inc., writes for Midnight Call magazine and is general editor of the Journal of Dispensational Theology. We enthusiastically welcome him as a contributing author to Dispensational Publishing House.