In these final three installments of our series called, “The Saving Flood,” we will focus especially on two important passages. First, we read in Genesis 8:20-22:

And Noah builded an altar unto the LORD; and took of every clean beast, and of every clean fowl, and offered burnt offerings on the altar.
And the LORD smelled a sweet savour; and the LORD said in his heart, I will not again curse the ground any more for man’s sake; for the imagination of man’s heart is evil from his youth; neither will I again smite any more every thing living, as I have done.
While the earth remaineth, seedtime and harvest, and cold and heat, and summer and winter, and day and night shall not cease.

As we deal with these passages that describe the first days following the flood, we see the new beginning that unfolded in human history, and we notice the startling comparisons that we find between the creation in Genesis 1 and 2 and the re-creation that took place here in Genesis 8 when Noah and his family left the ark. 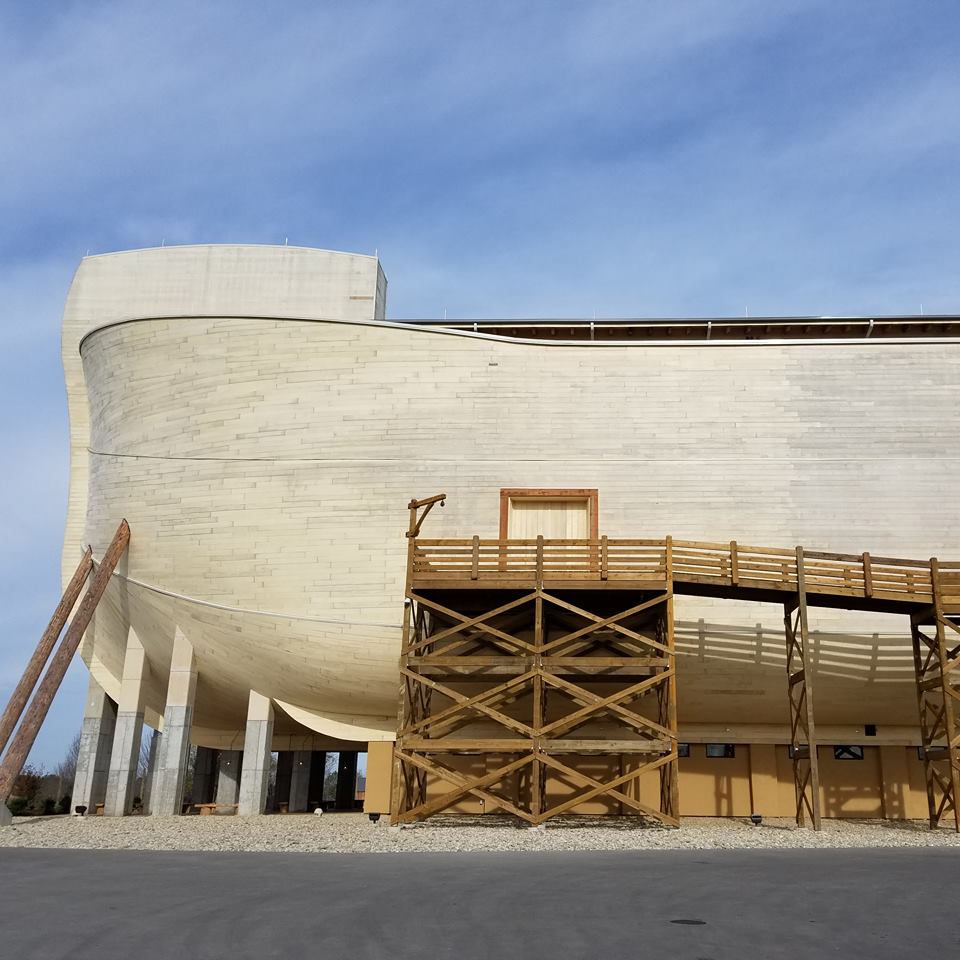 Some Startling Comparisons Between
the Creation and the Re-Creation

And the earth was without form, and void; and darkness was upon the face of the deep.

In fact, land did not become visible until the third day of creation. The Earth was previously covered with water, and no humans lived on the Earth during those initial days. Likewise, following the flood, men could not live on the Earth until “the waters were abated” (Gen. 8:3, 8, 11).

God blessed them, and God said unto them, Be fruitful, and multiply, and replenish the earth, and subdue it: and have dominion over the fish of the sea, and over the fowl of the air, and over every living thing that moveth upon the earth.

Those are almost identical verses, are they not?

And the LORD God took the man, and put him into the garden of Eden to dress it and to keep it.

When you talk about dressing a garden, you are a gardener, correct? Well, in that light, notice Genesis 9:20:

And Noah began to be an husbandman, and he planted a vineyard.

And the eyes of them both were opened, and they knew that they were naked; and they sewed fig leaves together, and made themselves aprons.

The idea behind the word aprons is “covering.” Of course, it is up to us to discern the type of covering that they made for themselves. But notice what happened in Genesis 9:21:

And he drank of the wine, and was drunken; and he was uncovered within his tent.

Noah’s sons came in following this and “covered” him up (Gen. 9:23). Thus, we see that both the creation and the re-creation began with the covering of nakedness.

Unto Adam also and to his wife did the LORD God make coats of skins, and clothed them.

Finally—to bring us to the main part of our lesson for this week—Romans 5:12 states:

Therefore, just as through one man sin entered into the world, and death through sin, and so death spread to all men, because all sinned. (NASB)

And Noah awoke from his wine, and knew what his younger son had done unto him.
And he said, Cursed be Canaan; a servant of servants shall he be unto his brethren.

What you see here from Romans is that “one man” sinned, and “all men” suffered the consequences. In Genesis 9, Noah sinned, but the consequences were passed on to Ham and Canaan and their descendants, who pay the penalty of that sin. In both cases we see the sin of one carrying on to another.

Early in Genesis we see the prophecy of the redemption of man. It comes in the most important verse in the entire Old Testament, which is Genesis 3:15:

I will put enmity between thee and the woman, and between thy seed and her seed; it shall bruise thy head, and thou shalt bruise his heel.

Later on, Noah gives, then, a prophecy that relates to the history of man and—really, ultimately—helps us to understand where to look for the promise of Genesis 3:15. We will study more about that before we conclude this series. 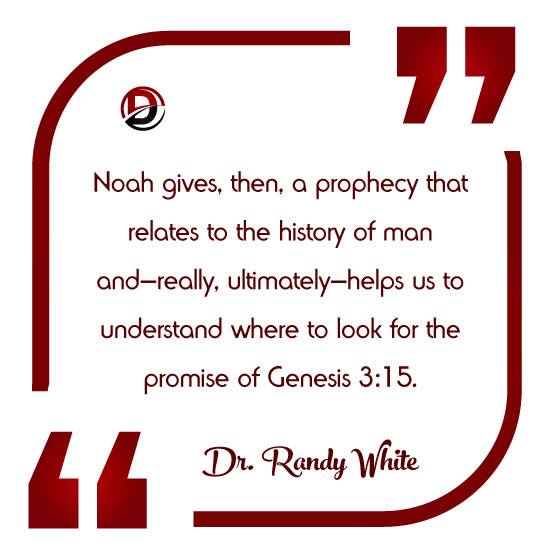 The other major passage that we will focus on in these final three lessons is Genesis 9:18-27:

And the sons of Noah, that went forth of the ark, were Shem, and Ham, and Japheth: and Ham is the father of Canaan.
These are the three sons of Noah: and of them was the whole earth overspread.
And Noah began to be an husbandman, and he planted a vineyard:
And he drank of the wine, and was drunken; and he was uncovered within his tent.
And Ham, the father of Canaan, saw the nakedness of his father, and told his two brethren without.
And Shem and Japheth took a garment, and laid it upon both their shoulders, and went backward, and covered the nakedness of their father; and their faces were backward, and they saw not their father’s nakedness.
And Noah awoke from his wine, and knew what his younger son had done unto him.
And he said, Cursed be Canaan; a servant of servants shall he be unto his brethren.
And he said, Blessed be the LORD God of Shem; and Canaan shall be his servant.
God shall enlarge Japheth, and he shall dwell in the tents of Shem; and Canaan shall be his servant.

Clearly, some time has passed here since Noah and his family left the ark following the flood. Also, all of you would probably admit with me that this is an odd and embarrassing story. In fact, we may not understand why this account is included in the text. Yet—believing in verbal, plenary inspiration—we know that everything that is in the Bible was given to us for a reason and for a purpose.

That being the case, however, it is still very important that we seek to know what God would have us to learn from this passage.

All scripture is given by inspiration of God, and is profitable for doctrine, for reproof, for correction, for instruction in righteousness:
That the man of God may be perfect, thoroughly furnished unto all good works.

In fact, whenever we come to a passage that appears to be mysterious, we must remember that it is profitable in the four areas noted in 2 Timothy 3:16. One of my pet peeves is that when I pick up a commentary to learn about a difficult passage such as this, I will often find that they have skipped over it! As a pastor and preacher, I try not to do this with hard passages. I think it is important that we preach so carefully from the text.

Romans 15:4 also gives us insight as to how we should approach a difficult passage such as this:

For whatsoever things were written aforetime were written for our learning, that we through patience and comfort of the scriptures might have hope. 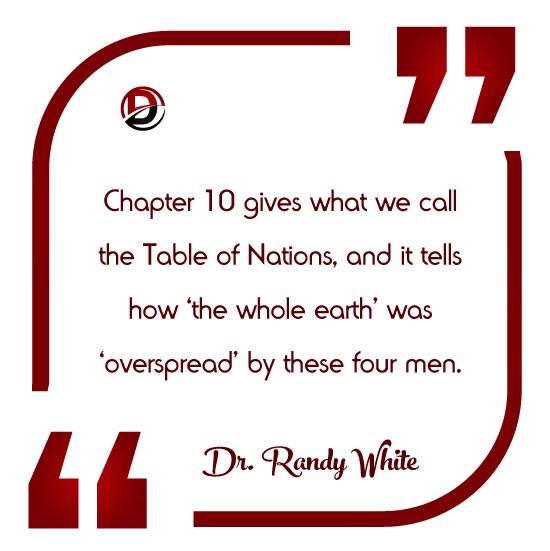 One of the things that we learn from this unusual passage in Genesis 8 is that even Noah had problems!

When Noah and his sons and their wives left the ark, they went out to repopulate the re-created Earth, which led quickly to the growth of humanity and the development of government in the new dispensation that we call by that name. Chapter 10 gives what we call the Table of Nations, and it tells how “the whole earth” was “overspread” by these four men (Gen. 9:19).

We will continue moving toward that portion of the passage as we develop more understanding of all that happened following the flood in the final two articles in this series.

Photo within the article is courtesy ArkEncounter.com