With all of the previous information about covenants in mind, together with the previous brief introduction to Biblical dispensations, let us attempt to track the interrelationship between the covenants and the dispensations. In order to understand the dispensations we must first grasp the significance of dominion and the role of fruitfulness and multiplication. God’s command in Genesis 1:28 marks the initiation of the theological narrative: “Be fruitful and multiply; fill the earth and subdue it; have dominion over the fish of the sea, over the birds of the air, and over every living thing that moves on the earth.” First of all, dominion directs the Bible student’s mind to the kingdom of God. We must not limit His kingdom to the millennial (or Messianic) kingdom of Christ. The millennial kingdom will be but the final outworking of God’s kingdom program in the old creation—the creation marred by the fall. God’s universal kingdom exists throughout all time (cf. Ps. 10:16). That universal kingdom involves all of the created universe, not just mankind, not just planet Earth (cf. Ps. 103:19; Isa. 24:23). The High King and ultimate Sovereign is God Himself. However, in His amazing grace and condescension, He has chosen to rule His kingdom mediately through mankind (cf. Ps. 59:13; Ps. 8). The unfallen Adam served as God’s first mediatorial ruler. The Creator intended Adam to be His vice-regent over all the earth (cf. Ps. 8:4-8; Heb. 2:5-9; 2 Tim. 2:12).

One of the means by which Adam fulfilled his kingdom role involved being fruitful and multiplying. Man is not God. Even with the help of Eve his co-regent, the unfallen Adam could not fulfill all that God planned for him. God chose to exercise His dominion over planet Earth by multiplying Adam’s co-regents. In the future millennial/Messianic kingdom, there will also be an increase of fruitfulness and population growth (see Isa. 60:22). “Joint heirs with Christ” (Rom. 8:17; He is the second Adam) will reign together with Him (Rev. 20:6) in His messianic kingdom. God intended all of this at creation. Of course, Messiah, as the “Son of Man,” will fulfill mankind’s role as the human race’s only perfect representative.[1]

Hebrews 2:8 states that “now we do not yet see all things put under” Christ, because His mediatorial kingdom (the millennial kingdom) has not yet commenced. In the end, even the currently reigning prince of this world, Satan (John 12:31; Eph. 2:2), will come under the Messiah’s reign and kingdom power. As long as Satan reigns as prince of this world, the kingdom of Christ has yet to be established. For that reason Jesus taught His disciples to pray, “Your kingdom come” (Matt. 6:10).

The first three dispensations dealt with all of mankind and their created potential in God’s kingdom program. In the Dispensation of Innocence (Gen. 1:17–3:21) God revealed His intent regarding mankind’s participation in His kingdom plan (Gen. 1:26-28). He issued a mandate for Adam and Eve to multiply, fill the earth, and rule over all the earth and over all the animals. Due to Adam’s disobedience, God imposed judgment by cursing the ground and expelling Adam and Eve from the Garden of Eden (Gen. 3:17-24). However, the Lord also announced His program of redemption (Gen. 3:15) as the remedy for the interruption of His creation blessing: the offspring of the woman would ultimately have victory over the prince of the fallen world, Satan.

In the Dispensation of Conscience (Gen. 3:22–8:12) God began to reveal how He would continue to provide for mankind, especially in regard to resolving the sin problem. This section of Genesis follows immediately after the revelation that God provided Adam and his wife with clothing made from animal skins (Gen. 3:21). Next comes the account of Cain and Abel in regard to their respective sacrifices. The implication appears to be that God had given revelation to them (perhaps through Adam) about sacrifices. Mankind began to call upon Yahweh (Gen. 4:26), perhaps in their expectation of the coming of the victorious “Seed” (offspring) of the woman promised in Genesis 3:15. Lamech certainly had that hope in mind in Genesis 5:29 when he named his son Noah (“comfort”) and looked for the Comforter to deliver mankind from the curse on the ground. Because “every intent of the thoughts of his heart was only evil continually” (Gen. 6:5), mankind grieved the Creator’s heart (Gen. 6:6) and He chose to bring global judgment upon them by means of the great flood in Noah’s day (Gen. 6:7, 17).

The third dispensation was that of Human Government (Gen. 8:13–11:32). Mankind had the freedom to organize themselves for ruling over the earth and utilizing its resources for sustaining human life, worship and cultural advancement. Instead of using their combined efforts for good, they chose to rebel against their Creator. They sought to extend their rule to heaven itself. They were following the example of Satan’s rebellion and desire to rise above the throne of God (see Isa. 14:13-14). God exposed the continuing heart problem of depraved humanity and, as with the global flood, brought a universal judgment upon mankind at Babel (Gen. 11:5-9). 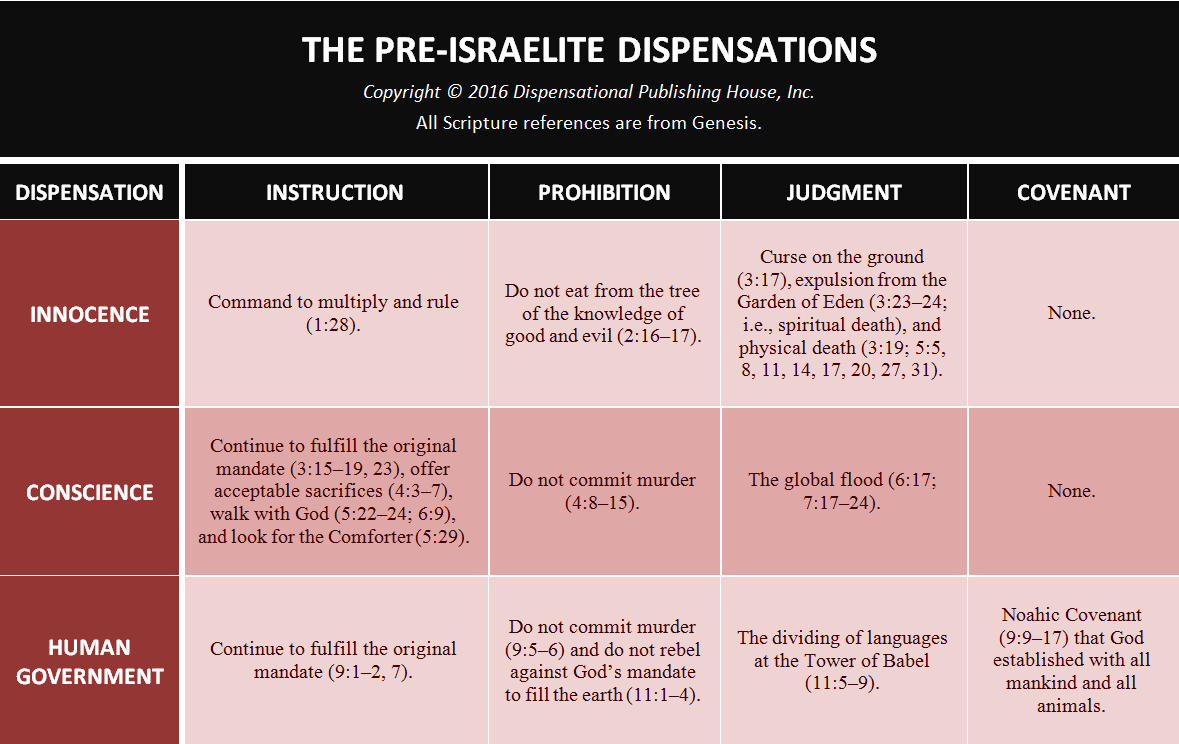 These first three dispensations involve all of mankind and find no correlation with the Biblical covenants God made with Israel. In each dispensation God provided instruction by means of oral revelation or by a God-appointed example teaching them how to live for Him and how to fulfill mankind’s kingdom role. Each dispensation concluded with Divine judgment due to mankind’s disobedience. As the following table demonstrates, the key instructions that God provided for mankind during these three dispensations anticipated the summaries offered much later in the Ten Commandments:

In other words, Divine instruction regarding sanctified living remained the same for believers in the transition from all mankind to God’s covenants with Israel during the remaining dispensations.

Just as the covenants reveal some of the attributes of God, the dispensations teach His people some valuable lessons regarding mankind:

In other words, human beings depend upon God for their life, their worship, their purpose and their salvation. Like black velvet behind beautiful diamonds, the various dispensations that mark off the progress in human history become the dark background that repeatedly displays the wondrous grace of God.