‘The Genesis Flood’: A Renewed Call to Biblical Literalism

‘The Genesis Flood’: A Renewed Call to Biblical Literalism

When I think of the great flood of Noah, I usually think immediately of my revered seminary teacher, Dr. John C. Whitcomb, in whose many classes I came to a deep appreciation of the Old Testament Scriptures. He was in the vanguard of a renewed call to Biblical literalism in Bible-science studies, beginning with The Genesis Flood (Presbyterian and Reformed Publishing Company, 1961). This book was in collaboration with Dr. Henry Morris, a professor of civil engineering at Virginia Tech University and an expert in hydrology. 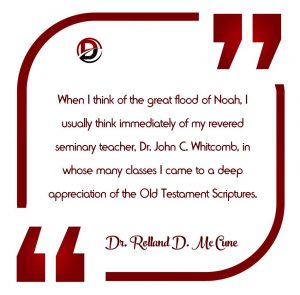 Dr. Whitcomb also taught the apologetics course, which was built around a Biblical presuppositional starting point. This point is the Bible’s own testimony to itself of its absolute Divine authority in all that it asserts, teaches and affirms beginning with the original creation of all that is not God. God planned, made, upholds and controls His universe with all its laws, properties and powers. Without this personal God nothing has a rational, intelligible explanation. This first principle must be upheld in Bible-science matters as well as in all else.

In understanding and presenting the case for the earth-wide deluge of the book of Genesis, the starting point must be the testimony—the revelation—of God in His self-authenticating Scriptures. This answers the basic question of the reality of the flood of Noah: Is the God of the Bible necessary for the existence and explanation of it, or is He not necessary? And the same goes for every facet and datum of the whole universe down to every physical law and exchange of energy. The only alternative is the invocation of a totally open, anarchist universe where positively “anything can happen.” This itself rests on the assumption of a self-starting, vacuous base of pure randomness, pure possibility and other components of sheer, blind irrational chance, supported by a near-infinite amount of time. The best object of such a quest is the indefinable, absolute illusion of the “god-particle.”

This leads to the field of Christian evidences, a close relative to apologetics. Even many Christians are not clear about their use. Evidences are beholden to the Biblical record. They cannot be used to confirm the Bible’s truth-claims or somehow add a layer of authority to the Scriptures. For some scholars, they become the building blocks of proof of an apologetic for the Noahic flood and other catastrophic Divine miracles. The evidences assume some form of a triumphant conclusion that, “The Bible stands every test we give it, For its Author is divine.”[1] But the truth of the matter is that evidences take on an explanatory role. They do not make Biblical miracles more credible but a little more understandable in their contexts.  The credibility of miracles is inherent in the authority of the Bible as apprehended correctly by supernaturally-endowed faith in the God of the Bible.

All of this forms a methodology in presenting the Biblical truth-claims regarding the Genesis flood—whether concerning the waters’ depth and devastation, the timeline of its duration, the structure, size and inhabitants of the ark, or many other facets. A personal anecdote to this methodology illustrates the point quite adequately. 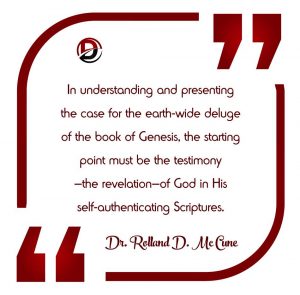 In 1966, when I was in residence at Grace Theological Seminary for doctoral work, I had the unique learning experience on how to present the flood of Noah to an audience that had elements that were not hospitable to Biblical catastrophism. Dr. Whitcomb and I journeyed to Purdue University, where he was invited by a campus Christian organization to speak on the Biblical Noahic flood. There was a sizable audience of students and professors. I will never forget his openings words, after the normal greetings, thanks and other pleasantries: “Let us open the New Testament to the book of Second Peter, chapter three, verses three through 10.”

With that groundwork, he launched into some of the basics of The Genesis Flood for about 45 to 50 minutes, with Q&A at the end. Most of the questions, naturally, were based on uniformitarian assumptions. Dr. Whitcomb answered kindly and courteously, but forthrightly, in light of the Biblical testimony. To show the clarity of the Genesis storyline, he uniquely phrased the present geological testimony: “When we step out of our doors each day we are walking over the tombs and sepulchers of millions of people and animals that perished in this miraculous judgment of the true and living God.” Dr. Whitcomb then explained what this portends for the end of earth history.

I had just witnessed what he had taught for years in apologetics/evidences classes about engaging in controversial and sensitive discussions regarding Biblical truth.

Editor’s Note: Here is a short video preview of the Ark Encounter. Dr. Whitcomb will be there tomorrow, July 5, 2016, for the ribbon cutting for the Ark: