The Fifth Seal Judgment: The Martyrdom of Believers (Part 1)

The Fifth Seal Judgment: The Martyrdom of Believers (Part 1)

As we have seen, Jesus discussed the progressive nature of the tribulation judgments as He taught His disciples in the Olivet Discourse (Matt. 24-25).

The following chart is provided so that you can review the progression of these judgments in a way that may make them easier to understand:

We have been thinking about the distinctly dispensational doctrine of the birthing process of Jesus Christ’s theocratic millennial kingdom.

This chart reminds us of the importance of the first set of judgments—in particular, the first four seals, which we examined in detail in Part 23 and Part 24:

Fifth Seal: The Martyrdom of Believers

The tragic, violent, senseless beheading and murder of Christians, specifically by radical Islamic terrorists in the current world, provides a vivid picture of what will become the norm during the catastrophic, future, seven-year tribulation period. God reveals, through the inspired writer, the Apostle John, the fate of many who turn to the Lord during the tribulation period, in the description of the fifth seal judgment. Jesus Christ opens the fifth seal, and we are introduced to a group of individuals who will be murdered for openly following the one true God.

We will examine three facts regarding the murder of these yet-future saints of God. In this installment we will think about just the first of those three facts.

Revelation 6:9-11 speaks of the work of Jesus Christ, as He opens this fifth seal:

When He opened the fifth seal, I saw under the altar the souls of those who had been slain for the word of God and for the testimony which they held. And they cried with a loud voice, saying, “How long, O Lord, holy and true, until You judge and avenge our blood on those who dwell on the earth?” Then a white robe was given to each of them; and it was said to them that they should rest a little while longer, until both the number of their fellow servants and their brethren, who would be killed as they were, was completed.

Jesus Christ pulls back the fifth seal on the Divine scroll, and reveals a group of God’s people who will be murdered.

David Levy rightly states that the individuals crying out to God are those martyred during the first half of the seven-year tribulation period.[1] The 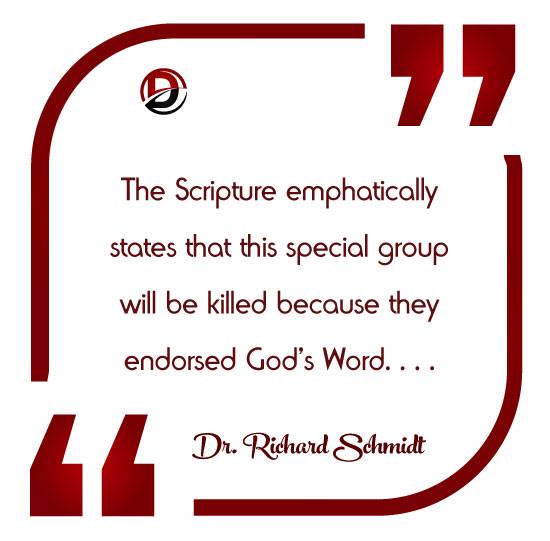 Scripture emphatically states that this special group will be killed because they endorsed God’s Word, and they had an open, public testimony of their faith in the Lord Jesus.

What a powerful motivational portrait of the believers in Jesus Christ, who despite the known dangers of openly proclaiming their love for the Lord, still act as true ambassadors of the Lord Jesus (2 Cor. 5:20).

Next time, we will consider two more facts about the murder of these tribulation saints.