Introduction
The Bible teaches that whatever God does is always for His self-glory. He exists both from Himself (i.e., He is self-existent or uncaused) and for Himself (Rom 11:36; 1 Cor 15:28b; Col 1:16). There is no higher standard for God to meet than Himself. There is nothing outside of God with which He can compare/contrast Himself nor is there anything external to God from which to offset Himself in order to define Himself. He exists in self-contained tri-unity does all things for His self-glory.

God’s glory in this sense is that esteem, enhancement, honor, worship and praise that He elicits and receives from rational beings, such as angels, humans and all the members of the Trinity. 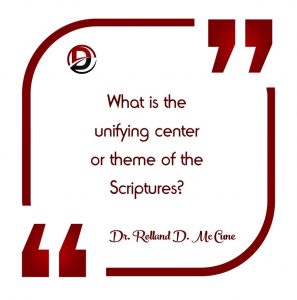 The Diversity of the Biblical Literature

The different genres of the Bible include narrative, wisdom, law, poetry, prophecy, epistle, gospel, et al. Each of these carries its own hermeneutical maxims, making it more difficult to find the central thread of Biblical teaching. Is a certain kind of Biblical literature more fruitful and important than another?

God’s activity with reference to the universe must be viewed as beginning with creation and carrying on into the eschaton, the so-called diachronic approach. What can unify God’s attitudes and work through all of this vast amount of time?

The Diversity of Themes in the Bible

The themes of Scripture generally run along the lines of systematic theology; i.e., the doctrines of Scripture, God, Christ, angels, man, sin, the Holy Spirit, salvation, church and eschatology. How do these contribute to a more ultimate Biblical theme?

The Difficulty of Constructing a Method for Finding a Unifying Center

What criteria does one use without being arbitrary and selective? Which of the recurring themes of Scripture does one include or exclude? Should the methodology be based on the total number of verses on a topic, or on the major peoples involved? Is the secret in comparing Israel’s beliefs with those of other religions in the Ancient Near East, or the Roman Empire? Is the theme to be found in one testament over the other; i.e., is the New Testament more authoritative and productive because it is later and has further revelation? 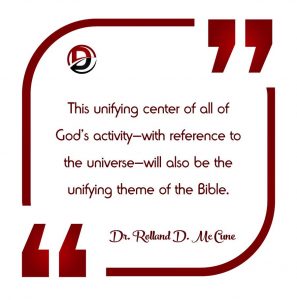 Pertinent criteria for constructing a methodology would seem to have to include at least the following: