The Blessing of God upon a Nation

The Blessing of God upon a Nation

What then was instituted was DIVISION. God, Himself, divided the world into a whole set of new political entities which He called nations. Speaking of one segment of the family of Noah, the Bible says,

From these the coastland peoples of the Gentiles were separated into their lands, everyone according to his language, according to their families, into their nations. (Gen. 10:5)

The summation of the new plan to divide the peoples of the world is then found in Scripture:

These were the families of the sons of Noah, according to their generations, in their nations; and from these the nations were divided on the earth after the flood. (Gen. 10:32)

So a new word is introduced into the language . . . NATIONS. These new and remarkable units, the nations of the world, were then segmented one from another by Divine design. We see, then, that God is against uniting nations, against a politically united world, but INDIVIDUALLY ORDAINED BY GOD, these entities have now become “the authorities that exist” (Rom. 13:1) which bring ruling order to segments of mankind and divide the world into many diverse groups.

What, then, is a nation? It is a political, economic and generic entity which claims a certain area of the world and is normally characterized by differences which are racial and linguistic. The initial array of nations on Earth were, in fact, the families of Noah after their generations. 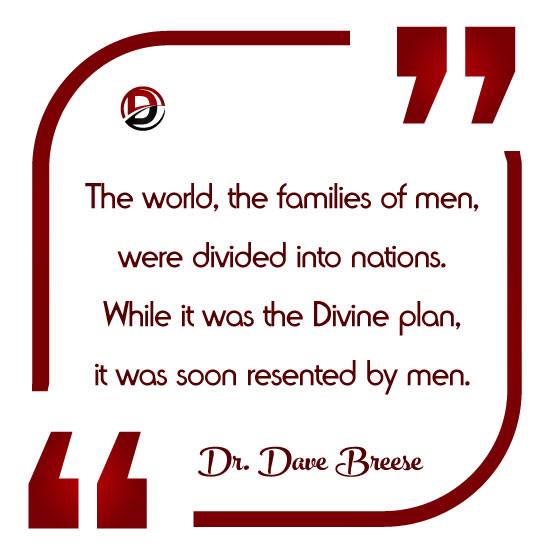 The world, the families of men, were divided into nations. While it was the Divine plan, it was soon resented by men. Somehow, the natural man, motivated by human weakness and the perversity of sin, constantly disposes himself to build a communal society. Man prefers to be disconnected from God, depending rather on multiples of his own kind (society), thereby imagining himself powerful because of his numbers. With this perverse disposition going strong, the human race engaged again in self-evaluation and decided it must make a name for itself. It instituted, therefore, a plan for uniting once again and proceeded to organize itself internationally in disobedience to the will of God. Conferring together, these foolish fathers of humanity said,

“Come, let us build ourselves a city, and a tower whose top is in the heavens; let us make a name for ourselves, lest we be scattered abroad over the face of the whole earth.” (Gen. 11:4)

“Let us make a name”! How often in history has this cry been repeated! (Our English word for it is denominate.) Men decided that it was, in fact, possible to build some strong human base, some earthly anchor to which they could hold, so as to brace themselves against the winds of the resented Divine plan. Because man is a sinner, the Divine plan was that he be scattered across the face of the earth. This would make it difficult for man, in his iniquity, to organize himself on an international political basis. Whenever man attempts to do this, his organization tends to become an anti-God thing. It becomes, in the process, a very anti-human, cruel thing, as well.

The world’s plan for a new society was soon frustrated, however, for who can withstand the will of God? Man, with his feeble schemes and little systems, is no match for THE POWERFUL WILL OF GOD working in the lives of nations. So God said,

“Come, let Us go down and there confuse their language, that they may not understand one another’s speech.” So the LORD scattered them abroad from there over the face of all the earth, and they ceased building the city. (Gen. 11:7-8) 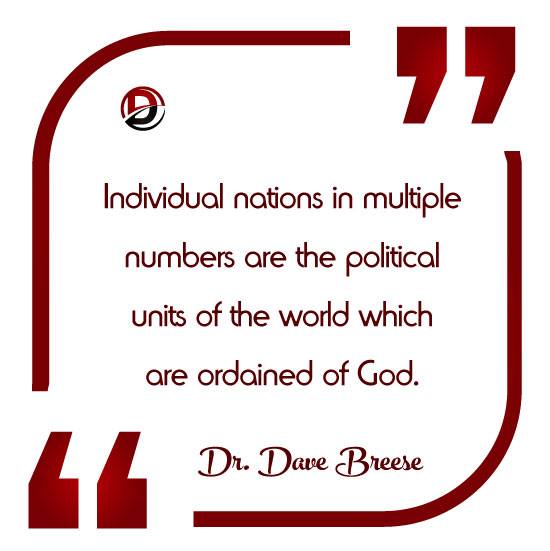 The lesson then is clear. Individual nations in multiple numbers are the political units of the world which are ordained of God. Coercive combinations of nations—large international councils where kings and parliaments lend their authority to one another—these movements quickly tend to be satanic rather than Divine. It is the devil who would organize a communal world. He then sets it against God (as indeed, one day he will—cf. Rev. 13). It is God who divides sinful men from one another. He does this for a most important purpose—that of preventing man from foolishly trusting himself and forcing him to trust the God in whom, alone, is strength. Men and nations, however organized and interdependent, cannot succeed when they posture themselves in an attitude of rebellion against the will of the eternal God.

Having taught us that plural nations are the Divine design, the Bible, we would expect, must surely give us that basis on which THE BLESSING OF GOD comes upon a nation. It must, we would certainly assume, give us the opportunity to know the policies which make for national greatness and conversely, the false principles which cause nations to fail. The fate of a nation; on what does it depend? Does the Bible tell us these things? Yes, it does!

We must not forget the first, the paramount principle that, according to the Bible, produces the fate of a nation. This quality, stated in the Word of God, says,

Righteousness exalts a nation,
But sin is a reproach to any people. (Prov. 14:34)

The quality which is of the greatest importance in determining the fate of a nation is, therefore, NATIONAL RIGHTEOUSNESS.

There is a second quality which is closely tied to the fate of a nation, and that quality is INTELLIGENT, MORAL LEADERSHIP.

The Spirit of the LORD spoke by me,
And His word was on my tongue.
The God of Israel said,
The Rock of Israel spoke to me:
“He who rules over men must be just,
Ruling in the fear of God.
And he shall be like the light of the morning when the sun rises,
A morning without clouds,
Like the tender grass springing out of the earth,
By clear shining after rain.” (2 Sam. 23:2-4)

Jesus Christ spoke on a significant occasion to His disciples and their friends, addressing the issue of their influence in this world. His words are full of present application and prophetic import. He said,

You are the salt of the earth; but if the salt loses its flavor, how shall it be seasoned? It is then good for nothing but to be thrown out and trampled underfoot by men.
You are the light of the world. A city that is set on a hill cannot be hidden. Nor do they light a lamp and put it under a basket, but on a lampstand, and it gives light to all who are in the house. Let your light so shine before men, that they may see your good works and glorify your Father in heaven. (Matt. 5:13-16)

This remarkable, indeed unbelievable promise of national survival and prospering to nations who are friends of Israel began in the pages of the Old Testament:

Now the LORD had said to Abram:

“Get out of your country,
From your family
And from your father’s house,
To a land that I will show you.
I will make you a great nation;
I will bless you
And make your name great;
And you shall be a blessing.
I will bless those who bless you,
And I will curse him who curses you;
And in you all the families of the earth shall be blessed.” (Gen. 12:1-3)

The Word of God clearly promises a blessing on those who bless Jerusalem and delivers the frightening threat of a curse upon those who lift a hand against her. Our generation should know by personal experience how true this is. 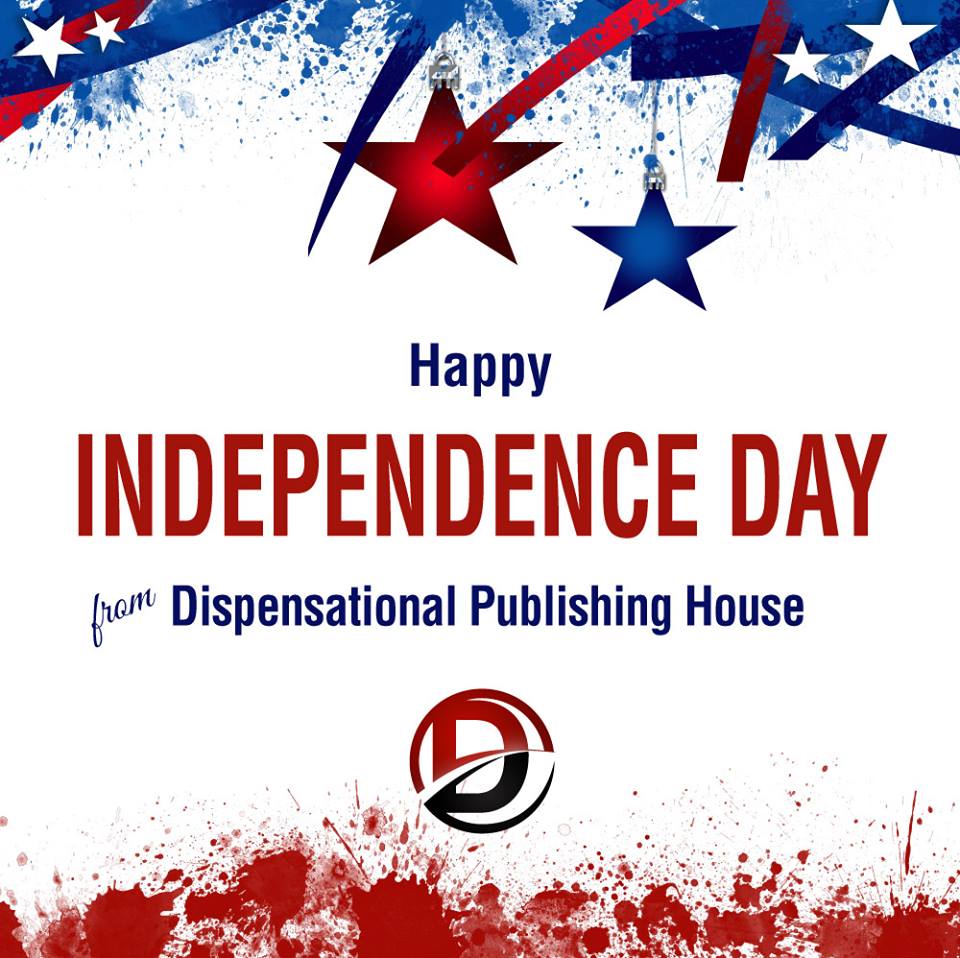