The Biblical Prominence of the Flood

The Biblical Prominence of the Flood

All of us need to grasp, first of all, the Biblical teaching about the prominence of the flood.

Let us start with Genesis 6:17 – “I Myself am bringing floodwaters on the earth, to destroy from under heaven all flesh . . . everything that is on the earth shall die” (cf. Gen. 7:4). Then,

Further details of the magnitude and uniqueness of the flood are provided in Genesis 8, ending with this promise:  “I will never again curse the ground for man’s sake . . . nor will I again destroy every living thing as I have done” (Gen. 8:21). This is confirmed in Genesis 9 with the rainbow covenant:

What did our Lord Jesus Christ say about the flood? “As the days of Noah were,  so also will the coming of the Son of Man be . . . . The day that Noah entered the ark . . . the flood came and took them all away” (Matt. 24:37-39). “Them” here speaks of unbelievers. Note carefully: the flood took all unbelievers away. If the flood did not cover the entire earth, could not some people have survived? Why did God command Noah to spend 120 years to build an enormous ark (cf. Gen. 6:3-15) if the flood was not global?

Noah’s faith in God’s Word was the key to his survival:

“By faith Noah, being warned by God about things not yet seen, in reverence prepared an ark for the salvation of his household, by which he condemned the world, and became an heir of the righteousness which is according to faith” (Heb. 11:7; NASB).

The Apostle Peter confirmed the universality of the deluge with these words: “The Divine longsuffering waited in the days of Noah, while the ark was 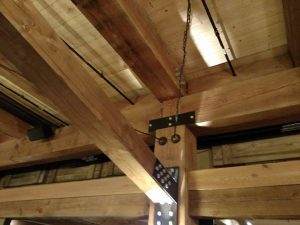 being prepared, in which a few, that is, eight souls,  were saved through water” (1 Pet. 3:20). During those 120 years, Noah was faithfully warning people of God’s coming judgment of the entire human race: “God . . . did not spare the ancient world, but saved Noah, one of eight people, a preacher of righteousness, bringing in the flood on the world of the ungodly” (2 Pet. 2:4-5).

The Holy Spirit, the ultimate author of the Bible (1 Pet. 1:10-11), tells us to “stir up your pure minds by way of reminder . . . that you may be mindful of the words which were spoken before by the holy prophets” (2 Pet. 3:1-2). Let us ask Him to illumine our minds as we examine these final words in His Word on the reality and significance of the flood.

Scoffers will come in the last days, walking according to their own lusts, and saying, “Where is the promise of His coming? For since the fathers fell asleep, all things continue as they were from the beginning of creation.” For this they willfully forget: that by the word of God the heavens were of old, and the earth standing out of water and in the water, by which the world that then existed perished, being flooded with water.” (2  Pet. 3:3-6).

Not millions of years of uniformitarian evolutionism (which I was taught at Princeton University in 1942-43, and which is taught in almost all acccredited universities in the world today), but a global catastrophe of water only a few thousand years ago. 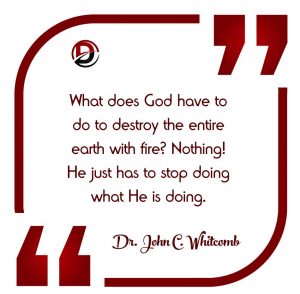 And what is about to happen? “The day of the Lord will come as a thief in the night, in which the heavens will pass away with a great noise, and the elements will melt with fervent heat; both the earth and the works that are in it will be burned up” (2 Pet. 3:10).

What does God have to do to destroy the entire earth with fire?  Nothing!  He just has to stop doing what He is doing night and day, namely, holding us in existence by an invisible thread—His infinite power to preserve the world until His Kingdom comes (cf. Matt. 6:9-13). Since those atomic bombs fell on Hiroshima and Nagasaki in 1945, we understand that the end of everything we see could be today. But our God is not only all-powerful,  He is also all-gracious. He saved those who believed that the ark could carry them safely through the flood. And He saves people today who accept His invitation: “I am the door. If anyone enters by Me, he will be saved” (John 10:9).

Come to Me, all you who labor and are heavy laden, and I will give you rest. Take My yoke upon you and learn from Me, for I am gentle and lowly in heart, and you will find rest for your souls. For My yoke is easy and My burden is light (Matt. 11:28-30).

May we be like those in ancient Greece who heard Paul and Silas preach the gospel and “received the word with all readiness, and searched the Scriptures daily to find out whether these things were so” (Acts 17:11).

Editor’s Note: Here is the video of the July 5, 2016, ribbon cutting ceremony for the Ark Encounter, which included Dr. Whitcomb:

Dr. John C. Whitcomb is heard weekly on Encounter God’s Truth, a broadcast outreach of Whitcomb Ministries. He has been a professor of Old Testament and theology for 65 years and is widely recognized as a leading Biblical scholar and a father of the modern creationism movement. It is a tremendous privilege to include him as a contributing author for Dispensational Publishing House.

Copyright © 2016 by Dr. John C. Whitcomb. Used by permission of the author.