The Textually-Based Locus of Meaning

The Textually-Based Locus of Meaning

To review very briefly, there are four essential principles that we must keep in mind if we are going to have a proper understanding of literal interpretation. The first three are the univocal nature of language, the jurisdiction of authorial intent and the unitary authorship of Scripture. The final element for literal interpretation is the textually-based locus of meaning. We began studying that topic in the previous installment of this series, and pick up with it here.

The Textually-Based Locus of Meaning
The only legitimate tool for extracting the univocal, authorially-intended and textually-based meaning of any given Scripture is grammatical-historical exegesis. Whatever meaning that cannot be gained by an exegesis of the text (the words) simply is not there. All other such “meaning” must be imported into the text or read into the text from elsewhere, and partakes of sensus plenior in some form or degree. Sensus plenior includes all alleged meaning that is not textually based, i.e., not in the words of the passage. This encompasses all multiple meanings, senses, fulfillments and the like.  Sensus plenior in whatever shape or form assumes that words can take on some kind of an autonomous afterlife of new and different meaning once they have left the author. But this post-authorial afterlife is inherently unstable and self-defeating because the expanded meaning must be gleaned by someone, and his own interpretations therefore are also subject to expansion and resignification. Communication is thus impossible and meaning is lost in a labyrinth of ever-increasing relativism and ambiguity. 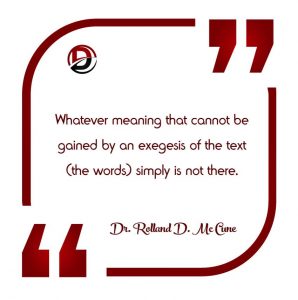 How does one arrive at the “fuller sense” of a passage if the meaning is not textually based and grounded in authorial intent as discussed before? Part of the baggage of a fuller sense is that it introduces the need for a method or an instrument of interpretation that can extract the essentially different meaning from somewhere external to the text in question. Since, in this scheme, meaning is not ultimately textually based and is not finally what the human author intended and wrote, one cannot use normal grammatical-historical hermeneutics on the text at hand.

One can resort to the Holy Spirit’s “leading” in finding the fuller sense or deeper meaning of a text. That is, the Spirit more or less “reveals” what God intended and knew but which the human author neither intended nor knew. But this seems tantamount to some kind of continuing revelation and denies in practice the concept of a closed canon for this age.

A more conservative and popular method of finding the deeper meaning is Waltke’s “Canonical Process Approach.”[1] This says that later revelation in the Biblical canon will give the meaning that the Divine Author knew and intended but of which the human author was oblivious. Generally speaking, this means that the New Testament will round out the meanings and senses of an Old Testament passage. Elliot Johnson’s concept of “references plenior” appears to be but a variation of Waltke’s approach.[2] Johnson seems to say that the truth intention of a Biblical author may end up having more than one referent in the same words.  If so, it would require that the locus of these multiple referents be elsewhere than in the immediate text.

Sensus plenior in any form, or by any other name, is bereft of any objective limiting concept; i.e., the meaning of words is always open-ended.