The Second Temple period realized the distinctly dispensational transition from the Law of Moses to the church age and the proclamation of the gospel of the grace of God (cf. Acts 20:24; Eph. 3:1-7; Col. 1:24-29). Christians are encouraged to understand and accept this major theological and functional change in God’s relationship with humankind, as these truths are essential for interpreting all eschatological, prophetic, dispensational truths in Scripture (cf. 2 Tim. 2:15; 2 Pet. 1:20-21). In this article and the one that will follow, we will examine four major events that occurred from the start of the Second Temple period through the distinctly dispensational transition from law to the church age, the dispensation of grace.

The Return to Jerusalem
God used the Babylonian empire, under the leadership of King Nebuchadnezzar, to conquer Judah, and lead the Jewish people captive to Babylon during three deportations, 605 B.C., 597 B.C., and 586 B.C. God determined that the Jewish people would remain in captivity for 70 years (cf. Jer. 25:11; 29:10) for failure to adhere to the mandated land Sabbaths that occurred over 490 years (2 Chron. 36:21). When the 70 years were completed, God began His sovereign plan to bring His people back to the Promised Land and commence building the second temple (2 Chron. 36:22-23; Jer. 29:10; Ezra 1).

Cyrus, the founder of the Persian Empire, conquered the Medes in 549 B.C. and became the ruler of the combined Persian and Median Empire. In 539 B.C., Cyrus conquered Babylon (Dan. 5:30) and the very next year he issued a decree that the Jews could return to Jerusalem and rebuild the temple (cf. 2 Chron. 36:22-23; Ezra 1:1-4).[1] Isaiah prophesied that Cyrus, the future king of the Medo-Persian empire, would order the release of the Jews to return back to Jerusalem for the specific purpose of building the temple (Isa. 44:28).

The Rebuilding of the Temple 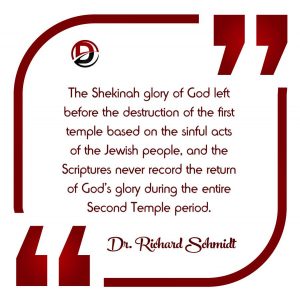 The Jewish people who returned to Jerusalem built the second temple, completing it in 515 B.C. Artaxerxes, in a subsequent decree in 444 B.C., sent another wave of Jews back to Jerusalem under Nehemiah to rebuild the city walls (cf. Neh. 1-2). The temple once again provided the Jewish people with God’s chosen edifice where the Mosaic and Levitical Laws commanded by God for worship, including the sacrificial system, would take place.

The Rebellion
Scripture clearly states that the heart of man “is deceitful… and desperately wicked” (Jer. 17:9). Isaiah similarly records:

The Jewish people, like all human beings, are born with a sin-cursed nature (Rom. 3:10-23; 5:12). Despite the fact that God brought His chosen people back to the Promised Land and provided the resources to build the second temple, the hearts of the Jewish people still turned against the one and only true God. The Shekinah glory of God left before the destruction of the first temple based on the sinful acts of the Jewish people (cf. Ezek. 10:4-18), and the Scriptures never record the return of God’s glory during the entire Second Temple period.