A Report on the Ark Encounter (Part 3)

A Report on the Ark Encounter (Part 3)

Answers in Genesis is billing the Ark Encounter as being, “Bigger Than Imagination.”

At 510 feet long, 85 feet wide and 51 feet high, this slogan is no exaggeration. Of course, most people who visit the Ark will hope to see more than just a sizable structure. What will they find if they come?

Over the course of Tuesday and Wednesday, I spent a total of about five hours inside the Ark. Here are some general observations regarding the things that I saw as I toured this gigantic structure.

The dimensions of the Ark were arrived at by using the Hebrew long cubit of 20.4 inches.

[1] The result is that the Ark is “the largest timber frame structure in the world.” [2]

According to the Ark Encounter website: “The Ark had the same storage capacity as about 500 standard semi-trailers. A standard livestock trailer holds about 250 sheep, so the Ark had the capacity to hold at least 120,000 sheep.”[3]

There is lots of room for growth in the ark, as there are vast spaces that are currently unused.

And speaking of vast spaces—there are also lots of them that you will be drawn to look at. Which takes us to our next point.

The construction of the Ark has been extremely well-documented, as Answers in Genesis has produced videos from the start of the project to display the progress. It is also well-known that the structure was largely 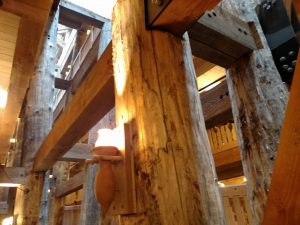 built by Amish carpenters—and the results are truly amazing.

The Ark offers breathtaking views through its more than three stories of massive wood beams, splashed as they are by the sun as they project upward toward skylights built into the top of the Ark.

Anyone with a modicum of interest in carpentry or woodworking will be fascinated with the Ark. Anyone who is interested in learning more about life and culture in the time of the Bible will also be interested in the structure and many of the basic elements that it contains.

If you are already familiar with the Creation Museum, you may expect the Ark to be very familiar. And you will certainly find a good deal of similarity in the nature and character of some of the exhibits. But that is largely where the similarity ends. 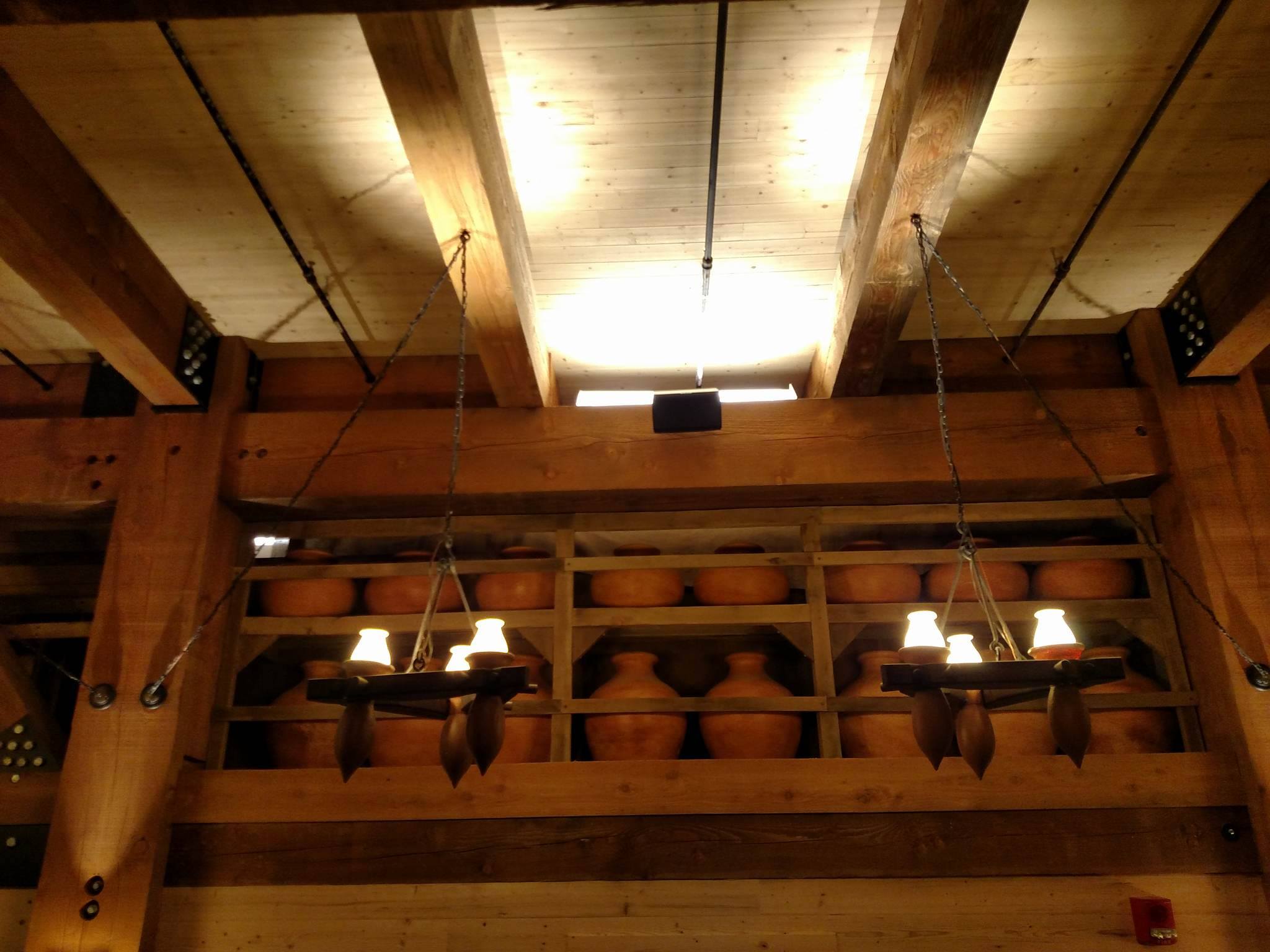 Unlike the Creation Museum, the Ark is truly focused around a singular subject, and the entire structure is devoted to bringing that subject to life in a realistic way.

To put it another way, the Ark is not merely additional space for the Creation Museum. It is all about Noah, his family, the animals and the flood that they went through together inside that structure.

The Ark is located about a mile from the entrance to the property and the parking lot, and no one is allowed to drive their vehicles or walk to the Ark. Everyone must walk up to a shelter and stand in line to wait for shuttle buses that will take them to the Ark. After you get off the bus near the Ark, there is still a fair amount of walking to do in order to get in line for the Ark. You will be out in the elements for much of this time.

When you add to this the amount of energy that you will expend walking from the basement underneath the structure of the Ark up to the third floor, you may find that by the end of your tour you have gotten in some pretty good exercise.

Of course, a lot of what this will look like in the future depends on the completion of building projects still being planned.

This brings me to the next point.

As of Wednesday, there is still construction being done on the Ark—and more work to do on some of its exhibits. Workers are still going full speed, and I believe I saw some changes from Tuesday to Wednesday. The 1,500-seat stand-alone restaurant (Emzara’s Kitchen—named for Noah’s wife, based on artistic license) was not yet open. I was not certain if the Ararat Ridge Zoo or the petting zoo were open while I was there, but they are scheduled to be running soon, along with the Screaming Eagle Zip Lines and animal rides.

Of course, in one sense, I am sure that the Ark will never truly be finished, and things will be changed and improved on a continual basis. Future plans call for a theater and a walled city. There are also plans to build a 700-seat restaurant into the very top of the Ark, above the third deck.

The Ark Encounter is not ultimately about the size, shape or even the purpose of the Ark. It is about the fact that Noah’s ark stands as a sign to the world of God’s judgment and grace. Just as there was but one door where people could enter the ark and be saved from a global catastrophe involving sure and imminent death, so today there is only one door through which we may pass to enter into eternal life.

God had instructed Noah to build that door into the ark: 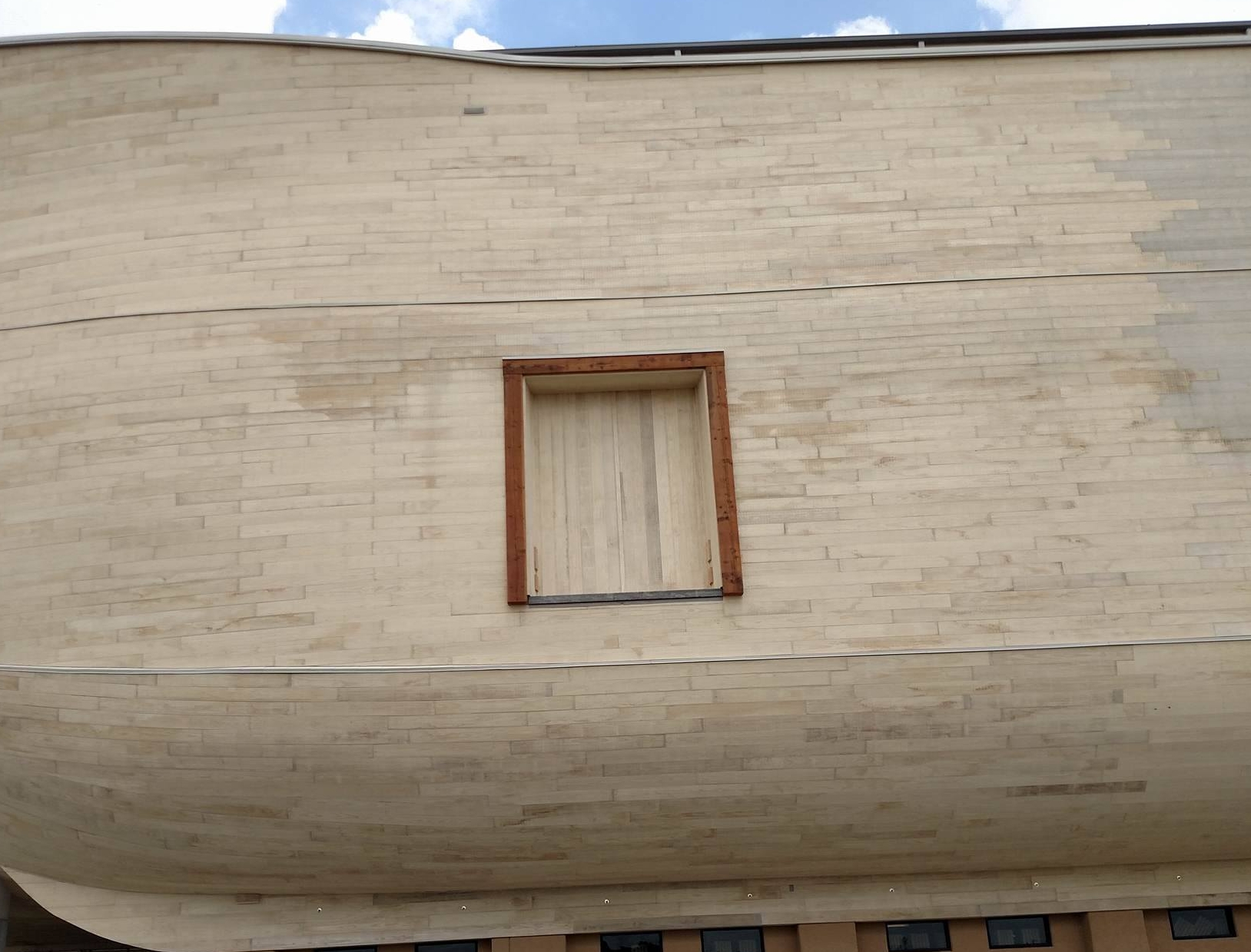 You shall make a window for the ark, and you shall finish it to a cubit from above; and set the door of the ark in its side. You shall make it with lower, second, and third decks (Gen. 6:16).

So those that entered, male and female of all flesh, went in as God had commanded him; and the Lord shut him in (Gen. 7:16).

Jesus applied the analogy of a door to Himself, explaining that He exclusively is the way of salvation:

Then Jesus said to them again, “Most assuredly, I say to you, I am the door of the sheep. All who ever came before Me are thieves and robbers, but the sheep did not hear them. I am the door. If anyone enters by Me, he will be saved, and will go in and out and find pasture (John 10:7-9).

I greatly enjoyed my visit to the Ark Encounter, and always relish an opportunity to stop in at the Creation Museum. Which will ultimately be my favorite? I would say that it is too early to tell, as there is still so much to be added to the Ark.

In the meantime, I recommend that you visit the Ark. It will give you an entirely new perspective on a subject of such pivotal importance in the Bible.

And if you have not yet seen the Creation Museum, now would be the perfect time to go and tour both. You will not be disappointed with your decision.

Photos within the article are by Paul J. Scharf