The first time I saw the name and picture of Dr. Tim LaHaye was on his commentary called, Revelation, Illustrated and Made Plain (Zondervan, 1975). I was probably no more than 10 years old.

The first time I met him was less than three weeks ago, at the Ark Encounter, as I described here on our blog.

In between, he made a profound impact upon my life, albeit from a distance.

Turk’s widow, Jeanne, offered some remembrances of their 10 years at those institutions—the first half of which was spent under Dr. LaHaye.

“He was our pastor,” she said. “Ralph would preach for him off and on. He had three different churches—three different locations—that were Scott Memorial Baptist Church.”

Jeanne worked for both Tim and Beverly LaHaye in their ministry called Family Life Seminars. She specifically worked on LaHaye’s famous temperament test, and input the information into a very large word processor. She remembered that LaHaye gave her great latitude as he delegated responsibility to her.

“I got to know Beverly really well,” Jeanne said. “I enjoyed working with them. He was definitely a choleric. He was always on to the next project. He left quite a legacy.”

“He was a very good preacher,” she said. “We enjoyed his preaching”

“He was a good guy, a good friend. So gracious,” she said. “When Dave got sick, he was so willing to take over the television program (The King Is Coming) for a year.”

“He and Bev are good friends through many, many years. Dave and Tim were good friends. We just loved him a lot. He was a great man. A great champion for the Lord.”

“Dave was on a television show with him way back,” Carol Breese remembered. “They would find themselves in the same conferences so often. Their theology was the same.”

In October of 2014, I interviewed Dr. LaHaye via Skype for an article that ran in the January—March 2015 issue of Answers Magazine, called “Creation Never ‘Left Behind'” (Vol. 10, No. 1, p. 21). I remember that Saturday afternoon when I talked to him very vividly. Truthfully, he gave me far more than I needed for the interview. I sensed that he enjoyed the opportunity to share the burden of his heart. It was almost as if he were not providing responses for a magazine interview, but rather speaking to a live audience that desperately needed to hear the message.

In the last few months, I had the ability to utilize my connection to Dr. LaHaye on behalf of Dispensational Publishing House. Recently, I worked with his daughter Linda Murphy to compile the following quote, which had yet to run during this month of emphasis on the Ark Encounter: 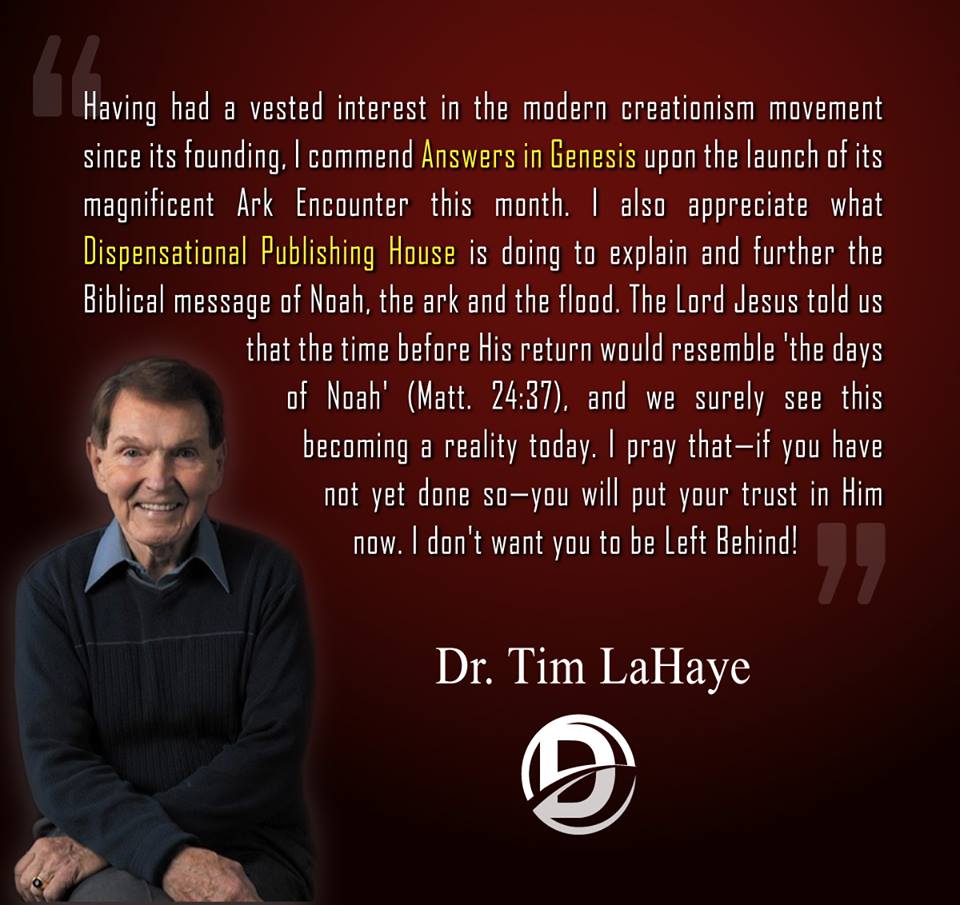 One by one, the great dispensational Bible teachers of the past are exiting the stage. We are saddened for ourselves, even though we need not weep for them. Yet we wonder who will take their place . . . perhaps, even, if anyone will remember and make use of the precious gems of wisdom that they gave us during their long and fruitful ministries.

Now, more than ever, the need for Dispensational Publishing House comes so clearly into focus. We must help to preserve the best of the teaching that we have received from the great men of the past, even as we continually raise up faithful new voices that can reach into the future.

May God help us to do so, for His great glory, until Christ returns.

Behold, I tell you a mystery: We shall not all sleep, but we shall all be changed—in a moment, in the twinkling of an eye, at the last trumpet. For the trumpet will sound, and the dead will be raised incorruptible, and we shall be changed. For this corruptible must put on incorruption, and this mortal must put on immortality. So when this corruptible has put on incorruption, and this mortal has put on immortality, then shall be brought to pass the saying that is written:“Death is swallowed up in victory.”

The sting of death is sin, and the strength of sin is the law. But thanks be to God, who gives us the victory through our Lord Jesus Christ.

Therefore, my beloved brethren, be steadfast, immovable, always abounding in the work of the Lord, knowing that your labor is not in vain in the Lord (1 Cor. 15:51-58).