Reflections on the Life of Robert L. Thomas, Th.D.

Reflections on the Life of Robert L. Thomas, Th.D.

The New Testament puts heavy emphasis on using the mind as the principal avenue to Christian growth.[1]

Dr. Robert L. Thomas modeled this truth in his own life and ministry in the Word of God. Throughout his teaching ministry (1959–2008) he applied his brilliant, God-given mind to Bible study, research, writing, and teaching. That career culminated in December 2014 with Dr. John MacArthur announcing the awarding of professor emeritus status to Dr. Thomas in honor of his 49 years of full-time teaching on the graduate level (1959–2008).

As a member of the Evangelical Theological Society from 1961 until the present, Dr. Thomas gathered with his peers and helped to guide the society. He served as secretary-treasurer, Far West Section (1969–1970); vice-chairman, Far West Section (1970–1972); chairman, Far West Section (1972–1973); led in the formation of a new section for the Pacific Northwest (named the Northwest Section); National Membership Committee member (1979–1982; 1984–1988); vice-president, president-elect and president (1988–1990); and executive committee member (1990–1994). Throughout the history of the Dispensational Study Group in ETS, Dr. Thomas attended the meetings, presented papers and engaged his peers in the ongoing discussions of hot-button topics.

On the pastoral side of things, Dr. Thomas declared:

Interpretive issues are in reality inseparable from how Christians should live. And conversely, how believers conduct themselves must be in response to sound interpretation of the Bible. Sound doctrine and wholesome practice always go together. The church must always beware of ever thinking that either one can successfully exist without the other.[2] 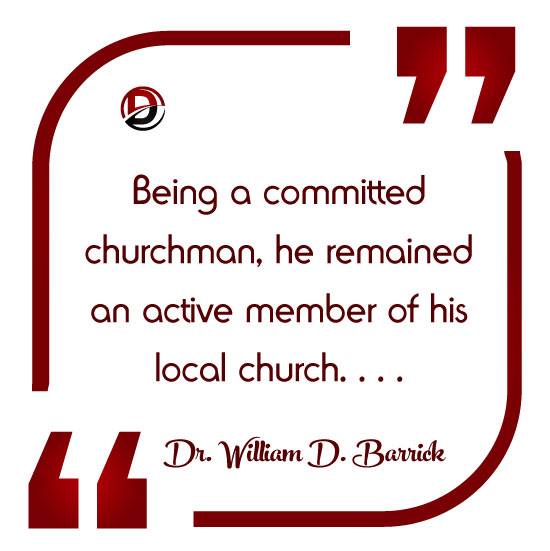 Being a committed churchman, he remained an active member of his local church (Anaheim Community Church, Anaheim, Calif.) and a member of the Independent Fundamental Churches of America (later IFCA International; 1966–present). In addition, he became involved in missions as a member of the board of directors of the Orinoco River Mission (1966–1971) and of the board of directors for the Bible Church Mission (1968–1982).

Dr. Thomas accepted a role on the translation team for the New American Standard Bible in 1961. Upon completion of the translation of the New Testament, he continued on the translation committee pursuing continuity in the translation of the Old Testament. With the translation completed, he persuaded The Lockman Foundation to pursue the production of the New American Standard Exhaustive Concordance. He led that enterprise and engaged proofreaders, computer specialists and linguists in the project (most served with him on the Talbot Theological Seminary faculty and staff). This concordance received the Gold Medallion Book Award as the outstanding Bible reference work of 1981–1982 by the Evangelical Christian Publishers Association. Dr. Thomas also participated in the conference sponsored by the International Council on Biblical Inerrancy in the fall of 1978. This council of evangelical scholars formulated and published the “Chicago Statement,” which serves as the standard evangelical position on Biblical inspiration and inerrancy.

As my Greek professor all through seminary, he laid the foundation for my life of preaching the New Testament. Whatever impact my preaching and writing on the New Testament may have is a direct result of his skill and passion for precision in handling the Word of God.[3]

Dr. Thomas’ scholarly pursuit of New Testament studies and publication resulted in a number of key works through which pastors, teachers and students alike find spiritual meat fit for their King’s table: 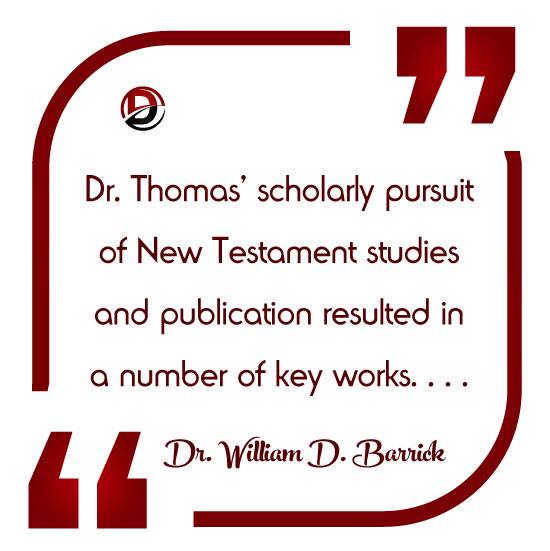 Preunderstanding in a theological realm that operates under the guise of the analogy of faith has frequently caused the misreading of Scripture in realms of eschatology and theology. That is a pitfall to be avoided by setting aside subjective bias in favor of using objective exegetical criteria in interpretive decisions.[4]

Nowhere was this concept more evident than in Dr. Thomas’ commentaries on the Thessalonian epistles and the book of Revelation. His careful and detailed exegetical analysis anchored his conviction concerning premillennial dispensationalism. In relation to his dispensational convictions and love of eschatology, he contributed the entries for “Dispensationalism, Progressive,” “Marriage Supper of the Lamb” and “Revelation, Dating the Book of,” in the Dictionary of Premillennial Theology, edited by Mal Couch (Kregel, 1996). He also wrote entries for other well-known encyclopedias and dictionaries such as Zondervan Pictorial Encyclopedia of the Bible (1975), Evangelical Dictionary of Theology (Baker, 1984), and Nelson’s Illustrated Bible Dictionary (Thomas Nelson, 1986). As executive editor of The Master’s Seminary Journal from 1990 until 2011 he oversaw its publication and contributed numerous articles, most of them focused on the topics of hermeneutics, Biblical inerrancy, eschatology and dispensationalism.

It would be remiss of me not to speak more personally of Dr. Thomas, who was a colleague at The Master’s Seminary for more than 12 years of my 20 years associated with that institution. At the faculty interview before I was hired, Dr. Thomas led the faculty examination of my background, experience, theology, hermeneutics, Biblical languages and Bible translation principles. His persistent bulldog-like questioning endeared him to me for his love of the Lord, the Word and theological soundness. 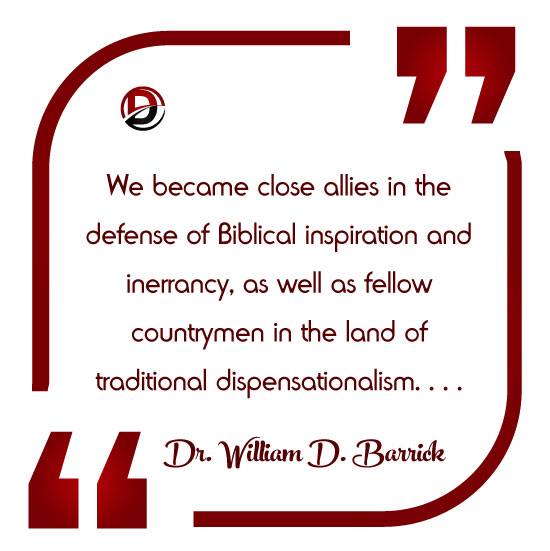 We became close allies in the defense of Biblical inspiration and inerrancy, as well as fellow countrymen in the land of traditional dispensationalism (not to be confused with the system of Larkin or the current day’s neglect of accurate exegetical argumentation by many who claim to be classical dispensationalists). Sometimes we were known as tough professors—though I hasten to point out that he has the better reputation for his strictness in regard to scholarly excellence.

Of the many privileges God has granted me in my lifetime, being a friend and colleague of Robert Thomas has been one of the highest. We all will miss him, his drive, his love of Christ and His Word, his winsome smile, gentle mannerism and soft Georgia drawl. 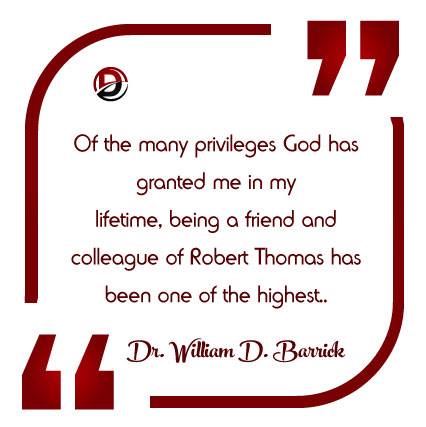 Robert L. Thomas diligently presented himself “approved to God as a workman who does not need to be ashamed, accurately handling the word of truth” (2 Timothy 2:15).

Copyright © 2017 by Dr. William D. Barrick. Used by permission of the author.

The photo of Dr. Thomas is used with permission of The Master’s Seminary.