The Purposes of Human Language

The Purposes of Human Language

Human language had a disruption at the incident of the Tower of Babel (Gen 11:1-10). There was an initial unity of human language; there was “the same language and the same words” (Gen. 11:1). (The KJV has “of one language, and of one speech” [Gen. 11:1]. The NIV has “one language and a common speech” [Gen. 11:1].) There was an organic unity of speech. Vocabulary and syntax were a comprehensible unit understood by all.  Communication was swift. Philologists and linguists fairly agree that there was a parent language to all the languages of the world, based on similarities of vocabulary, grammar and syntax. No one knows what the original language was, although until the 19th century the theory that it was Hebrew was practically unquestioned.

There was a miraculous disruption of the linguistic unity and the immediate formation of different language groups. God moved miraculously into the situation and confused the one language system into different language systems. This caused a series of mutually unintelligible language groups to arise instantaneously with all its resultant confusion. God thereby caused immediate internal barriers within the people themselves, which frustrated their original intent of a monolithic political unity. Their intention to create an imperialistic one-world power and to “make … a name” (Gen. 11:4) failed.

While the confusion and fragmentation of the unified language system was miraculous, the dispersion or migration of the people from the region of Babel was a providential one. God used all manner of secondary causation. The scattering probably took the form of isolated family groups. All others would be suspect because of the inability to 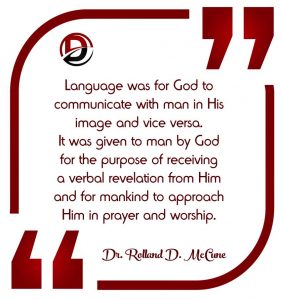 communicate. The scattering caused distinct racial or ethnic groups to appear. The latent genetic variations in the human race had a chance to appear in the various isolated groups. Languages began to evolve or change and develop, as they are doing today. New words would appear in vocabularies, new expressions arose, and whole new language systems developed.

Note that it seems evidently not God’s will for the human race to engage in “one-worldism,” which leads to monolithic totalitarianism or authoritarianism and repression of human rights. It also causes the rapid spread of iniquity. Sin reaches unparalleled proportions in its ultimate expressions in such a society.  One-worldism will eventually pave the way for Antichrist, who will have such a universal government. Nationalism restrains and reduces sin.

False Theories About the Origin of Human Language
The theories listed below, among others, are based on some kind of instinctive, non-rational, imitative notions.

This says that human language is no more than the evolving of the sounds of animals such as the chirps of birds, the barks of dogs or the grunts of pigs. Sounds came to be attached to objects over the millennia.

According to Milton Terry, this theory says that there was such a sympathy between soul and body, and such a dependence of the one upon the other, that every object which in any way affected the senses produced a corresponding echo in the soul and found automatic expression through the vocal chords.[1] Language was a kind of physico-chemical reaction caused by the environment.

This says that words are an imitation of natural sounds such as the sounds of animals, noises caused by the wind and waters, and so on. These simple words were the germ of the first language. This may account for some individual words but cannot account for a language system. The sounds are not descriptive of anything.  In language, a word is a sign or symbol of a concept.

The Purposes of Human Language
Language was for God to communicate with man in His image and vice versa. It was given to man by God for the purpose of receiving a verbal revelation from Him and for mankind to approach Him in prayer and worship. Language was also for persons in the image of God to communicate with each other. It was so that people could converse with other people about God and spiritual/theological matters, which—before the entrance of sin—was all there was to talk about.