The Empty Tomb and the Nazareth Inscription

The Empty Tomb and the Nazareth Inscription

One of the longest chapters in the New Testament is 1st Corinthians 15 where the apostle Paul sets forth a series of arguments to teach his wayward church in Corinth about the reality of the resurrection of the dead. Written from Ephesus (16:8) in roughly 56 A.D., 1st Corinthians is one of the few letters that have not been questioned with regard to its authenticity. Even the primary guru of German radical historical higher criticism, F. C. Bauer (1792-1860), who superimposed Hegel’s (1770-1831) philosophy of history as an interpretive grid over the top of the New Testament documents to rearrange its history according to a Germanic form of evolutionary pantheism, admitted the apostle Paul wrote 1st Corinthians.

Paul begins chapter 15 by reminding them that the resurrection was part of the good news of the gospel itself (15:1-2) that he himself preached when he founded their church (Acts 18:1-11). While Paul had been chased out of Philippi, Thessalonica, and Berea, he presented the message of the resurrection of Christ in Athens at Mars Hill which many philosophers sneered at (Acts 16-17). When he came to Corinth, he was met by a Jewish couple who would become his dear Christian friends for many years, Aquila and Priscilla. They moved to Corinth because the Emperor “Claudius had commanded all the Jews to leave Rome (Acts 18:2).” This particular event can be dated to around 50 A.D. since the Roman historian Suetonius (69-122 A.D.) also made reference to this same event in secular history. Suetonius wrote that Claudius expelled the Jews because they were “constantly making disturbances at the instigation of the Chrestus.”

Closely related, Matthew 28:11-15 records a hot topic of conversation among the Jews that was still raging at the time of his writing of the book. While Matthew made the case that Jesus was raised from the dead, the religious leaders of Israel said the “disciples came by night and stole” His body from the tomb while the Roman guards were sleeping. Undoubtedly, such a dispute was re-lived in Rome and even in many other places where Paul traveled when he presented the death and resurrection of Christ (15:1-5) to any number of the synagogues across the Roman Empire. The people of the day were thus left with two alternatives in light of the facticity of the empty tomb. Much could still be said today as well. 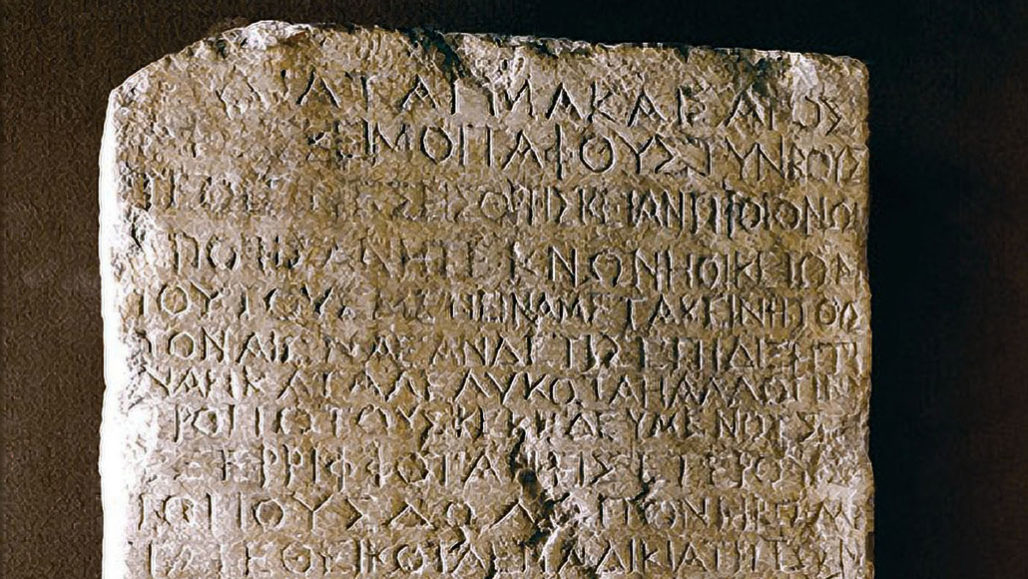 Just for example, in the 1920’s, a tantalizing marble inscription was discovered after a certain collector died. According to his own records, it was sent to him from Nazareth in 1878. Amazingly, the inscription read,

“Edict of Caesar. It is my decision, graves and tombs, whoever has made them for the religious observances of parents, or children, or household members, that these remain undisturbed forever. But if anyone legally charges that another person has destroyed, or has in any manner extracted those who have been buried, or has moved with wicked intent those who have been buried to other places, committing a crime against them, or has moved sepulcher-sealing stones, against such a person, I order that a judicial tribunal be created, just as concerning the gods in human religious observances, even more so will it be obligatory to treat with honor those who have been entombed. You are absolutely not to allow anyone to move. But if so, I wish that one to suffer capital punishment under the title of tomb-breaker.”

While it is true such edicts were common, what is both unusual and unique about the inscription is the severity of the penalty – death. Is it possible that this edict was written by Claudius or Nero related to the empty tomb debates going on among the Jews when Christianity was born? According to virtually all scholars who first examined the inscription, they agreed it was to be dated back to the first half of the first century A.D.

Very recently, however, Kyle Harper of Oklahoma University and other researchers have determined the source of where the marble stone came from – a quarry on the island of Kos off the southwestern coast of modern Turkey.   Moreover, they have also suggested the Greek dialect on the inscription does not match a Nazarene background for the time, and that it could have been written anywhere between 100 B.C. to 100 A.D. They then go on to assert the Greek inscription is rather related to an ancient poem which describes how the citizens on the island of Kos desecrated the dead body of a certain tyrant by the name of Nikias after he died sometime between 30-20 B.C. The author of the poem was also connected to the Roman court so that scholars believe the simplest explanation of the inscription was that Caesar Augustus (63-14 B.C.) decreed the edict in light of what happened on the island of Kos.

Yet, Harper wrote earlier that no such universal edicts over other such kingdoms like the island of Kos under Roman control were given as early as Caesar Augustus. Such edicts only came after the great turn of the centuries from B.C. to A.D.  Harper also likewise admitted that the Herodian dynasty, which ruled Judea for almost 80 years between 37 B.C. to 39 A.D., did much business and trade with the island of Kos. There is thus nothing to say that much marble was commercially transported to Judea from Kos so that it could have easily been exported/imported into Nazareth during the reign of Claudius or Nero.  Indeed, Oxford University Professor of Ancient History, Jonathan Prag, essentially said as much after examining the latest research on the inscription.

Dr. Titus Kennedy of Biola University further cautions that while the testing may show the marble might have indeed been taken from Kos, or perhaps from another quarry with very similar chemical composition, this still “does not prove that the Nazareth Inscription was inscribed in Kos or applied to a historical situation in Kos. During the Roman period, marble was imported into regions such as Judea and Galilee, and Herod the Great is known to have imported marble specifically from Kos. It is a possible scenario that the marble stone used for the Nazareth Inscription could have been imported from Kos, but carved in the area of Judea, Galilee, or the Decapolis after an edict was sent by letter from the Emperor. During the Ottoman period in the 19th century Nazareth was a tiny village, not a hub of the antiquities trade, and therefore an unlikely place for a Roman inscription to be imported from a faraway place and then sold.”

More to the point, the Nazareth Inscription is an edict which seems to be far more concerned about desecrating common graves in general than related to the situation at Kos. The Nazareth Inscription is also strangely concerned about forbidding the practice of moving bodies from one grave to another, which again, does not match what happened at Kos. Further, the edict also forbids moving “sepulcher-sealing stones” like that which would have covered the tomb of Jesus in Judea.

Furthermore, the Kos poem says the disgruntled citizens broke open “the bolts” of the king’s “tomb, and dragged out the poor hard-dying wretch to punishment.” This is yet another mismatch, and a rather large one at that. It thus seems a lot of money and energy has been spent to provide another possible alternative answer to the Nazareth Inscription that in some sense, actually suggests yet again, the edict was indeed given because of the great disputes over the empty tomb of Christ that continues to reverberate down to today’s world as well – even in places like Oklahoma and Oxford Universities. The actual content of the inscription itself is still more important than the isotopes of the particular marble that it was inscribed upon.

Mark Musser is a part-time missionary, author, and a farmer, depending on what time of day and year it is. His home is in Olympia, Washington, but he spends most of his time on the mission field in the former Soviet Union. He is currently a doctoral candidate at Corban University in Salem, Oregon, and is a contributing Writer for the Cornwall Alliance.  His book Nazi Ecology provides a sobering history lesson on the philosophical foundations of the early German green movement, which was absorbed by National Socialism in the 1930s and proved to be a powerful undercurrent during the Holocaust. He is the author of Nazi Ecology.