Traveling back from the Steeling the Mind conference in Ceour d’Alene, ID, my family and I spent a half day touring Temple Square and the LDS Conference Center in Salt Lake City, UT. Here are some of my thoughts, and pictures.

The Temple, like each local “ward,” is specifically designed to look like a church. What takes place in the Temple is far from Biblical. 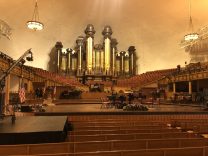 An LDS Tabernacle is a meeting hall. The Temple is a place for cult ceremonies.

This message is at the core of Mormonism, and the premise is readily accepted by most of Evangelicalism. 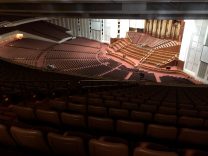 A view from the balcony of the LDS Conference Center, with its 21,000 seats. 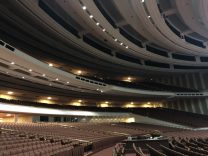 Where the fake prophets speak to the deceived – Mormon Conference Center. 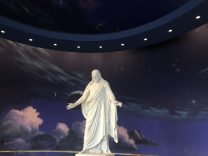 Though this statute looks like most artist renderings of Jesus, it is actually an artists depiction of a made-up diety who is the offspring of a sexual union between another deity and his wife. The Mormon “Jesus” is clearly NOT the Biblical Jesus.

Randy White is the founder and CEO of Dispensational Publishing House, Inc. He teaches Bible online at www.RandyWhiteMinistries.org and preaches at the Taos (NM) First Baptist Church.