Editor’s Note: Dr. Andy Woods is the author of Dispensational Publishing House’s very first published volume, The Middle East Meltdown. In this two-part blog series, Andy updates some very recent events that show just how relevant and important the information in this book is. We are also working on a teacher’s guide to complement the book. You can watch an interview with Andy from our first-ever DPH Author Hangout, held Tuesday, Aug. 23, 2016, at the bottom of this page.

Therefore thus says the Lord GOD, “Now I will restore the fortunes of Jacob and have mercy on the whole house of Israel; and I will be jealous for My holy name. . . . Then they will know that I am the LORD their God because I made them go into exile among the nations, and then gathered them again to their own land; and I will leave none of them there any longer. I will not hide My face from them any longer, for I will have poured out My Spirit on the house of Israel,” declares the Lord GOD (Ezek. 39:25, 28-29).

Middle East Chaos
Russia and the Middle Eastern nations always seem to be in an ongoing state of flux. Here are just a few events in the region that have transpired within the scope of just the last few weeks. 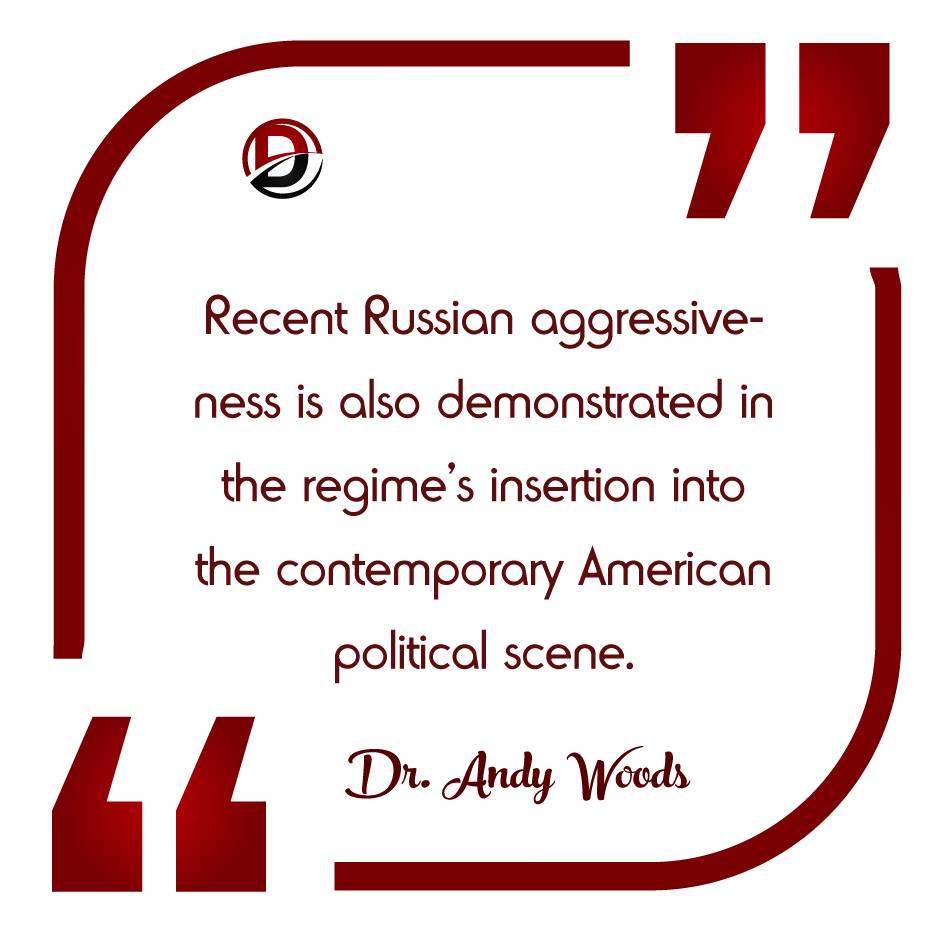 Let’s Talk Turkey
Turkey is in the news again. A recent failed coup attempt has given Erdogan, the current president of Turkey, the opportunity to further solidify power. This failed coup attempt has allowed Erdogan to shut down media outlets as well as round up academics and other potential dissidents to further solidify his dictatorial grasp of power on the nation.[1] In fact, circumstances have worked so strongly in Erdogan’s favor that some have speculated whether the coup was a real coup at all. Perhaps the affair was staged by Erdogan surrogates, thereby giving him an excuse to further tighten his grip even more over a country that most believed was already firmly within his control.[2] Interestingly, Turkey is a member of NATO. However, these recent events have further driven a wedge between the United States and Turkey. In fact, Erdogan has gone so far as to blame the failed coup as being somehow instigated by the United States government.[3]

Russian Bear Rising
Russia is also in the news. While American military expenditures and readiness have decreased under the Obama Administration, the Russians have been busy developing new weapons as Russia rehearses for war with the West. In fact,

The kind of weaponry Russia is believed to be testing includes: A device that uses acoustics to locate the position of snipers so they can be killed; Drones that fly in pairs – one lower than the other to draw fire while the other pinpoints targets; Text messages sent to entire communities minutes before an attack to create confusion and panic by spreading misinformation; Ways of making the enemy’s GPS navigation system falter and get them lost on the battlefield; Devices in civilian vehicles which can intercept soldiers’ communications.[4]

Recent Russian aggressiveness is also demonstrated in the regime’s insertion into the contemporary American political scene. Here is just one example:

More Russian ties to Trump’s manager Paul Manafort have been exposed by an anti-corruption investigation in Ukraine, where he used to advise the pro-Russian President. . . . Just another indication of the shady connections between Trump’s campaign and Putin. This is the same guy who said he had nothing to do with the change in the Republican platform from a pro-Ukrainian position to one more favorable to Putin – it turned out that he just brazenly lied about it. So what’s the deal here? Is he still secretly working for Putin? Is it just a coincidence that the Russians hacked the DNC and it showed up at Wikileaks to damage Hillary? . . . OH, and I almost forgot another coincidence – when Ivanka takes time off from the grueling campaign, guess which good friend she hangs out with? Would you believe…Vladimir Putin’s girlfriend? “Ivanka Trump is taking a break from the campaign trail to vacation with friends. The daughter of GOP nominee Donald Trump shared a scenic snap with Wendi Deng Murdoch, the ex-wife of billionaire media mogul Rupert Murdoch, from Dubrovnik, Croatia. Trump, 34, was spotted with husband Jared Kushner in the city’s old town, seemingly taking a couple’s vacation without their three children – Arabella, 5, Joseph, 2, and Theodore, 4 months. Deng Murdoch was actually responsible for setting up Trump and Kushner.”[5] 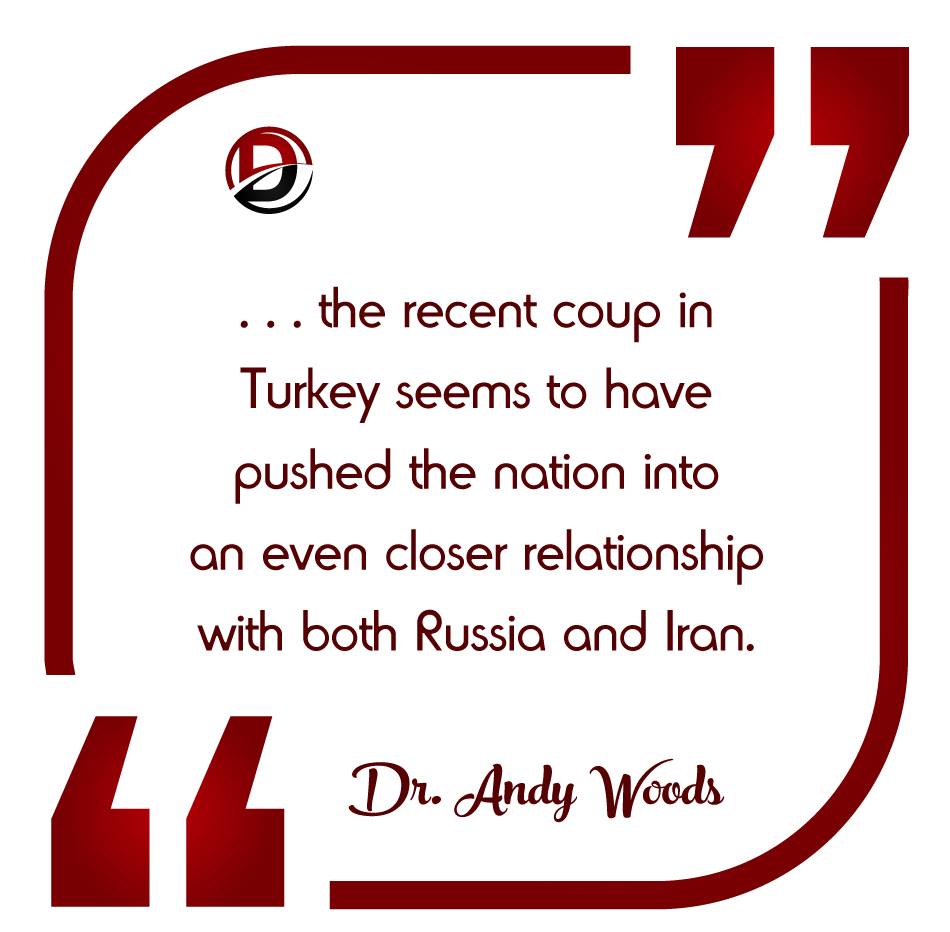 Strange Bedfellows
Alliances between Russia and various Middle Eastern countries are also in the news. Take for example the burgeoning relationship between Turkey and Russia. The relationship between the two countries was frosty, to say the least, when Russia flew a plane into Turkish airspace causing the Turkish government to shoot down the Russian plane. Putin’s Russia responded with brutal sanctions against the Turkish government. However, recently Turkey’s Erdogan has become quite cozy with Russia.[6]  Erdogan decided to use the recent coup in Turkey to blame the United States as the culprit of the coup, thereby using this scenario as a pretext for reaching out to Putin’s Russia.[7]

In fact, the recent coup in Turkey seems to have pushed the nation into an even closer relationship with both Russia and Iran. “The most significant prospect in the coup aftermath is the possibility of further rapprochement with Russia and Iran to settle regional problems.”[8]

Dr. Andy Woods is a prolific author and speaks nationally on Bible prophecy and related issues. He is senior pastor of Sugar Land Bible Church in Sugar Land, Texas, a full professor at the College of Biblical Studies in Houston and an adjunct professor at Dallas Theological Seminary. We greatly value the opportunity to work with him as a contributing author to Dispensational Publishing House.

Copyright © 2016 by Dr. Andy Woods. Used by permission of the author.

[4] “Fears grow Russia is using the Ukraine battlefield to rehearse for war with the West,” Mirror, <http://www.mirror.co.uk/news/world-news/fears-grow-russia-using-ukraine-8600944>; Internet; accessed 16 August 2016.