A third component of the image of God in man is morality. This has to do with powers which inform one of right and wrong and enable him to act accordingly. A fourth aspect is spirituality. This is the capacity for fellowship with God, to understand and participate in spiritual things, the capacity for eternal life, and the like.

A last capacity in the image of God has to do with physical considerations.

There seems to be a physical dimension to the image of God since man did indeed have a body as a result of being created in the image of God (Gen. 2:7). One way of understanding this is in the sense that Adam’s body anticipated Christ’s body in the incarnation. God made Adam’s body after the blueprint or pattern for the enfleshment He had determined for Christ. The triune God was incorporeal before the incarnation; all the persons of the Trinity were spirit beings. Physical factors regarding God at the time of creation were largely anticipatory. God, however, undoubtedly was a Christophany (a pre-incarnate appearance of Jesus Christ) when He walked daily in the garden (Gen. 3:8), and no doubt was also on Day Six when he made man’s body “from the ground” (Gen. 2:7).

In Biblical thought, beginning in the Old Testament, the body is a necessary ingredient in the human personality. It is the vehicle for the other aspects to function and express themselves, including the use of rational propositional speech. The human is a self composed of a material and an immaterial aspect in a unified, ontological, individual personality. Human beings are not thought of in terms of two or three clearly distinguishable parts but in an essential monism that is only theoretically divisible. 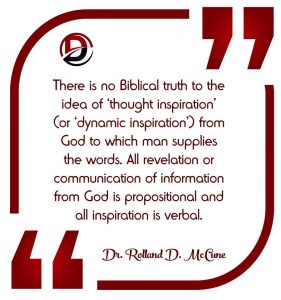 Language is the product of the mind.[4] Logos proceeds from nous. This is seen in Genesis 1 as applicable to God (He spoke things into existence, called them good, etc.) and in Genesis 2 to man (he named the animals and woman). Man is a self-conscious being, therefore he is a speaking being; he is capable of syntactical word associations that are propositional and thus intelligible. Thinking (rational thought) does not begin until man is objective to himself. Since man replicates God on a finite level, his speech is patterned after God’s “speech,” especially His speech to man.

Language (words) proceeds from the essential unity of thought and speech. The Biblical idea of “word” incorporates both thought and speech. Thought is actually inward speaking, and speech is really audible thinking. Intelligible speech is simply the sensibly perceptible announcement of inward speech. I.e., it is inward speech verbalized by vocal chords and heard by ears. Personal, rational beings cannot think apart from language. There are always words by which thought is thought.  That is why there is no Biblical truth to the idea of “thought inspiration” (or “dynamic inspiration”) from God to which man supplies the words. All revelation or communication of information from God is propositional and all inspiration is verbal.

Language was possessed and used spontaneously by the first man Adam in naming the original animals (Gen. 2:19-20). The “kinds” of air-breathing land animals were objects to the senses of Adam but his mind penetrated and perceived the size, shape, traits, mannerisms and all the distinctives of each one, and he used language to express those characteristics meaningfully. The names corresponded to the natures or characteristics of the animals. This shows the high intellectual and rational capacities of unfallen Adam. He could perceive each characteristic of each animal, store all of them in his memory bank and, after he had seen all of the different animals (probably in the hundreds if not more), instantly recall each characteristic, distinguish in his mind each animal from the others on the basis of these characteristics and give names that distinguished one animal from another corresponding to its own characteristics, all in a matter of hours on Day Six!