Is Dispensational Thought Monolithic, on a Continuum or Neither?

Is Dispensational Thought Monolithic, on a Continuum or Neither?

Non-dispensationalists rail against the dispensational approach to the Bible because the system is allegedly inconsistent, if not heretical, in soteriology.[1] Often a hypothetical straw man is devised as to what dispensationalists supposedly must believe. Multiple ways of salvation are usually the first mentioned, i.e., being saved by works under law and by faith under grace. That false notion has long been dead in dispensational thought but the objectors refuse to bury it.

It must be admitted that dispensationalists themselves have sometimes contributed to the idea that their approach to Scripture is fairly monolithic, that is, that dispensationalism demands certain necessary interpretations on a wide range of doctrines. For example, in the imputation of Adamic guilt, a realistic/seminal headship and not a representative/federal framework is frequently demanded on dispensational grounds. Lordship salvation is sometimes vigorously eschewed and a Keswick model of sanctification is embraced. The ministry of the Holy Spirit in the Old Testament can be greatly bobtailed in the thinking of many dispensationalists. The Spirit is thought to have had no regenerating ministry and certainly no permanent indwelling of Old Testament saints. He “came and went,” and while He “came” He was still “upon” or “with” the person but never “in” him. The assumption is that these and other doctrines are incompatible with the dispensational system. As a hedge some may say they are dispensational “without maps and charts” and thus escape some of the issues.

In truth, dispensationalism impacts directly only three doctrines. In eschatology, a pretribulational, premillennial rapture of the church as well as a millennial Jewish theocratic state are mandated. In ecclesiology, the church is fundamentally distinct from the Old Testament theocracy and occupies a specific period of history. In pneumatology, the baptism of the Holy Spirit is the unique, non-experiential ministry in the formation of the body of Christ in the present age.

To be sure, other doctrines and ministries are indirectly affected by a dispensational understanding of Scripture. For example, the nature of the Messianic kingdom as a Jewish-oriented government precludes an inaugurated “already/not yet” configuration, as well as a “churchy” type of millennium. The nature of the kingdom also curbs any programs to presently “ex 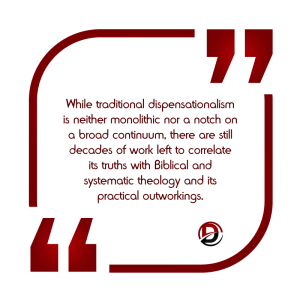 tend the kingdom,” or “bring in the kingdom,” especially through the social activism of the institutional church. Nor can the church implement kingdom ethics on a global, regional or even local scale. The dispensational doctrine of a growing apostate professing church dampens the hopes and dreams of ecumenical brotherhood through cooperative efforts or mergers. Other such examples could be developed where dispensationalism indirectly makes an impact to some degree.

Almost every analyst recognizes that the crux of the matter is hermeneutical, especially the use of the Old Testament in the New Testament. This issue separates traditional dispensationalism from covenant theology and those who borrow heavily from it, including progressive dispensationalism. It also calls into question the idea of some sort of an amalgamated continuum among all dispensational claimants. The consistent use of literal/normal interpretation in the Old Testament is underpinned by the Divinely-created laws or rights of human language via “the image of God” in man (Gen. 1:27). This method yields a correlated approach to both testaments of Scripture. Such hermeneutics precludes the resignification, expanded meanings of words or other notions of replacement theology. Therefore one does not find truth distinctive to the Christian church in the Old Testament nor is such New Testament truth extrapolated into the Old Testament.

This above interpretive principle, however, does not suggest that there is an understanding, unique to dispensationalism, of justification by faith, the genuine and complete human and Divine natures of the God-man, the omnipresence of God, the inspiration and inerrancy of the Scriptures or election to personal salvation, to name a very few. In that sense dispensationalism is not monolithic. But there are still many areas where dispensationalism needs to be correlated into a better understanding. One such area that I have thought a lot about is the kind of life and walk with God under the Old Testament dispensations, especially law. I am of the opinion that those days are greatly under-appreciated at the least, even in our own circles. Those saints of God rejoiced in their life under the old covenant, and words could hardly express their love of “the law of Moses” (Josh. 8:31). Read the Psalms.

So while traditional dispensationalism is neither monolithic nor a notch on a broad continuum, there are still decades of work left to correlate its truths with Biblical and systematic theology and its practical outworkings.