And Noah builded an altar unto the Lord; and took of every clean beast, and of every clean fowl, and offered burnt offerings on the altar (Gen. 8:20).

We always need to be careful not to build a doctrine out of a historical account.

This account tells us what Noah did, and what Noah did may or may not be what I should do. Later on, in fact, we will see Noah behave in a way that we should not seek to emulate (Gen. 9:20-27).

But right now Noah is going to offer a sacrifice, and we realize that this episode took place before the giving of the law. Does this mean that we should offer a sacrifice? The answer is no—we should do only what is commanded for our dispensation.

If you start mixing the dispensations, you will start pulling illustrations and examples that, honestly, should not be pulled.

Above Genesis 8:20, the Scofield Reference Bible makes note of the fact that this is the beginning of the third dispensation: human government.

Noah did not know that he was in a new dispensation, although some things were now so totally different that it almost had to be a new dispensation. Yet, similar to his previous experience, Noah still had to offer a blood sacrifice.

The practice of offering a sacrifice began in the dispensation of conscience, when Adam and Eve had left the garden of Eden (Gen. 3:22-24) and Cain and Abel offered sacrifices (Gen. 4:3-4).

However, I think that something fundamentally different is happening here following the flood.

First of all, we assume that from the time of Cain, all the way up until the time of Noah, we have righteous men like Noah who are bringing sacrifices. The question is, when and how did people bring sacrifices? They were probably not just making it up as they went along.

Aaron’s sons, Nadab and Abihu, brought strange fire into the tabernacle (Lev. 10:1-2). This was a sacrifice that was not prescribed by God, and they died as a result of bringing it.

Using this as an illustration, we would think that a person would not simply make up how to offer a sacrifice. Since God accepted Abel’s offering and not Cain’s (Gen. 4:4-5), God must have revealed to them what they were supposed to do. People had to worship according to God’s rules.

That being the case, we must ask where Cain and Abel brought their sacrifices. The natural place for them to bring it would be to the flaming sword with the Cherubims at either side, which was a visible representation of God Himself. It would seem that if they were bringing a sacrifice to God, they would bring it to the place where they could see Him visibly.

So He drove the man out; and at the east of the garden of Eden He stationed the cherubim and the flaming sword which turned every direction to guard the way to the tree of life (Gen. 3:24, NASB).

I think that visible representation of God—keeping people from eating of the tree of life, which it protected—must have lasted until the changes brought about by the flood. 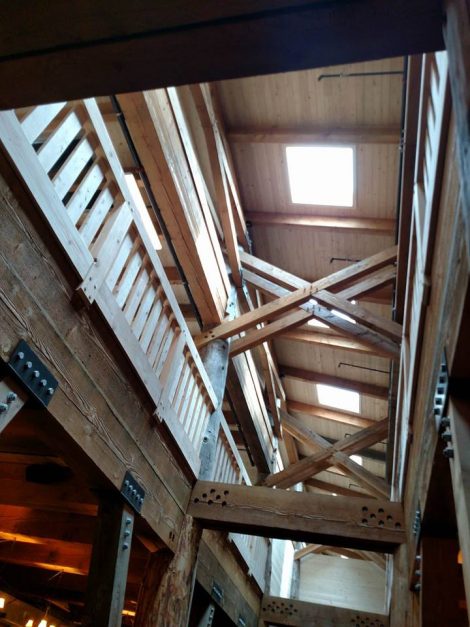 Now, after the flood, this would be the very first time that there would be no way to bring a sacrifice before the visible presence of God. This was a new dispensation, and for the first time in history there was no visible manifestation of God’s presence.

Cain had once felt like he had been cast away “from the presence of the LORD” (Gen. 4:16).

But the Lord showed Himself at Mount Sinai and in the times following, as when the Shekinah glory of God dwelt first in the tabernacle, and later in the temple. He led the people by a pillar of cloud and a pillar of fire. This presence of God finally leaves the land in the book of Ezekiel. And since those times, other than during the earthly life of Christ, people have had to live without the benefit of the visible presence of God.

We today likewise live without the visible presence of God. Sometimes people pray for a visible manifestation of God, but they probably do not really mean that. This type of prayer is dangerous, in fact, for it is something that Satan could easily mimic.

No, we will not have a visible representation of God that the whole world will see until the second coming of Christ.

Noah here is presenting an offering even though He cannot see the God he is worshiping. This surely impressed upon him—more than ever—his need for a Redeemer in accord with the promise of Genesis 3:15.

And the Lord smelled a sweet savour; and the Lord said in his heart, I will not again curse the ground any more for man’s sake; for the imagination of man’s heart is evil from his youth; neither will I again smite any more every thing living, as I have done.

This is an anthropomorphism, in which God is described in human terms. The emphasis is on the sweet savour of the sacrifice that had been given. The Lord also said something in His heart.

How do we know what God smelled, or what He said in His heart? The only way that we can know these things is by revelation from God Himself—telling us what He was doing through the pen of the author Moses.

Therefore, we must thank God for the Bible, for apart from it we could not know any of God’s thoughts!

And God was about to reveal to men the most amazing promise by means of a covenant with mankind. We will begin next time by thinking about that covenant.