Five Dispensationalists Who Changed My Direction

Five Dispensationalists Who Changed My Direction

Editor’s Note: On Saturday, Aug. 13, we will launch our Revived Classics line with a special blog article. In it, I will introduce you to some of our plans as well as the first authors that we have permission to list as those whose works we hope to “revive” in the future through the publishing of blogs, booklets, books and other resources. In preparation for Saturday’s article, I am writing two introductory pieces this week that describe how God has used some great dispensationalists—and great dispensational writings—to change my direction and shape my life. It is our prayer that the authors and works that we promote through Revived Classics will have the same effect for many years to come, until the Lord returns.

Growing up in a conservative, confessional Lutheran church and school, I was—in many ways—a most unlikely candidate to, one day, become the editor in chief of Dispensational Publishing House. With the benefit of hindsight, however, I can see the Lord’s providential guidance upon my life so clearly, faithfully leading me to this point.

To give you all the details of how I got where I am now from where I began would be a long story (and one that, I am guessing, most people are probably not longing to know). My purpose in this article is not to focus upon myself at all—but rather to honor five men who were used by God to influence my life in a profound way toward dispensational theology.

The first two are now with the Lord, and the final three are still serving Him here—and also contributing their writings to DPH.

May the Lord be glorified through this brief look back at the influence that these five dispensationalists had upon my life—each in their own unique way.

Dr. Bruce Dunn ministered for more than four decades as the senior pastor of Grace Presbyterian Church in Peoria, Ill. While I never had the privilege of meeting him in person, he certainly had a great influence upon the spiritual direction of my life.

You see, Dr. Dunn was on the front end of a methodology that we take for granted today—that is turning sermons preached in front of a live audience into radio and television programs. His media ministry was called the Grace Worship Hour, and it was broadcast on both radio and television by WVCY in Milwaukee.[1]

I can first remember watching Dr. Dunn on television on an Easter Sunday evening when I was probably in seventh grade and still a dyed-in-the-wool Lutheran. I knew there was something different about him, even though so much of what I saw looked familiar. You see, like my Lutheran pastor, Dr. Dunn wore a black-and-white clergy robe when he preached and there was a very somber tone to his message. Unlike what I was used to seeing, however, Dr. Dunn held a Bible in his hands as he spoke—and, more importantly, he explained in detail the meaning of the very words of his text.

Little did I know then that the Bible in Dr. Dunn’s hand was a New Scofield Reference Bible, or that Grace Presbyterian famously hosted the annual Moody Prophecy Conferences for several years. Dr. Dunn was one of the great dispensational Presbyterians—perhaps one of the last in that noble tradition.

But he was still around at just the right time in my life, and the Lord used him as something of a bridge to take me from where I was to a place of intense interest in the Bible and dispensational theology.

The next man that the Lord used in a significant way to move me toward dispensational theology was Dr. Dave Breese. I met him once, but not until several years after he had first made a great impact upon my life. Again, it was from a distance through television on WVCY in Milwaukee, and also through his books and newsletters.

Holding his New Scofield Reference Bible and applying Scripture to the events taking place in”the tide of our times,” Dr. Breese appeared to be offering an intelligence briefing that brought heaven’s perspective to bear directly upon the earth. He was a man of great wisdom and insight—with a voice and persona to match.

The very name of his ministry—Christian Destiny—as well as the titles of his books and booklets (like Living for Eternity and Discover Your Destiny) and the topics that he discussed (such as preparing for the judgment seat of Christ—a theme he focused on continuously) were so incredibly motivating to me as a young person. They gave me a burning desire to (as he might describe it) invest my life for a glorious purpose that would outlast the vagaries of time.

Having received a foundation through my own study, and reading and listening to resources such as those described above, as well as at the Bible church and Bible college that I attended, I understood and was committed to the basics of dispensational theology. My knowledge of dispensationalism, however, was still extremely limited.

It was not until I was already in ministry and returned to my college alma mater to take my first graduate class that I really became cemented as a dispensationalist.

Dr. McCune is the consummate professional theologian and professor, and that is why he was able to make such a profound impact upon me in just a one-week modular course. Truth be told, I left that class knowing that I needed to attend seminary (which I did begin just under a year later), and I also left it as a committed traditional dispensationalist myself.

I shudder to think how I might have been influenced in a different direction if someone of equal skill and poise—coming from a different theological perspective—had been my teacher at that critical time in my life. I am forever indebted to Dr. McCune and my life is the richer for having benefited from his excellent teaching ministry.

One of the factors that led me to choose the seminary that I attended was the opportunity to take even one class from Dr. John Whitcomb. Little did I know that I would eventually be able to sit under him for 10 seminary modules, as well as to assist him in ministry for the past 13 years and contribute his life story to a major Christian book.

Words cannot express the joy and privilege I have in being able to consider Dr. Whitcomb my professor, my theological mentor and my friend.

As both a founding father of the modern Biblical creationism movement and a highly-respected teacher of Bible prophecy—and theology in general—Dr. Whitcomb showed me firsthand that dispensationalism was not an obscurantist position relegated to contemplating “mysterious periods of sevens” (as one opponent of dispensationalism once characterized it in my hearing). Rather, he explained how it went to the very heart of the teaching of the Bible, covering all of history—from a literal creation week at the beginning to a literal 1,000-year kingdom at the end.

Dr. Whitcomb also modeled for us the concept that traditional dispensationalism was wholly compatible with the highest degree of academic credibility.

Dr. Myron Houghton is the living definition of academic credibility. I cannot believe how privileged I was to study theology under this man!

Possessing credentials that surely could have taken him anywhere, Dr. Houghton has instead chosen to minister faithfully for long periods of time in two fairly small schools. The upside of that is that the students in those schools have had the opportunity to receive a theological education of unmatched quality in an intimate academic setting.

I cannot imagine my life today without the benefit of Dr. Houghton’s theology classes. I really doubt that I will ever be able to pick up a theology book or discuss a theological concept without asking in the back of my mind, “What would Dr. Myron think?”

And it is not just that Dr. Houghton is a traditional dispensationalist. No—it is the fact that he probably studied under every major dispensational professor and theologian this side of Lewis Sperry Chafer. As with every topic he discusses, he speaks about dispensationalism not from speculation, but with primary knowledge of the subject.

His life—as indeed the life of each man listed—reminds me of the Proverb which states:

In God’s providence and grace, He has used these five dispensationalists—among others, over a long period of time—to change the direction of my life.

Several passages of Scripture stand out in my mind as a I close this post. They are as follows:

A disciple is not above his teacher, but everyone who is perfectly trained will be like his teacher (Luke 6:40).

And what do you have that you did not receive? Now if you did indeed receive it, why do you boast as if you had not received it? (1 Cor. 4:7).

For everyone to whom much is given, from him much will be required; and to whom much has been committed, of him they will ask the more (Luke 12:48).

My accountability for all that I have received—the knowledge, the education, the opportunities—will be great.

My hope and prayer—that which would make it all worthwhile—is that some unlikely young person reading this blog will also, one day, have a story to tell. 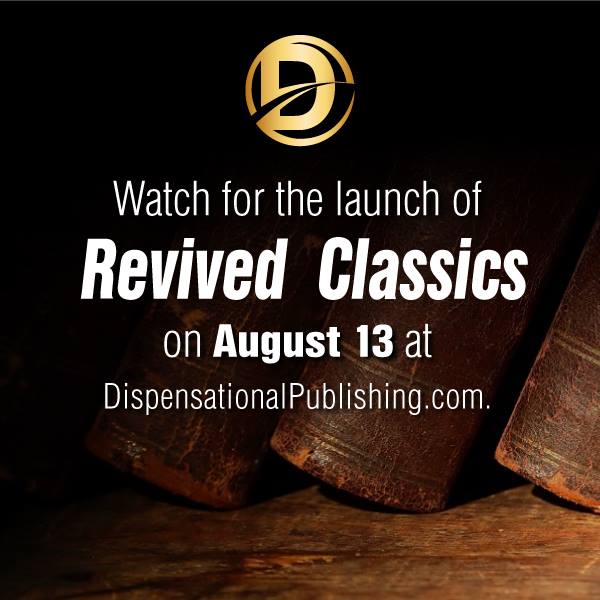 [1] Although adapted by Timeless Truth, here is an example of Dunn’s television ministry: