The Enormity and Importance of the Flood

The Enormity and Importance of the Flood

Researchers have discovered evidence of water beneath the surface of the Earth, as deep as 650 kilometers (404 miles). The vast amount of water beneath your feet is enough to fill oceans. The water, however, is not in liquid form (and is thus unavailable as a reservoir); rather, it is trapped within underground materials. The research is interesting because Bible skeptics have often inquired as to the rescinding of the floodwaters—if the Earth was covered entirely with water (cf. Gen. 7:17-24).

The surface of the Earth is composed of large slabs of rock, called plates, which rub against each other. The jostling of the Earth’s plates forces minerals within the top portions of the mantle deeper into the transition zone, which lies between the upper and lower mantles. As the minerals lower, the increasing pressure compresses them, and the components of water (hydrogen and oxygen) can become trapped into a fourth form of water (solid crystals) that is neither ice, liquid nor vapor. The water is thus locked within a mineral called ringwoodite.

Researchers used seismometers to discover the water that exists within rocks that are hundreds of miles deep within the Earth, which suggests that enough water exists within the mantles to fill the Earth’s oceans as many as three times. One geologist conjectured that all surface water originated from the 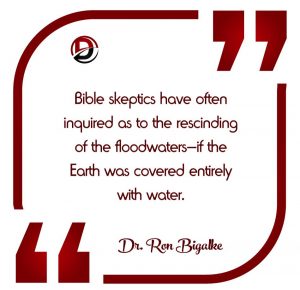 mantle early in Earth’s history, which could explain how oceans were formed by natural processes. The enormity and importance of the Flood is such that evidence of its historicity abounds within the present world.

The universal flood was one of the results when “all the fountains of the great deep burst open” (Gen. 7:11), which resulted in the elevation of the waters of the ocean and included “all the fountains of the great deep.” The bursting open of the great deep created enormous changes in the Earth’s balance, which climaxed in a worldwide catastrophe (cf. 2 Pet. 3:6). The elevation of the oceanic waters from “the great deep” coincided with the submerging of certain continents. “The water increased and . . . . The water prevailed and increased greatly upon the earth, and . . . . The water prevailed more and more upon the earth, so that all the high mountains everywhere under the heavens were covered” (Gen. 7:17-19).

At the end of 40 days, “The water prevailed fifteen cubits higher, and the mountains were covered” (Gen. 7:20). According to the Genesis record, an additional 110 days (150 days total) prevailed until “all in whose nostrils was the breath of the spirit of life, died.” God “blotted out every living thing that was upon the face of the land” (Gen. 7:21-24).

The unique nature of the flood event is unmistakable in the Lord’s statement of Genesis 8:21 (“I will never again curse the ground on account of man”). The Noahic Covenant was God’s promise that He would never again produce a universal flood (Gen. 9:8-19). The token of the covenant is a rainbow in the cloud, which is perpetual even today.

Dr. Ron J. Bigalke serves as the Georgia state minister for Capitol Commission. He also pastors a church plant through Biblical Ministries Worldwide and has taught for Bible colleges and seminaries—serving as a research associate with the University of Pretoria (missions and ethics project). He is a frequent contributor and editor for various publications through Eternal Ministries, Inc., writes for Midnight Call magazine and is general editor of the Journal of Dispensational Theology. It is with great enthusiasm that we include him as a contributing author to Dispensational Publishing House.