Ralph Turk (1930-2002) had the privilege of growing up in a pastor’s home, laying the foundation for a life of service for the Lord. His salvation at age eight provided him with years of knowing and walking with the Lord before he began his ministry.

Turk’s ministry in churches—in both rural and urban settings—for 23 years in Illinois, Minnesota and Iowa gave him great credibility in his 25 years of Bible college and seminary classroom ministry. He was at home in both the pulpit and lectern. These were not two separate ministries for him. He gave the congregation solid content in his preaching and taught with a pastor’s heart in the classroom.

As a pastor, he demonstrated a passion for Christ, compassion for people, zeal for ministry and attention to detail. He preached expository sermons so the congregation received what the Lord said, not trends or pop culture.

Though he did not neglect the Old Testament, he majored on the New Testament, thus preaching “the whole counsel of God” (Acts 20:27). His messages not only taught, they brought home the truth of Scripture by practical personal application.

In the classroom, zeal for the ministry and love for students was evident. The favorite classes he taught were homiletics and pastoral theology. Much is caught as well as taught. Thus, his ministry outside the classroom enabled his students to see that he practiced what he taught. This supplemental ministry included two interim pastorates, consistently filling pulpits and conferences in the United States and Germany.

The love and respect of the students he taught is shown by the fact that both institutions where he taught honored him by dedicating yearbooks to him. These formal honors are supplemented by a multitude of students who regard him as a key influence and mentor in their ministries.

Turk’s ministry was based upon a solid education in Bible and theology. Favorite teachers and lecturers who greatly impacted him were John Walvoord, J. Dwight Pentecost, Tim LaHaye, Henry M. Morris and Charles Ryrie. He attributes Dr. Ryrie’s tutelage as the influence that led him to become a dispensationalist by conviction. His ministry was hence characterized as championing premillennial dispensationalism.

A man’s ministry integrity is really proven in his home life. Ralph was married to Jeanne for almost 47 years. The Lord blessed their home with two adopted children—Sheryl Renee and Vincent Dwayne. He was a model husband and father. Let them tell you in their own words.

“My life as his wife for almost 47 years was blessed beyond words. He was not only a loving and caring husband, but he helped me to grow and mature in the Lord,” said Jeanne. “He had been saved since he was eight years old and was brought up in a pastor’s home; I didn’t accept Christ until I was 18 years old, so I had a lot of growing up to do. He never put me down publicly or privately; in fact, he would even say from the pulpit that he didn’t realize I wasn’t perfect until we had been married for five years! When God allowed us to go through hard times in our life and ministry, we went through those times together with the Lord. I was honored to be his wife—to be a pastor’s wife and a professor’s wife as well.  Ralph was the same man at home as he was in public—to God be the glory. The Bible verse we claimed and used together was Psalm 119:165:”

Great peace have those who love Your law,
And nothing causes them to stumble. 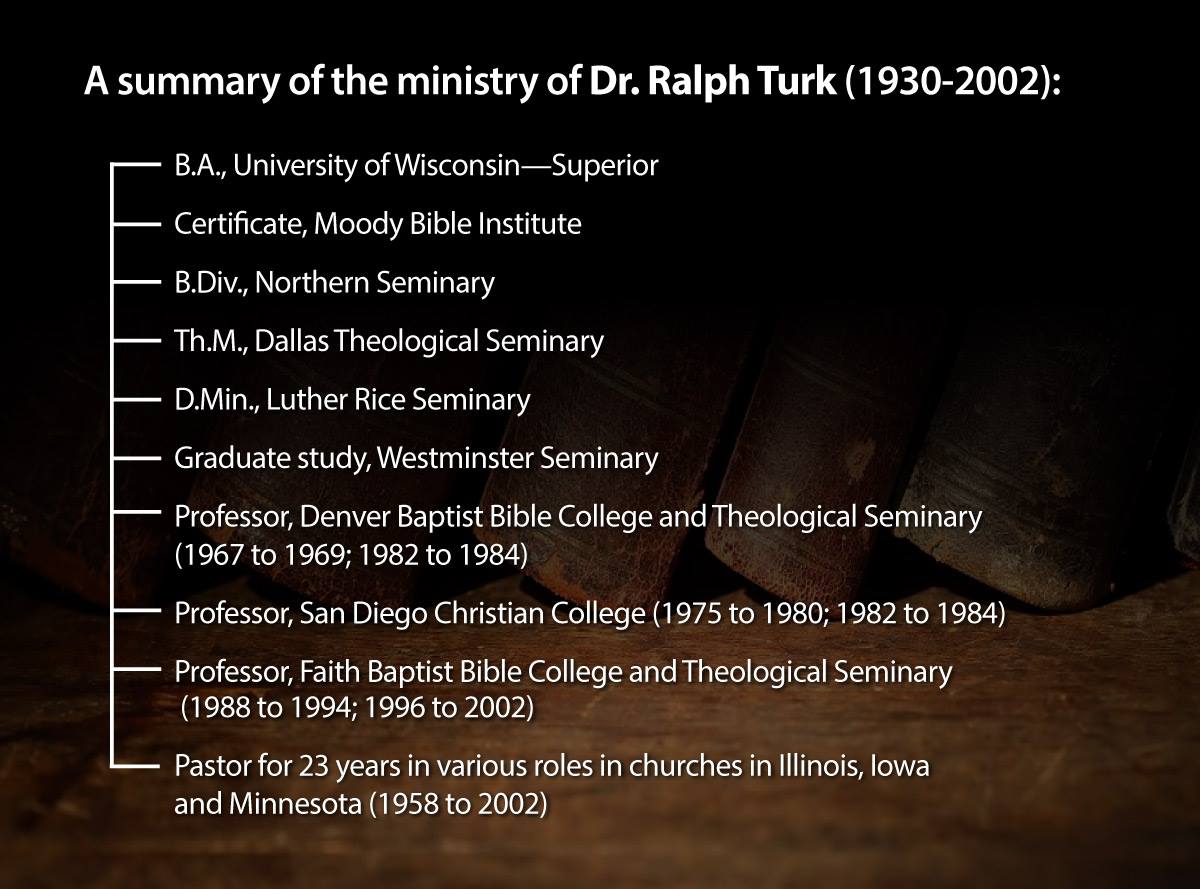 In a 1974 tribute to his father at the yearbook dedication at Christian Heritage College (now San Diego Christian College) in California, Vincent said,

There are three things that are outstanding qualities in my dad’s life. One is his willingness to listen. He’ll let me tell him just how I feel, and I know he really cares That’s when the second quality stands out. He knows and understands exactly how I feel because many times he has gone through the same thing himself. The third quality I see in my dad’s life is his outstanding love for the Word of God. It is evident in all that he says and does. And for all that I thank you, Dad.

I succeeded Turk in both pastoral and educational ministries—at Parkers Lake Baptist Church (Plymouth, Minn.) and at Faith Baptist Theological Seminary, where he served as chairman of the pastoral theology department. That gave new meaning to “big shoes to fill”! In both ministries, he was greatly loved and respected. As his successor, I had the opportunity to witness the positive impact he had and the solid ministries he built. I observed that he was an exemplary pastor, an effective teacher and a man of God.

Before he went home to be with the Lord, Turk wrote an article entitled, “Though He slay me…” (Job 13:15). Right up to the last hours of his life, his focus was the Lord. Though he is in heaven, “He being dead still speaks” in both the memory of his life and ministry and in his writings (Heb. 11:4).

You will enjoy those writings here in Revived Classics.

Dr. Ernie Schmidt served as a pastor for nearly 25 years in Alaska, Iowa, Minnesota and Montana. He taught for nearly 30 years at Pillsbury Baptist Bible College, Northland Baptist Bible College and Faith Baptist Bible College and Theological Seminary, where he also held the positions of seminary dean and interim president. He continues to serve at Faith as visiting seminary faculty and by leading trips to Bible lands. Schmidt, a graduate of Pillsbury and Central Baptist Theological Seminary, also represents Shalom Ministries—preaching extensively throughout the country. Dispensational Publishing House is blessed to be able to draw on his love for both old books and the history of dispensational theology.

Copyright © 2016 by Dr. Ernie Schmidt. Used by permission of the author.