Do We Need Miracles Today?

Do We Need Miracles Today?

Early in my ministry, I preached a sermon about miracles that went something as follows.

We reviewed a number of miracles in Jesus‘ life in the gospels, after which I made this statement, “It seems like wherever you see Jesus, miracles are happening.”

Then I made a bad conclusion—namely, that wherever Jesus is today, we should likewise be expecting miracles.

Carrying that logic further (because this is the point at which the Baptist preacher lays on the guilt trip), I would say, “The reason that we’re not seeing miracles is because we’re not walking close enough with Jesus.”

This sounds logical, but it is based upon a flawed assumption—that Jesus came merely to perform miracles.

Now, Jesus did perform many miracles, but He did it for a reason. Does that reason still exist today? That is the important question that we will examine in this concluding article of our series.

For instance, do we need Jesus to perform miracles today in order for us to know that Jesus is the Messiah and the Son of God?

The answer to that question is no, and the reason that we do not need to see miracles for this purpose is because we have an inspired record of Jesus’ miracles, and we can trust that which is given to us in the Scriptures.

Jesus’ Second Miracle
In John 4:49, we find these words in the account that we have been studying: “The nobleman saith unto him, Sir, come down ere my child die.” Obviously, the man was not deterred from asking for a miracle by Jesus’ words in John 4:48, which we considered in the previous installment.

The Lord met this man’s request with the simplest of statements: “Jesus saith unto him, Go thy way; thy son liveth” (John 4:50).

We find the key to this entire incident in John 4:50: “The man believed the word that Jesus had spoken unto him, and he went his way.”

Apparently, the man had truly comprehended Jesus’ statement in verse 48. Why? Because he exercised belief while as yet he had seen nothing.

What is it that You Need to Believe?
Are you placing your faith in miracles, or in God’s Word? I hope I see a miracle, and would love for you to see one as well. That would be a wonderful, marvelous thing. But it might get us off track—we might begin to celebrate the miracle rather than celebrating Christ. That is where our heart tends to go.

Verse 51 records the amazing way in which the man found out about the miracle the next day: “And as he was now going down, his servants met him, and told him, saying, Thy son liveth.” The significance of this startling statement is explained in verses 52-53.

This Jewish nobleman was related to King Herod—and was perhaps much more Herodian than he was Jewish. But he now placed his faith in Jesus as the Messiah and Redeemer, rather than the provision of the Herodian government, and he became a different kind of nobleman. We even find that all the members of his house began to believe upon Jesus, one by one.

We do not know the age of this son who was healed, or if he understood the significance of this event that had occurred within him, but he apparently believed, as well, at some point—perhaps later by hearing the story. 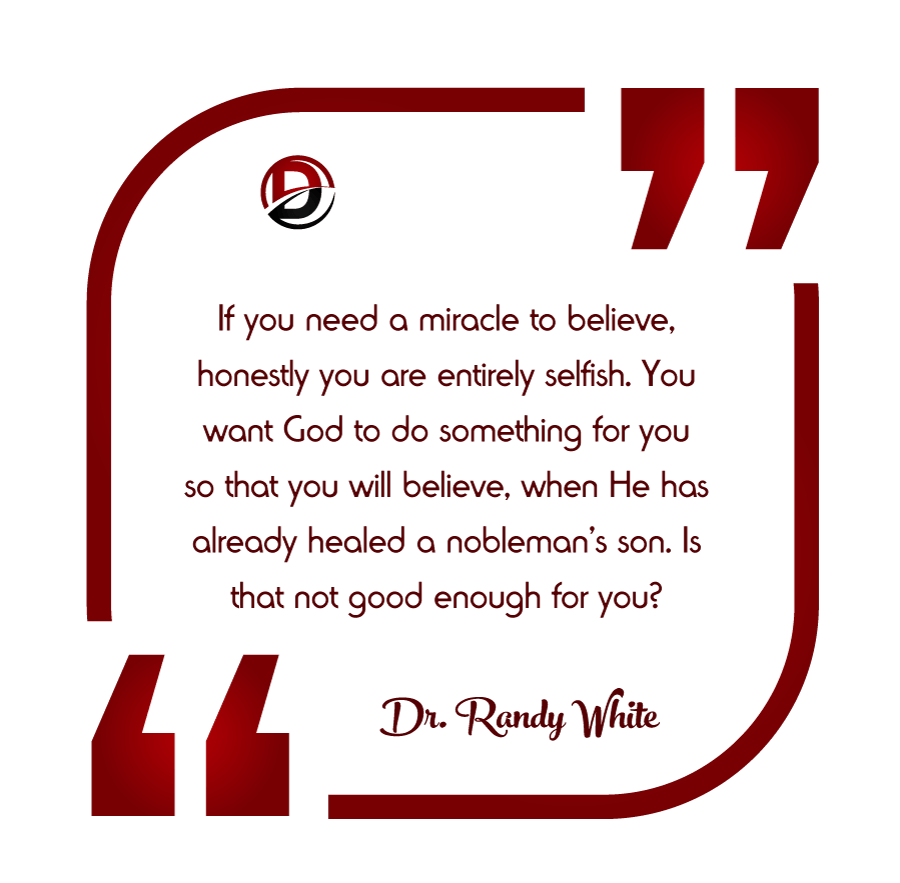 The Bible is True
If you need a miracle to believe, honestly you are entirely selfish. You want God to do something for you so that you will believe, when He has already healed a nobleman’s son. Is that not good enough for you?

The question that each of us must answer is this: Am I going to believe the words of this book? It accurately portrays the miracles this this historical figure—Jesus, the Son of God—has already done.

God recorded this event (the second of seven miracles presented in the Gospel of John) and preserved its testimony for 2,000 years so that I could read it, and I must believe it as well, for they were given for the purpose that I would believe (cf. John 20:31).

We have so much evidence that testifies to the historical accuracy and truthfulness of the text of God’s Word—which is attested in a far greater way than any other literature of antiquity.

We are tempted to be deceived away from trusting in the Word of God. Yet all of the prophecies regarding Jesus are true, as well as His miracles, and we must place our trust in Him and His finished work of dying on the cross for our sins and rising again. When we do, we can be “born again” through the truth of the gospel.

The person who says that he must see a miracle before he believes will likely never believe. God has not promised to provide you individually with a miracle so that you will believe Him. God has already given us the revelation of His Son. We come to God through faith (cf. Heb. 11:1). Faith is the undergirding of things that we cannot see, and our salvation is by grace through faith. This is truly the age of faith (cf. John 20:29).

While I do not know the name of this nobleman, I have faith that the Word of God is given accurately to me today, and this incident in his life gives me sufficient evidence to believe in the Lord Jesus Christ as the Son of God—even if I never see a miracle in all of my life.