Editor’s Note: What a wealth of knowledge and Biblical wisdom we have in Dr. Woodrow Kroll! For 23 years we listened to him on Back to the Bible, where he served as president and senior Bible teacher. Since retiring from that position, Dr. Kroll has stayed busier than ever. Endeavoring to teach the Bible to pastors with no formal education, he spends his days writing and recording theology lectures for The HELIOS Projects, which is a major focus of Woodrow Kroll Ministries. Dr. Kroll is skilled in so many areas of ministry and scholarship—just one of which is Reformation history. As we prepare to celebrate the 499th anniversary of the Reformation on Oct. 31, we thought this would be an excellent time to ask him about the intersection of dispensationalism and the Reformation. Dr. Kroll is also the author of a forthcoming book on the Christian life from Dispensational Publishing House. We trust that you will be edified and blessed by his thoughts in both that book and this interview.

Then Jesus said to those Jews who believed Him, “If you abide in My word, you are My disciples indeed. And you shall know the truth, and the truth shall make you free” (John 8:31-32).

“For 23 years with Back to the Bible, traveling and preaching in 109 countries, I kept encountering pastors in every country who were doing the best they could with what they had to work with,” stated Dr. Woodrow Kroll. “The problem is they had nothing to work with. I read a report from a missions agency that said that 95 percent of pastors had no training at all. I was retired about five days when the Lord reminded me of my promise to do something about it.”

Kroll’s words serve well to bring us up to date with his activities since he moved off of our radios in 2013. Kroll is the champion of Bible literacy, so it is only fitting that he is determined to take Biblical truth to those who have no other means of learning it. Kroll calls this the The HELIOS Projects, naming it after the Greek word for sun.

“We’re moving ahead very rapidly,” he said. “God has blessed us so significantly that I am having difficulty keeping up.” 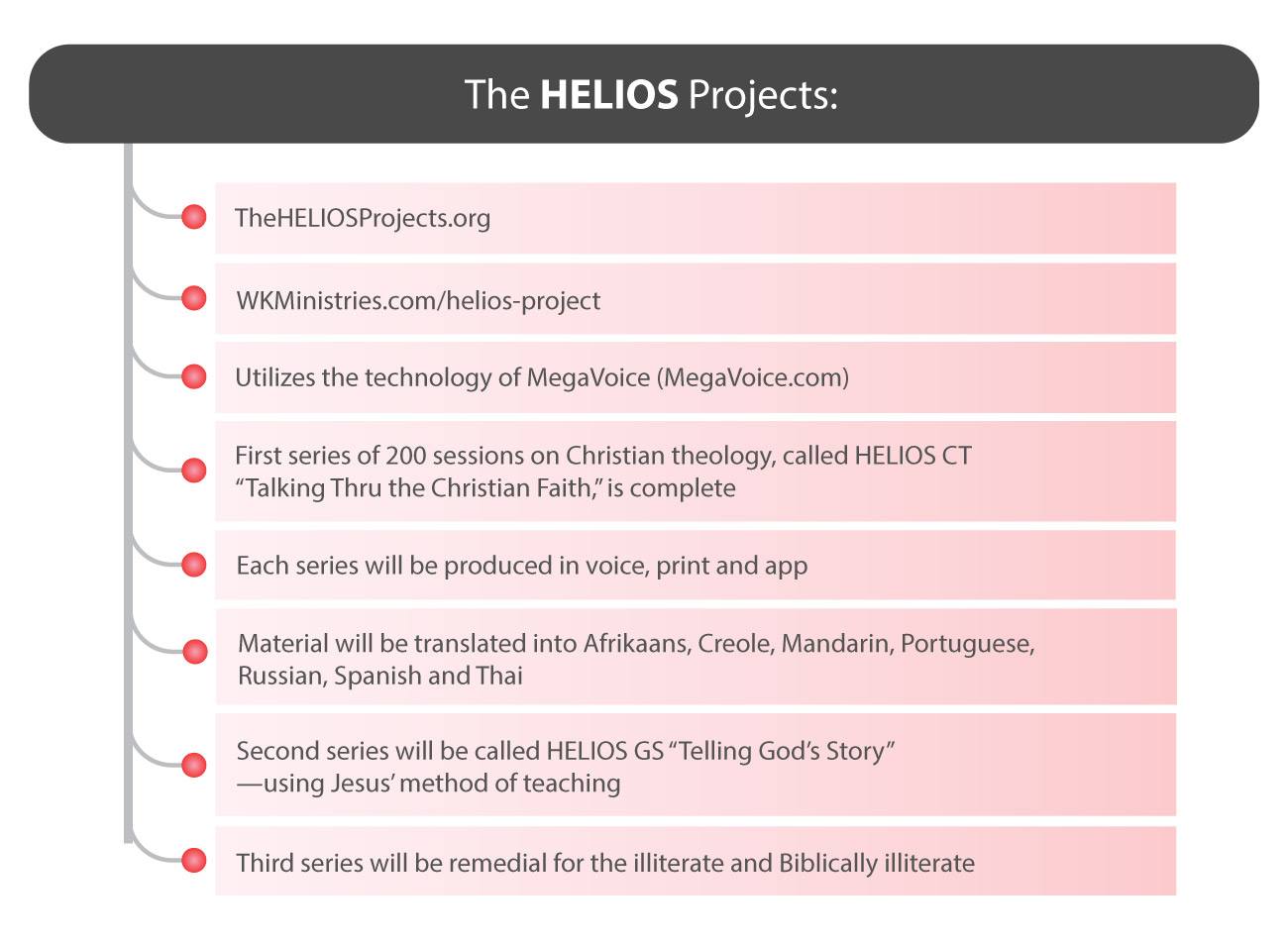 Kroll’s intent focus on Biblical literacy ties right into preparations for a year of celebrating the 500th anniversary of the Reformation. And he is a great one to ask about that topic from the dispensational perspective.

“I have traveled to Reformation sites for almost 50 years,” he said. “I have been to all of these Reformation sites many times. I used to take students there. Going to the Wartburg Castle, or going to Geneva—that’s living church history. It gives me a greater interest in the history of the church. Travel always teaches you something. You can read about it in a book, but I can see it in my mind because I have seen it at some point or other in my travels.”

In 1970, Kroll spent his final year of seminary studying at the University of Strasbourg in France.

“That was one of the Reformation cities,” Kroll explained. “Martin Bucer was a student of Calvin and he decided to go to France because Calvin was already in Switzerland. That is where he perpetuated the Reformation in France.”

“I have a wide area of interest. Bringing history and travel and archeology and all of these things together is very normal to me,” he said.

Kroll hosted two videos about the Reformation that were produced by Back to the Bible: After the Darkness . . . Light and Faith of Our Fathers: Tracing Our British Roots.

So is there a tie—historically or theologically—between the Reformation and dispensationalism?

Out of the Reformation came this primary need to read and believe the Bible. That led both to Reformed theology and to dispensationalism. I would think both camps would claim that they are using the Word as the basis for their systems. A dispensationalist can be Arminian, or can be Calvinist. But in Reformed theology the system is so closed that, in my mind, that does not lead to Biblical truth being brought to bear on the system.” 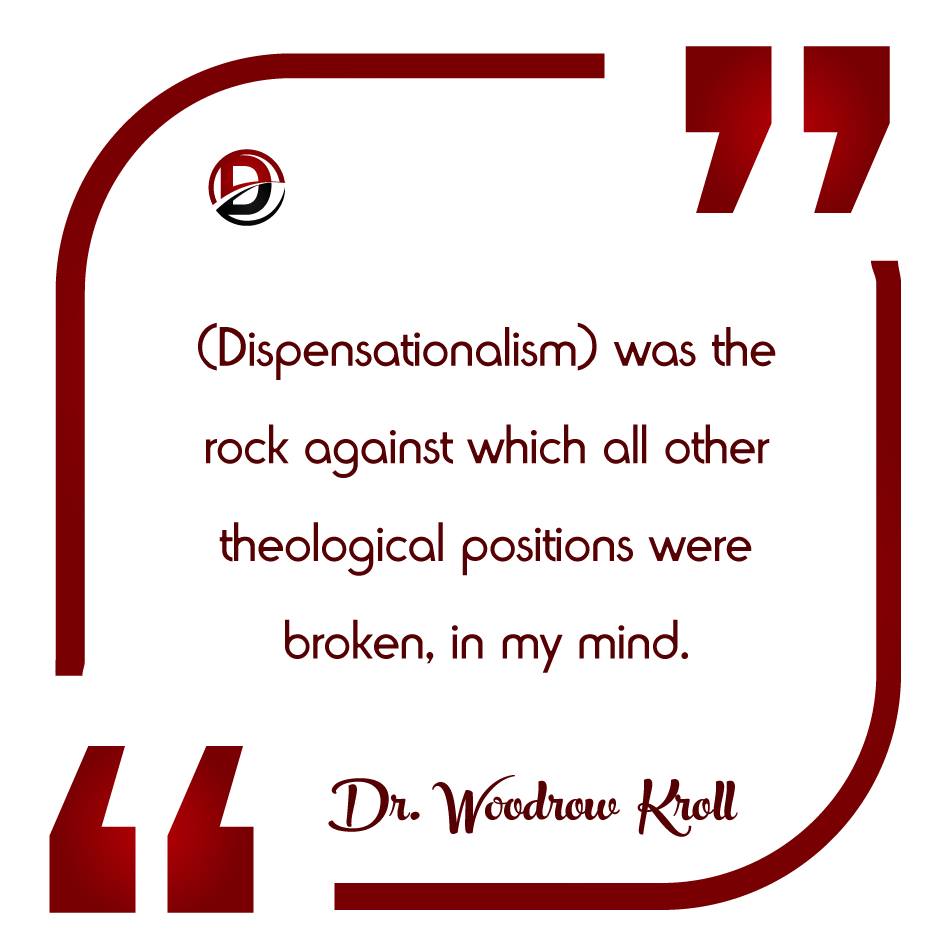 “Clearly what Luther was doing in looking at justification differently than the church was teaching was showing that God was justifying people differently in the New Testament than He was in the Old Testament. As a result of that, the Reformation unfolded based on the distinction between law and grace.”

Interestingly, from that beginning, Kroll went to a dispensational Bible college, but his seminary training was, for the most part, based in Reformed theology.

He stated in that regard: “My advice is, do not fear placing yourself in an atmosphere that is not what you are used to. But the only way to sustain yourself is to find yourself in a good church that teaches the Word—and to go there all the time. You must find a good Bible teaching church and be faithful to that, so you have something against which to judge everything that you are going to hear in the classroom.”

“I always compared what I believed to what I was being taught,” Kroll said. “The deciding factor for me was always common sense. The whole dispensational system always made more sense to me. There was never a time when I was in the throes of trying to decide whether to throw over dispensationalism. It was the rock against which all other theological positions were broken, in my mind.”

“I am a dispensationalist—not because I do not know the other positions or appreciate the other positions—I do. I just think that understanding the Bible as a progressive work of God in which He is dealing with people in a different way makes a little more sense. Dispensationalism seems to be more true, to me, to the way the Bible unfolds itself.”