Editor’s Note: Are you tempted to think that dispensationalists are a dying breed? That this dispensational theology that we love and treasure is destined for the doctrinal dustbin? Well, not if Dr. Ron Bigalke has anything to say about it—or if others are encouraged to follow his example. I am not sure how he has packed all that he has accomplished to date into his young life, but I am glad that he is on our side. It is a joy to call him my friend, and a privilege to list him as a contributing author for Dispensational Publishing House. He is devoted to faithfully advancing the cause of Christ and the tenets of dispensational theology.

Are you looking for someone who is actively promoting dispensational theology at the cutting edge of modern society? Meet Ron Bigalke. He is involved in doing so through every means possible—and he does it with a combination of academic credibility and passionate energy that ought to serve as an inspiration.

Bigalke is an author, editor, missionary, pastor, professor and researcher—and performs each of these tasks at the highest levels.

“First and foremost is Capitol Commission,” said Bigalke, the Georgia state minister for this organization which focuses on reaching those involved in state government with the gospel. “The priority of my ministry is serving the Georgia elected officials.”

“During session, the first few months of the year, it is non-stop,” he said. “I am not there to lobby. We are there solely for the soul of the leader. We distribute 500 printed Bible studies weekly in each of the sessions, in addition to several live Bible studies. That kind of constant pastoral care and counsel is the focus. It is very intense for everybody who is part of the legislative community.”

As part of his ministry, Bigalke travels to all 180 Georgia House districts and 56 state Senate districts on a rotating basis. He also works with the United States congressmen from the state—three of which were formerly part of his Capitol Commission Bible studies.

“So many invest in the elections, but if you make a disciple of Jesus Christ, no matter where they are in life, they are going to continue to be disciples.”

“We are not there to influence the legislation,” Bigalke stated. “We are there for the soul of the leader. We get bad legislation from someone who is not following the principles of Scripture. The church has been so angry for the last several decades that government is not following the principles of Scripture. But how can they do that when they do not know the Author?”

Bigalke said that legislators call him frequently to ask him what God would have them to do—knowing that they can trust him and the ministry that he represents. 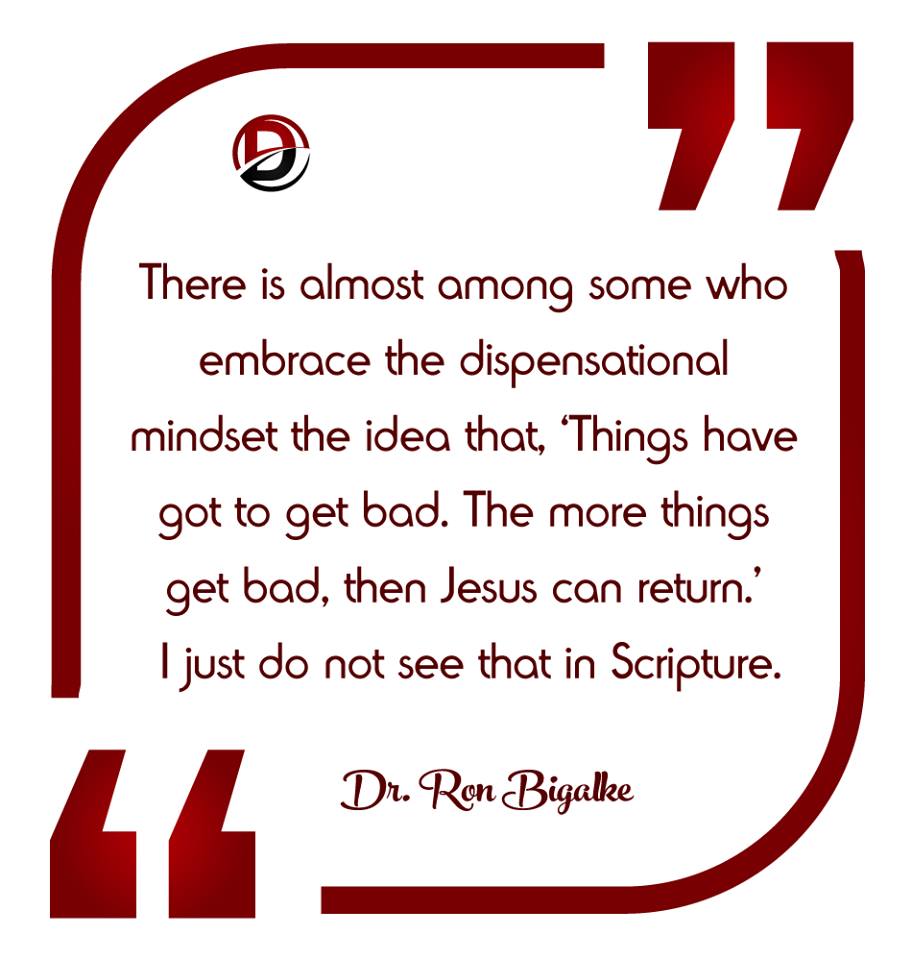 “You cannot truly disciple a nation unless you disciple its leaders,” he said. “The majority of the cities that Paul visited in the book of Acts were capital cities. His first convert was Sergius Paulus, a governor. Until that time, he was known as Saul. Most commentators agree that the change of his name was related to his first recorded convert—who was directly in line with what God said he would do (“. . . bear My name before . . . kings”

“If there is any hope for our nation, it is going to be by Christians being obedient to 1 Timothy 2:1-7,” he said.

Working as a missionary to elected officials is certainly a unique type of ministry—especially for a dispensationalist such as Bigalke. And, as you might expect, he has a unique perspective on that work. 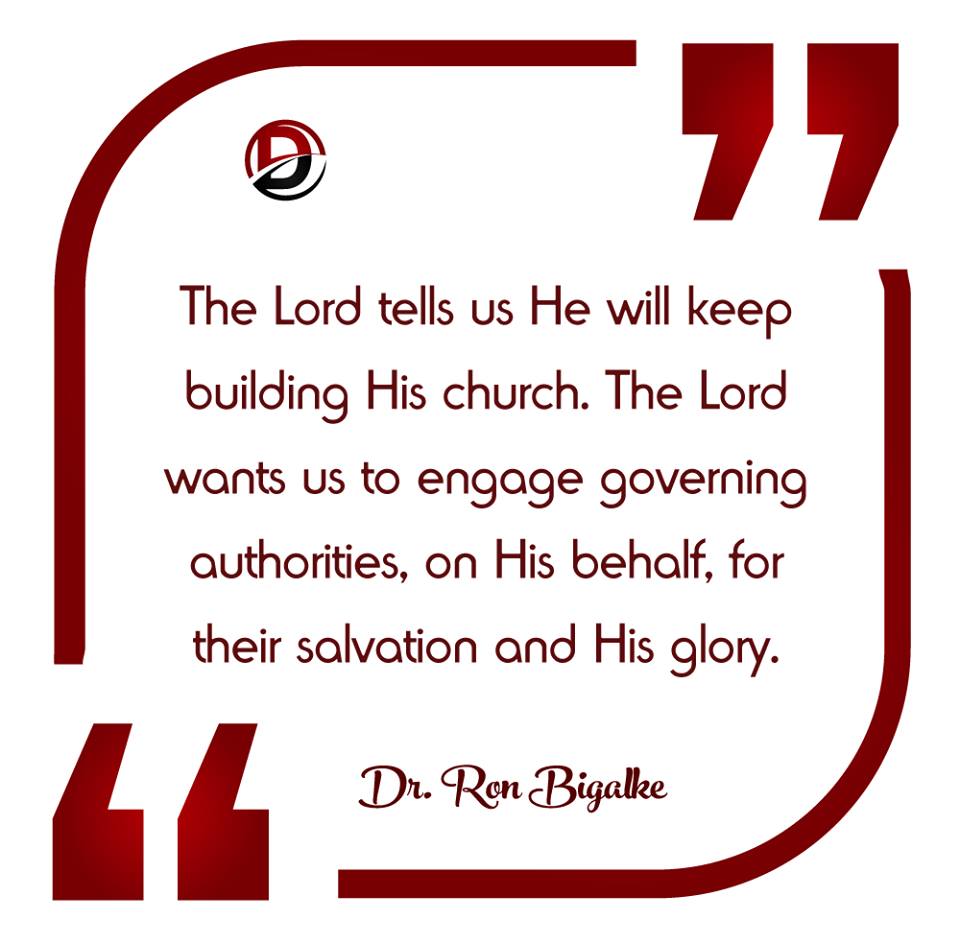 Bigalke stated: “There is almost among some who embrace the dispensational mindset the idea that, ‘Things have got to get bad. The more things get bad, then Jesus can return.’ I just do not see that in Scripture. The Lord tells us He will keep building His church. The Lord wants us to engage governing authorities, on His behalf, for their salvation and His glory. Jesus’ return for His church is imminent. Would it not it be more glorifying to our God that, when He removes His church, it is a glorious body that is exalting our Lord and Savior? I think too many who use dispensational language, or that are premillennial, fluctuate between futurism and historicism. They look at future events and try to impose them on the present time.”

“I labor diligently,” said Bigalke. “I want to do all that I can to express the Christian worldview. That is why I stay so busy.”

And busy he is.

You see, so far we have only covered one of his several responsibilities. Bigalke and his wife Kristin (who holds a doctorate of pharmacy degree) also serve under Biblical Ministries Worldwide, through which they are planting Coastal Bible Fellowship in Rincon, Ga.

“The two really go together,” he said of Biblical Ministries Worldwide and Capitol Commission, explaining that his role at the church gives him the freedom that he needs to serve in the Capitol. 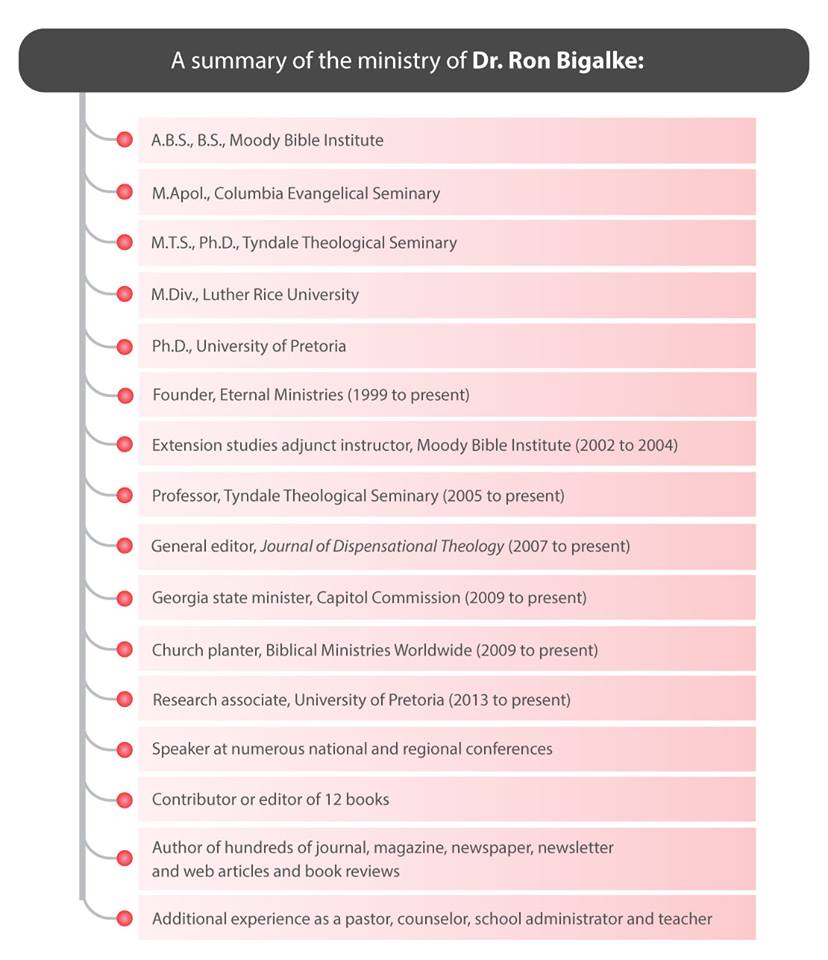 Bigalke does not promote dispensationalism out of theological naiveté. The University of Pretoria, where he received his second doctorate of philosophy, is notably liberal, and he certainly interacts with people holding a variety of views in his role with Capitol Commission. Further, Bigalke’s mentor when he studied apologetics at Columbia Evangelical Seminary was Dr. James White—a noted proponent of Reformed theology. And if all that were not enough, Kristin Bigalke grew up attending Coral Ridge Presbyterian Church and Westminster Academy in Fort Lauderdale, Fla., under the late Dr. D. James Kennedy.

Whether in academia or in his writing ministry, Bigalke is not afraid of mixing it up with theological scholars of every stripe.

“At the University of Pretoria, I had to prove why it is even valid for me to approach the Bible as inspired,” said Bigalke. As a graduate, he now writes for the university and does research for its New Testament, Missions and Ethics Project.

“I have tremendous freedom now,” Bigalke said. “I am invited to come and lecture any time that I would like. I am able to do peer reviews for journals—which is wonderful because the dispensational worldview is not represented. I am able to identify that deficiency.”

Bigalke has also written dozens of scholarly encyclopedia and handbook articles. For instance, for the Encyclopedia of Christianity in the United States (Lanham, MD: Rowman & Littlefield, forthcoming November 2016), he wrote more than 40 articles and serves as associate editor. 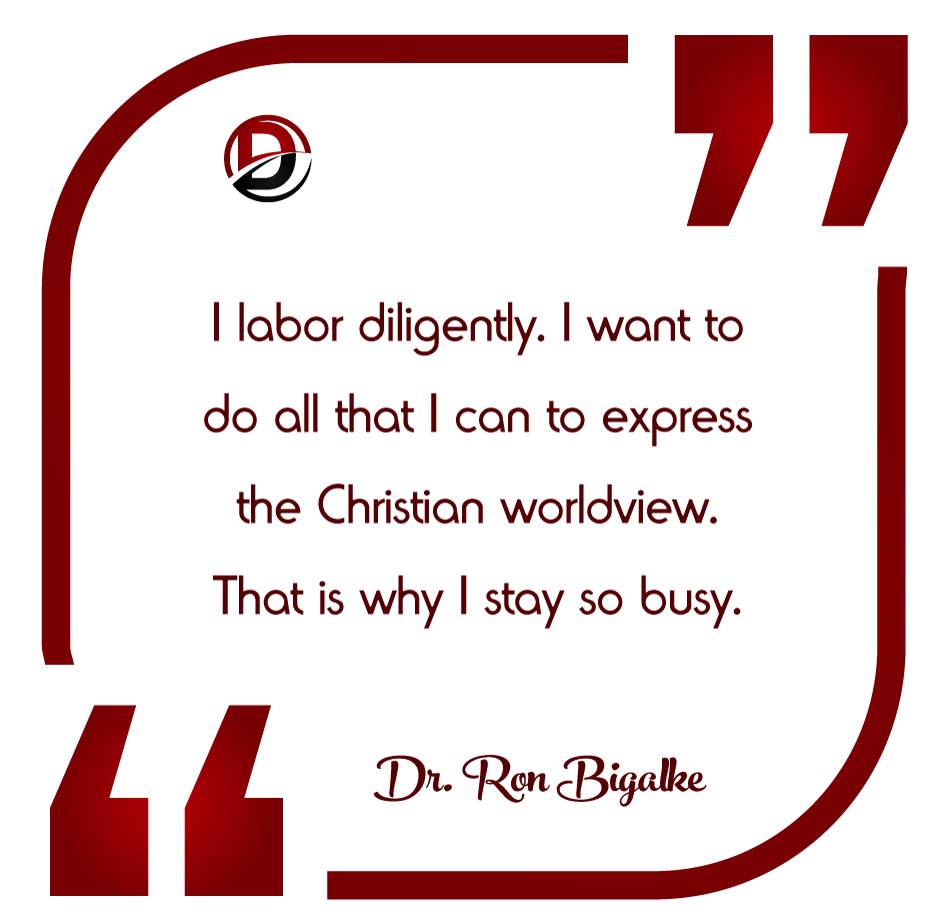 “The majority of the articles that I wrote were dealing with dispensational issues,” he said.

Bigalke did not become a believer until 1995, but began Eternal Ministries by 1999.

“I was so happy to have the truth, because I had for so long searched through all the garbage pails of the world,” he said. “I could not study the Bible enough. Very quickly, even though I was a young Christian, I had people coming to me, asking questions about the Bible. The more I would explain passages and doctrines, I could see that people were struggling to remember everything.”

Others encouraged him to put his material into print, which led him to begin Eternal Ministries, through which he could produce resources to benefit the church.

Bigalke continues to serve as the editor of the Journal of Dispensational Theology. “We are always getting submissions, so I am always interacting with potential authors,” he stated.

He also writes a monthly column for Midnight Call magazine and serves on its board of directors.

“I love Midnight Call because they are dispensational, and they really work diligently to avoid any kind of sensationalism,” said Bigalke. “It is just a wonderful ministry.” 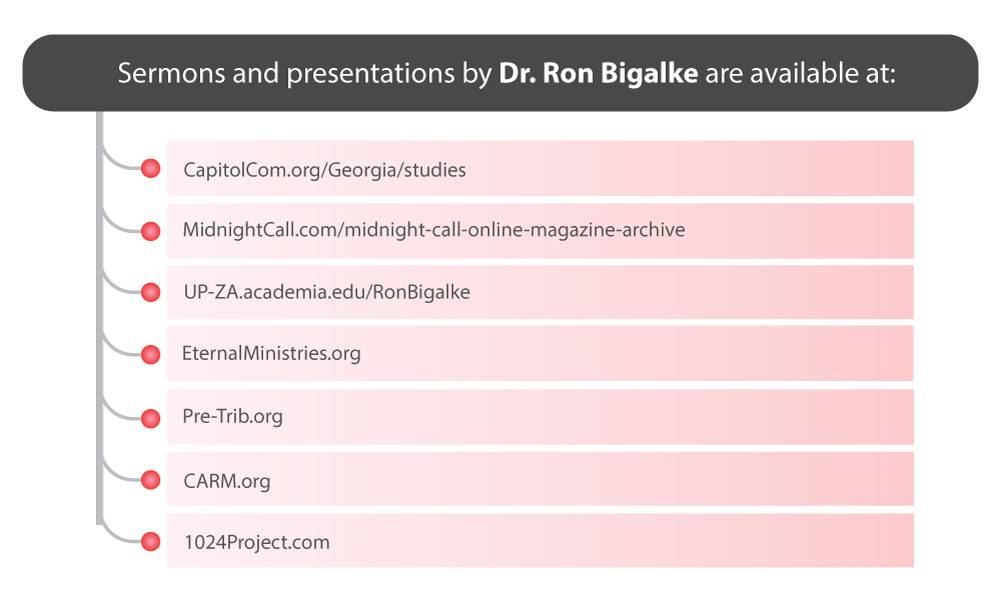