Editor’s Note: September is back-to-school month, so I thought it would be a great time to interview someone who could offer a unique perspective on the future of higher theological education. And I certainly found the right person to talk about it! I have watched the ministry of Dr. Christopher Cone from afar for quite a while. He has achieved an incredible amount in terms of both education and ministry—yet he has earned some of his impressive credentials in non-traditional fashion. Cone is also beginning his first semester as president of the newly renamed Calvary University in Kansas City. He provided some fascinating insights into what could very well be turbulent times ahead for Christian colleges, universities and seminaries.

That summation gives us a keen perception into the life of Dr. Christopher Cone.

Cone has prepared himself to have tremendous credibility in speaking about the Bible, theology, philosophy, education and, in particular, dispensationalism—and he has a whole lot to say about all of it that is worth hearing. 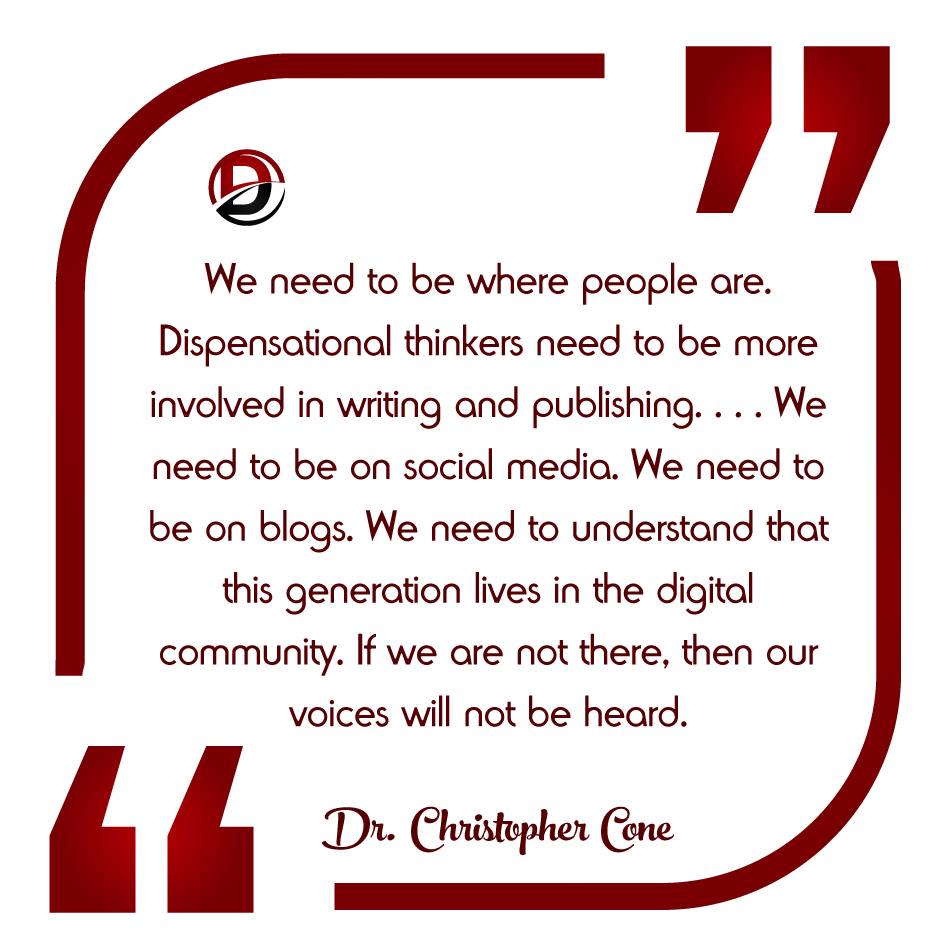 “With the Millennial Generation, you are seeing an attraction to Reformed theology, in large part because many of the Reformed thinkers are answering the questions that young people are asking. Dispensationalism has, in some circles, become stereotypical, in that our focus seems to be purely on eschatology. But the Biblical worldview, and a dispensational worldview, ought to address every area of life. The charge to this generation of dispensational thinkers is that we answer the questions people are asking—using the literal, grammatical, historical principles of interpretation.”

Cone himself is—if nothing else—academically authentic. He said that his own training unfolded in three distinct phases—both logically and chronologically—with each phase ending in a doctorate.

“First of all, I wanted to focus on the Bible and developing exegetical skills,” he said, noting that meant learning Biblical languages and the content of the books of Scripture.

“In the second segment, which culminated in a Ph.D. in theology, the focus was on taking the exegetical work and beginning to flesh out a theology–being totally committed to the Word of God, regardless of where that took me theologically,” Cone stated.

He said: “That process confirmed dispensationalism. I became more convinced than ever that the dispensational view was a Biblical one. Through that process, I also discovered that there are many things that we have added as dispensationalists, and fallen into some traps. I have tried to focus on removing some of the clutter and just focusing on what the Bible teaches.”

Cone said regarding the third and final leg of his educational journey, which culminated in earning a Ph.D. in philosophy from the University of North Texas, “The idea there was to the put the Biblical conclusions to the test under the scrutiny of secular thinkers. I became more convinced than ever that the Biblical worldview is truth, it is sound, and it holds up under any kind of scrutiny. I discovered that many of the disagreements that we have are actually rooted in philosophical issues, and we may not be aware of some that philosophical baggage.”

Cone said that he also “felt the need to focus on the Scriptures and get the doctoral qualification so I could function in higher education.” 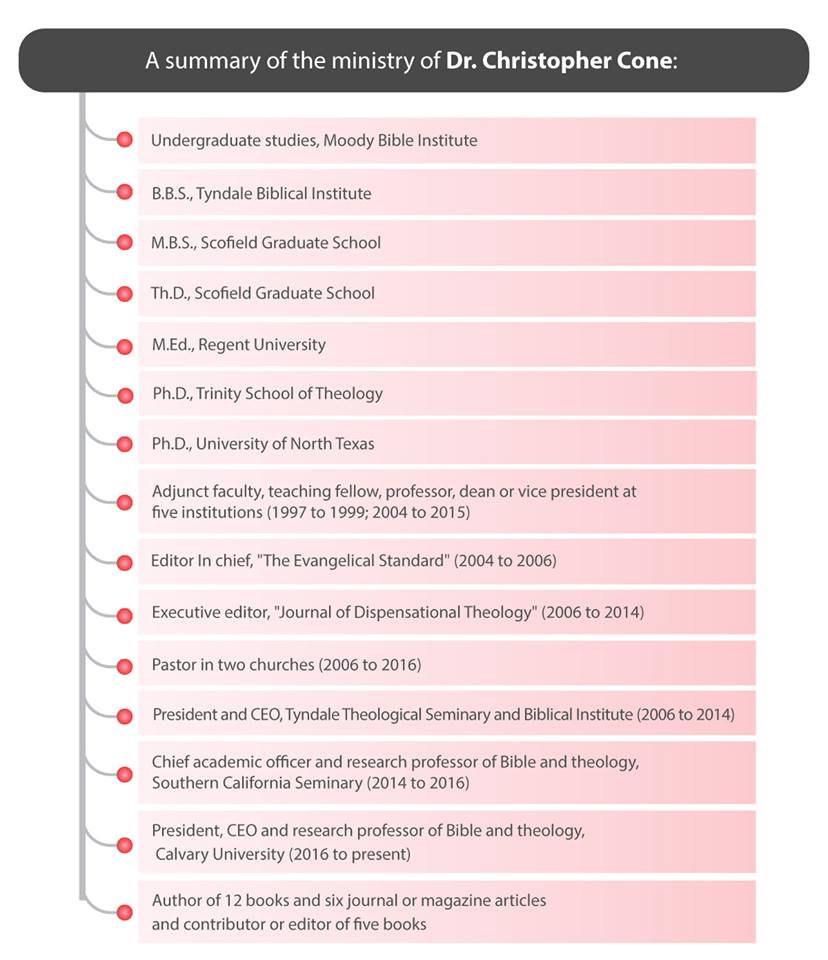 So how would he advise a young person who is just beginning to pursue a theological education? He stated as follows:

Cone spent eight years as president of Tyndale Theological Seminary and Biblical Institute—a school that has taken a controversial stand against becoming accredited—from which he also received his first degree. 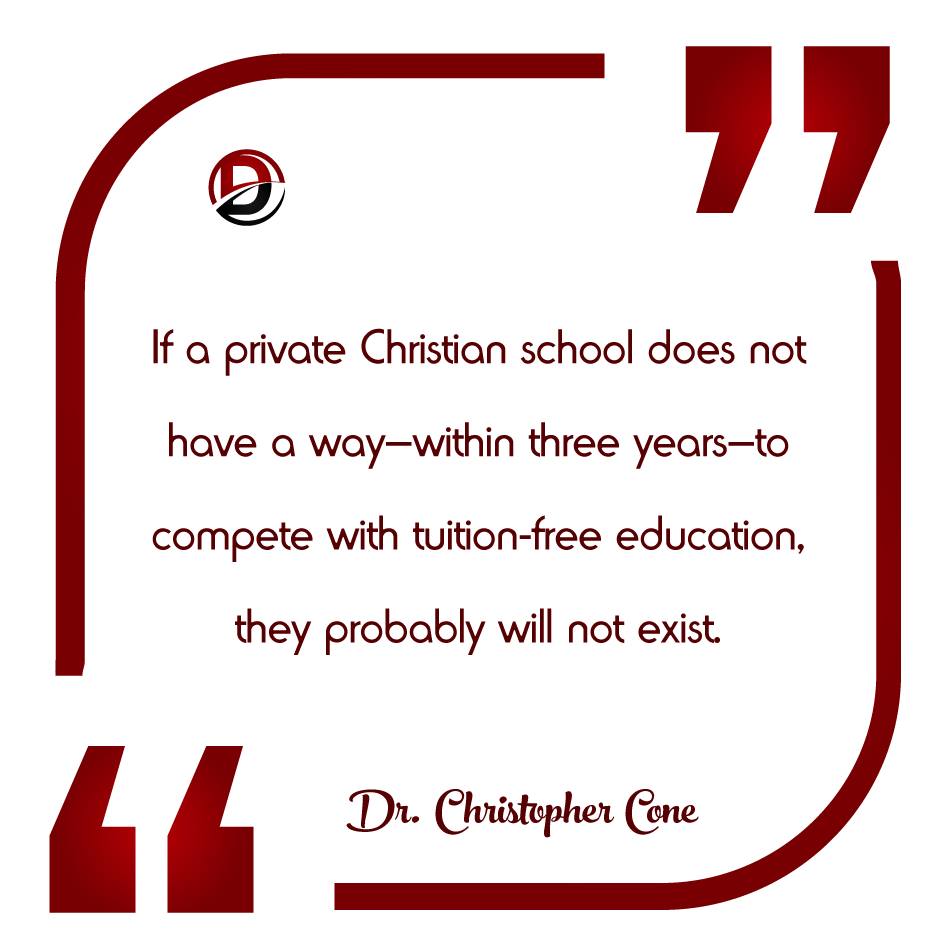 “Tyndale was just outstanding in their Biblical content,” said Cone. ““The programs at Tyndale were very language-intensive. Even today, Tyndale is, in my opinion, the absolute finest non-accredited Biblical training institution on the planet, and is currently being led very well.”

“I saw the incredible value of a school being mobile and agile and fleet,” he said of his time of service there. “Tyndale was able to minister at the same quality as the accredited schools, but in ways and formats that an accredited school could not really touch.”

“At Calvary, we are able to give people the Biblical training and the tentmaking skills, but there is a significant cost to that,” he said.

Cone does not see a bright future ahead for Christian higher education. Surprisingly, he does not believe that the attack will be a direct hit based on the LGBT agenda.

“There is increasing pressure,” he said. “Schools that have accreditation should make the most of the opportunity, because the window is closing. Right now, we have the ability to have exemptions and function in accord with doctrinal statements. But that is becoming more difficult.”

“The Democratic Party model is the European model. They are seeking socialized higher education,” he said, noting that presidential candidate Hillary Clinton is promoting tuition-free college education through public institutions.

“I would anticipate that if there is a Democrat in the White House, we might have three or four years. The window will close much more rapidly.”

Cone believes that this financing issue will become the key to the struggle that is about to intensify.

“Private schools will not have access to these subsidies,” he said. “They will not be able to compete with tuition-free education. The handwriting is on the wall. Any private school that is not developing an in-house financial aid program is going to be in trouble.” 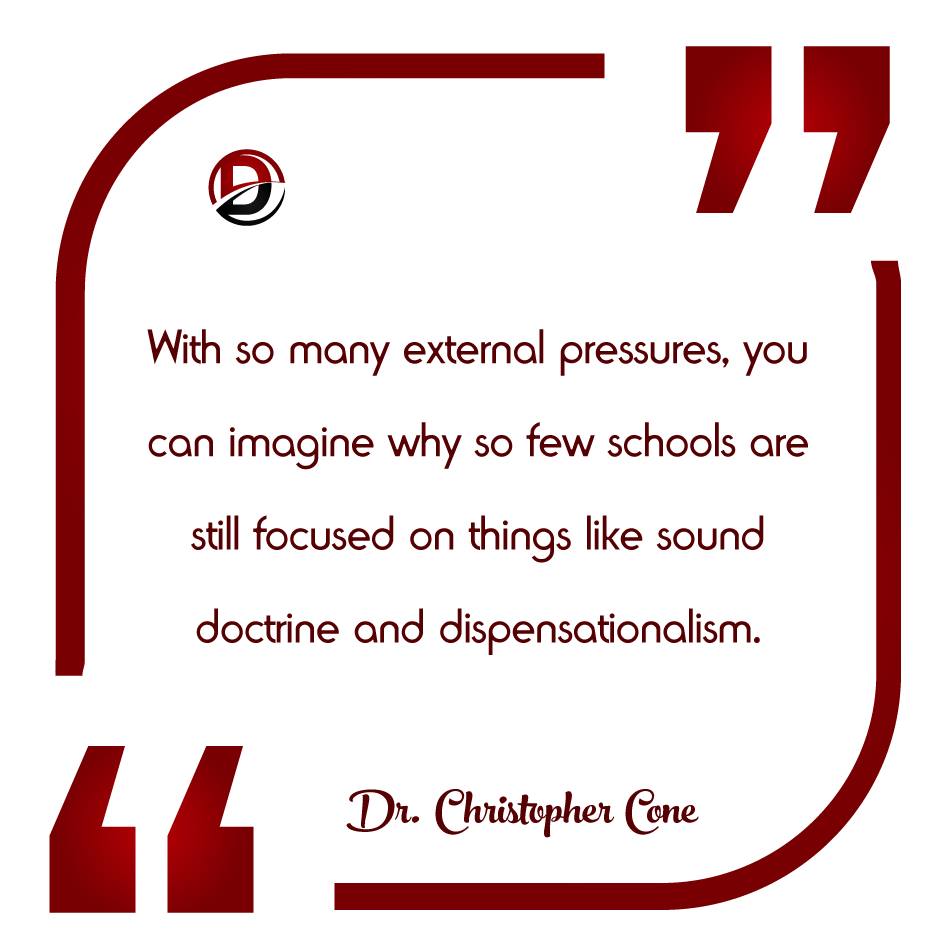 “Calvary has a study-work program that has been several years in the making,” Cone noted. “It is essentially designed to allow students to work as they study, develop the skills they need and decrease overall cost. We also work with community partners as we develop private funding to help support that. Calvary is probably much further down the road than most private schools. If a private Christian school does not have a way—within three years—to compete with tuition-free education, they probably will not exist. This is a financial issue, and it will be signed into law and no one will pay attention, but overnight private schools will be in some real trouble.”

Cone stated, “One advantage that non-accredited schools have is that they are insulated from this, because typically their costs are much lower.”

“With so many external pressures, you can imagine why so few schools are still focused on things like sound doctrine and dispensationalism,” he added.

“I am not concerned about being sued, I am concerned about doing what is right,” Cone said. “There are obviously legal strategies we need to consider, but I think sometimes we can lose sight of the goal and the bigger picture.”

“If you do not have an accredited terminal degree, then you will be limited if your focus is higher education,” said Cone. “Accreditation is a form of accountability, and it can be healthy. The two challenges are who you are accountable to, and the cost of it.”

Finally, Cone sees no dichotomy between theological education and ministry—but rather a seamless transition between them.

“As long as I have been in higher education, I have been in pastoral ministry as well, until recently,” he said. “It has been valuable to be able to see from both angles—the higher education angle and the practical ministry angle. I think it is very important because you cannot have a good ministry unless you are church-focused. And if your church ministry is not based in sound exegesis, then your ministry is going to be less than it should be.”

“The history of dispensationalism is more church-focused than in the academy. Moving forward, a balance is healthy. We need to stay church-focused. But we also need to have an intellectually rigorous approach to the Bible and theology.”

Cone is settling in comfortably in his new role as president and chief executive officer at Calvary University.

“There is a lot of progress. There are a lot of good people here. We are expecting to see some growth. I am very thankful to be at Calvary. It has been a historically dispensational school and will continue to be. Our commitment at Calvary is to make sure that every class is undergirded with the Word of God and the Biblical worldview.”