Editor’s Note: Dr. Charles Dyer has a very unique combination of experience in Christian ministry, having served at the highest levels of Christian education as both an administrator and an educator; having been involved in Christian publishing as both an author and an editor; and having additional experience as a pastor, radio host and tour guide. Above all, he is a scholar and a fine Christian gentleman. He is also the author of the forthcoming volume from Dispensational Publishing House, Future Babylon: The Biblical Arguments for the Rebuilding of Babylon. We are glad to draw on Dr. Dyer’s expertise in this article, and we look forward to providing special opportunities for you to interact with him when we launch the release of that book.

“I went to a small Bible college, but I had several professors who really pointed me in the right direction,” stated Charles Dyer as he looked back on his preparation for a lifetime of significant ministry opportunities. “They had a Biblical approach. They taught me that God intended the Bible to communicate. You take it at face value. If you do that you are going to end up a classic dispensationalist.”

It was in Bible college that Dyer wrote his first paper on Babylon—a haunting subject that captivates his attention to this day, as will be discussed much further around the upcoming release of his new book for Dispensational Publishing House, called Future Babylon. 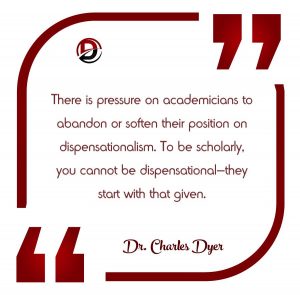 Dyer attended Dallas Theological Seminary, where his favorite professors were “Howard Hendricks, Roy Zuck and Stanley Toussaint. I became a classic dispensationalist by being a Biblicist. Hendricks got me thinking Biblically, and Zuck and Toussaint were so strong Biblically. Those three were probably the biggest influence on me.”

“I was there at the golden age of those guys,” Dyer said.

After finishing his master of theology program, Dyer stayed on and finished the doctor of philosophy program.

“I loved it,” he said. “I was in Bible exposition. You had to do arguments on each book of the Bible—all 66 books.”

Dyer had the unique opportunity to work at the school, beginning in his third year of seminary. He served in numerous administrative and faculty positions, and also had opportunities to become involved in writing and editing. There were many school years where he was mixing more than one of those roles together with continued study. He was first published in 1981 at 29 years of age, and had the opportunity to contribute expositions of Jeremiah, Lamentations and Ezekiel to The Bible Knowledge Commentary: Old Testament (Victor, 1985).

“You learn how to use your time wisely,” Dyer said.

When Zuck was editor of the highly-regarded theological journal Bibliotheca Sacra, Dyer added another skill to his repertoire.

“He made me the assistant editor. I learned writing and editing under Roy Zuck. He was

the master. He would show me how to make things fit. It was just a fascinating course on writing and editing, with the hands-on Roy Zuck.”

“I enjoyed them all,” he said of the various jobs. “I found out I enjoyed both teaching and administration. I got into writing and found out that was a great way to influence others that may never come to your classroom.”

Dyer left Dallas Seminary in 1985 for three years to go back and assist his college alma mater, but returned to Dallas for another 12 years in 1988. In 2000, he and his wife Kathy headed north to Chicago to work for another historic, dispensational school—Moody Bible Institute. He served there for 10 years as provost and senior vice president of education, and continues to have a relationship with MBI even though he now lives in Arizona.

“It was the right time to make a move,” he said of his call to Moody. “(MBI President) Joe Stowell had approached us on it in 2000.” 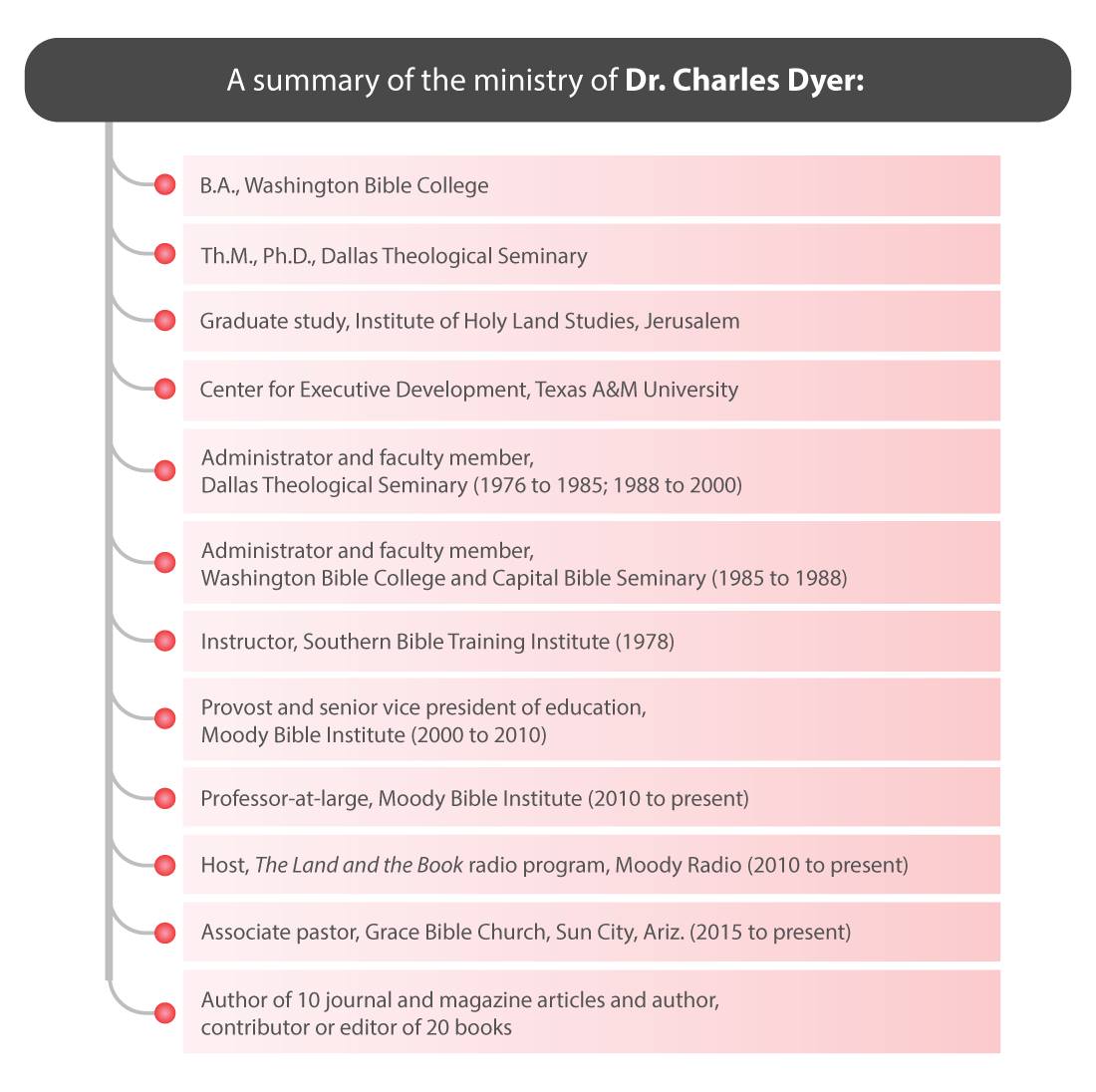 Dyer has had a bird’s-eye view of higher theological education for more than 40 years, and is well-qualified to speak on the trends that are affecting dispensationalism within academia.

“There is pressure on academicians to abandon or soften their position on dispensationalism,” Dyer said. “To be scholarly, you cannot be dispensational—they start with that given. Academic pride comes in. The text has one meaning, but academicians are always looking for the new. You want to be respected by your peers—the 500 people in your discipline who are at the top of the heap. If you say you are a classic dispensationalist, they will say, ‘Well, you are obviously not a scholar.’”

Dyer is convinced that we have reason to maintain our Biblical, dispensational viewpoint.

“The pressure to abandon classical dispensationalism is not because it does not have scholarly roots and depth behind it, but it is because of the psychological pressure that is put on individuals who want to be accepted by their peers,” he said.

Dyer considers classical, traditional, normative and revised dispensationalism to all be basically the same thing under different names.

“We may approach texts differently—we may approach words differently—but they are all in the same camp, and I consider myself in that camp,” he said. “I prefer not to label and sub-divide that camp. There are always going to be differences with individuals. We do not see everything the same way. But we agree on the essentials.”

“There is a difficulty finding normative or classical dispensational faculty, because the students coming out of graduate schools have not had faculty who identified themselves as a positive role model in normative dispensationalism,” Dyer stated.

The downturn of dispensationalism in higher theological education ultimately trickles down to local churches. 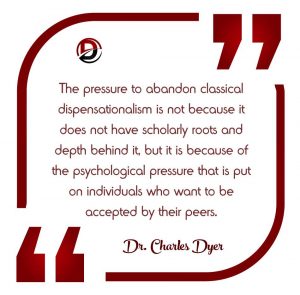 “According to 2 Timothy 3, we know what it is going to be like in the last days,” Dyer stated. “Paul was describing what he saw that final state being. The good news is we do not know if we are in those last days. God could send a revival to our country. But absent a revival, we could be heading into that final period heading up to Christ’s return.”

Dyer said that any revival would be marked by prayer and by preaching in the spirit of 2 Timothy 4:2—which ties right back into dispensationalism.

“To the extent people have gotten away from dispensationalism, we are actually seeing them neglect large parts of the Bible,” said Dyer. “The average graduate today does not know how to approach Isaiah or Revelation. You are seeing a lot more topical preaching and a lot less expository preaching.”

“To the extent that they are no longer preaching the word, they are trying to come up with messages that are tickling ears. It is sad to see the state of preaching in many local churches today.”

Now, as he approaches what some might consider retirement age, Dyer has actually taken on a new challenge, as he is serving in a pastoral role for the first time in his career—at Grace Bible Church in Sun City, Ariz., where he preaches on Sunday evenings. He also continues to host The Land and the Book for Moody Radio. The program airs weekly on roughly 400 radio stations. Dyer also stays involved in writing and leading tours to Israel.

But would you expect anything less from a man who learned early on how to balance seminary classes with administration, teaching, writing and editing? 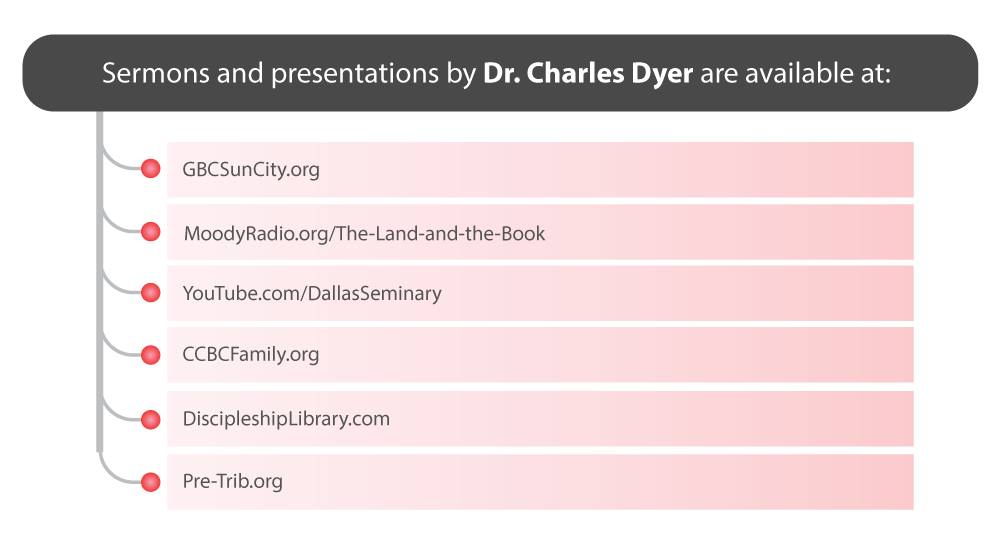