The Dispensation of Government (Part 1)

The Dispensation of Government (Part 1)

We are continuing our study of the dispensations, which unfold for us the plan of God as revealed in Scripture.

Remember that it is the giving of a fundamentally new revelation from God, recorded in His Word, that changes mankind’s responsibility before God and begins a new dispensation.

In the two previous installments we have seen that the second dispensation, of conscience, begins in Genesis 3 and runs through Genesis 8:14. 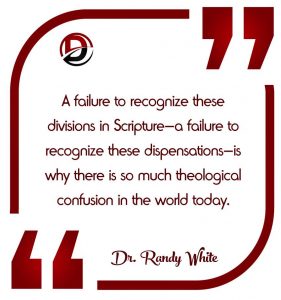 regarding eternal life during the dispensation of conscience. At this time, salvation was thought of as being the time when the Messiah would come to save, redeem and restore all of creation in fulfillment of Genesis 3:15. The faithful people of this time probably hoped that they would still be alive when He arrived.

The dispensation of government is named for the fact that God gave fundamentally new revelation during this time which required mankind to develop the rudimentary elements of government.

The first instructions given during this third dispensation are found in Genesis 8:15-17, which open this age of government:

The latter part of this command is not fundamentally new, and would be repeated again (cf. Gen. 1:28; 9:1, 7). Nevertheless, it is emphasized as one of the main commands for this dispensation.

Another major new revelation given during this age comes to us in Genesis 8:21:

I will not again curse the ground any more for man’s sake; for the imagination of man’s heart is evil from his youth.

This passage gives us great insight into the nature of man and the doctrine of salvation. At some point, which we often call the age of accountability, a child’s heart is shown to be openly inclined toward evil. At that point, every person must wrestle with the same choice that Cain was given when he heard these words from God:

If you do well, will not your countenance be lifted up? And if you do not do well, sin is crouching at the door; and its desire is for you, but you must master it” (Gen. 4:7, NASB).

Continuing with more new revelation, we next consider the marvelous promise that is given in Genesis 8:22:

While the earth remaineth, seedtime and harvest, and cold and heat, and summer and winter, and day and night shall not cease.

This verse gives us the assurance that the earth will continue, under God, to operate in accord with His purposes. How wonderful it is to know that there is no chance that the sun will not come up tomorrow, or that there will never fail to be another harvest! There are many things that we can worry about, but the malfunctioning of the earth is not one of them.

Genesis 9:2 tells us how the animals would live alongside of man in this age following the flood:

In the future kingdom, the animosity between man and beast will all be erased (cf. Isa. 11:6-9). In the meantime, the fact of animals fearing man is a product of the change in man’s diet and the accompanying change in behavior by which people would approach animals as food, as described in Genesis 9:3-5.

The most important revelation that was given during this age of government comes in Genesis 9:6-7, which discusses the possibility of someone following Cain and killing another person:

Whoso sheddeth man’s blood, by man shall his blood be shed: for in the image of God made he man. And you, be ye fruitful, and multiply; bring forth abundantly in the earth, and multiply therein.

The giving of this new revelation is the reason that we call this the dispensation of government. The implementation of capital punishment would require that people would begin to assemble the essential elements of government in order to carry out such a sentence.

As mankind receives new revelation in each new dispensation, he realizes that such revelation is the only means by which human beings can know what “the Lord said in his heart” (Gen. 8:21). Apart from revelation—and the fact that His Word records it—we would know nothing of the heart of God. As the prophet Isaiah wrote,

For my thoughts are not your thoughts, neither are your ways my ways, saith the Lord.

The dispensation of government covered 226 years of time according to the dating system of Bishop Ussher. It goes on to include the Table of Nations in Genesis 10 and the account of the Tower of Babel in Genesis 11, ending with Genesis 11:32. We will conclude our study of this age of government in our next article.