The Dispensation of Conscience (Part 2)

The Dispensation of Conscience (Part 2)

After Adam and Eve sinned in Genesis 3, they were not immediately given any new laws by which to live their lives. How were they to know what to do to please God?

The answer is that they were to live on the basis of the conscience. They had to look at the world around them—knowing what they understood to be true about God—and determine on that basis what was right and what was wrong.

We are in the midst of a study of the dispensation of conscience—the second dispensation—which begins in Genesis 3 and runs through Genesis 8:14.

As we consider the principles that carry over from this dispensation even down to us today, we realize that, like Adam and Eve, all people still live with fear, shame and blame because of sin. We have never gotten over that.

It is only through a relationship with Jesus Christ that we can have a restored relationship with God. As we mature in that relationship, we are able to overcome elements of the fear, shame and blame that would otherwise overwhelm us. One mark of such maturity is that we are no longer seeking to cover up our sinful flaws by means of man-made inventions (cf. Gen. 3:7).

Another element from this dispensation that continues to be in force even until our present day is the promise of the ultimate crushing and defeat of Satan. Genesis 3:15 has been partially fulfilled, in that Christ’s heel has been bruised. Yet Satan continues to act as described in 1 Peter 5:8:

Be sober, be vigilant; because your adversary the devil, as a roaring lion, walketh about, seeking whom he may devour.

Has Satan’s head been crushed? No. The ultimate defeat of Satan is still in the future. The Messiah will accomplish this work completely when He returns to establish His kingdom upon the earth.

What has changed since the end of the dispensation of conscience and the giving of further revelation? Here are several things: 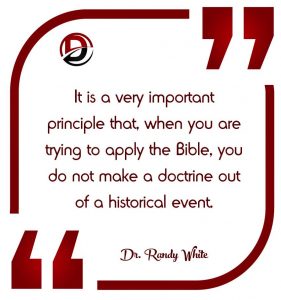 Lamech said to his wives,
“Adah and Zillah,
Listen to my voice,If you do well, will not your countenance be lifted up? And if you do not do well, sin is crouching at the door; and its desire is for you, but you must master it.”
You wives of Lamech,
Give heed to my speech,
For I have killed a man for wounding me;
And a boy for striking me;
If Cain is avenged sevenfold,
Then Lamech seventy-sevenfold” (NASB).

By him therefore let us offer the sacrifice of praise to God continually, that is, the fruit of our lips giving thanks to his name (Heb. 13:15).

Every man according as he purposeth in his heart, so let him give; not grudgingly, or of necessity: for God loveth a cheerful giver (2 Cor. 9:7).

It is important to note here that these sacrifices in the age of conscience were brought before the law was given. Sometimes people teach or imply that anything that we find occurring in Scripture before the law must transcend all the dispensations and be in force at all times. However, no one believes in offering animal sacrifices as they were offered before the law. It is a very important principle that, when you are trying to apply the Bible, you do not make a doctrine out of a historical event.

What do we learn from this dispensation that is in conflict with what the culture around us believes? In closing, here are three thoughts in this regard:

If you do well, will not your countenance be lifted up? And if you do not do well, sin is crouching at the door; and its desire is for you, but you must master it” (Gen. 4:7, NASB).

Cain was given a choice and an opportunity to turn and trust the Lord, which differs from the idea that we have no opportunity to believe on Him unless we are first regenerated.

If Genesis 3 had never happened, then mankind would still be in a state of innocence and a state of sufficiency. Many people believe that we are, indeed, whole and right with God. But this would disregard the entire fall of man.

We are no longer living in innocence. We need to be restored, and needed God to send a Redeemer to fix our problem.

Also, apart from understanding this dispensation of conscience, the world as we look at it today would leave us with a distorted understanding of origins. When we look at the earth today we see fossils—the result of death. But that is not how God originally created the earth.

No, this world has been cursed. It is not in the perfect condition in which God originally created it.

The events of this dispensation actually help us to make sense of the entire story of the Old Testament and of the Bible. A Messiah would come to be our Savior. Who would it be? That would finally be revealed in Jesus Christ. In the meantime, a wonderful history would unfold that would prepare us for such a glorious event.