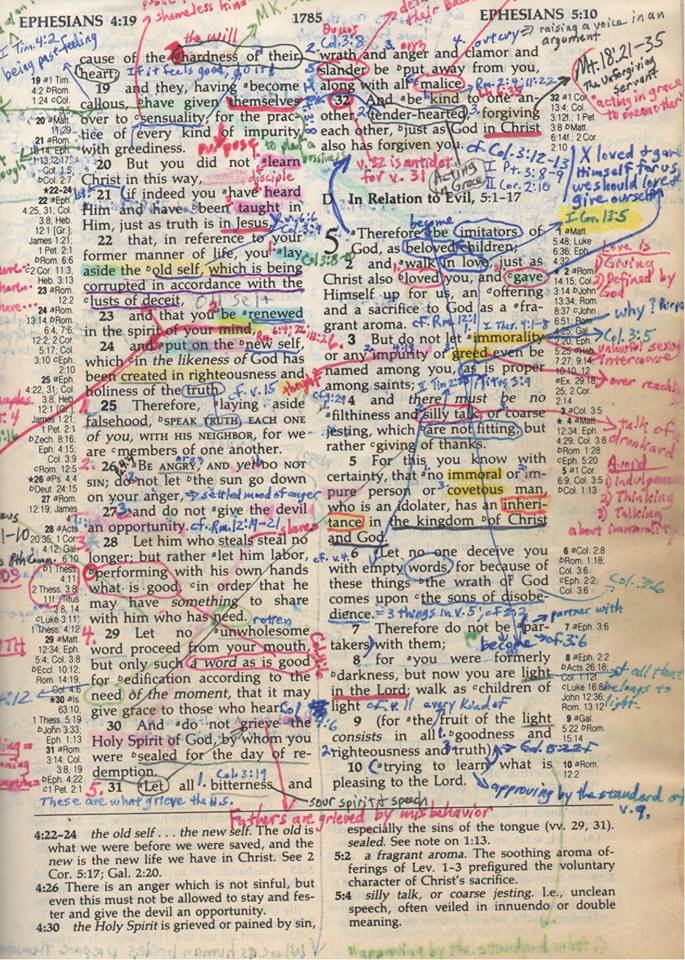 Editor’s Note: We continue to honor the life and legacy of Dr. Charles C. Ryrie. The Lord called Dr. Ryrie home to Heaven on Tuesday, Feb. 16, 2016. His influence will continue to be felt, however, through the lives of men that he discipled, including Dr. Thomas Ice, who offers his tribute below. In the photo below left, Dr. Ice presents Dr. Ryrie with the Pre-Trib Research Center’s “Jo 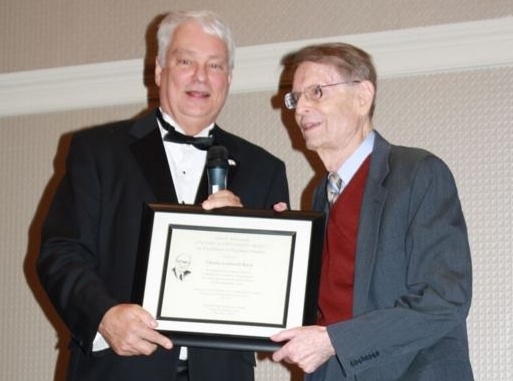 hn F. Walvoord Lifetime Achievement Award for Excellence in Prophetic Studies” at the 24th Annual Pre-Trib Study Group Conference, which was held in Irving, Texas, in December of 2015. In the photo at right, you can see an example of how Dr. Ice has made good use of his copy of the Ryrie Study Bible, which he also discusses below.

If you have missed the earlier tributes in this series, we encourage you to go back and read them. They are entitled, “An Incredible Legacy” and “The Brilliant Scholar.”

Today, we focus on Dr. Ryrie’s “Devotion for Christ.” Dr. Ron Bigalke points us toward this vital element of Dr. Ryrie’s life and character in his testimony, which is offered below.

Thank you for reading these tributes in memory of Dr. Charles C. Ryrie. 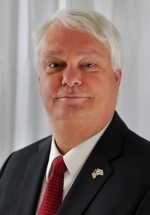 I am happy for Dr. Ryrie that he has entered into the presence of his Lord and Savior a few days ago. What an amazingly faithful steward of Christ he was. Almost 91 at his death, he served the Lord for about 86 years, since he trusted Christ as his Savior at age five. Dr. Ryrie was tested through the trials and tribulations of life and remained faithful. He leaves us a tremendous example of Biblical scholarship and personal friendship, which we would all do well to imitate. I once asked him about a specific Biblical issue, if he had changed his mind over time concerning this matter. He said, “How can I change since the Bible has not changed?”

The first real theology book I ever read as a young man was Dispensationalism Today. That book made such a great impact on me because I saw in it a clear, accurate and convincing case made for dispensationalism. It has so impacted me that I have not changed my basic views on these issues since the early 1970s, even though we have been bombarded with so many supposed “improvements” over the years.

I got my copy of the Ryrie Study Bible in October of 1978 and have used that copy of it ever since. I love it! I took it to a class I had with Dr. Ryrie and had him autograph it. I told him: “When I get to heaven, I’ll have God autograph the rest of it.” When I went to China a few years ago I learned that the Ryrie Study Bible and his Basic Theology were translated into Chinese and were widely used throughout China by the underground church. Dr. Ryrie was certainly a top-notch scholar but also someone that most common people could understand. Ryrie knew the entire Bible and every area of theology well.

Only four days before he died I called him on the phone. When I heard his weak voice I knew something seemed wrong. I asked him if anything was wrong and he said weakly, “I am just old.” Little did I know he would be gone so soon! Once when I had him speak at a church I pastored, he stood at the entrance and greeted people as they came into the auditorium. Upon introducing himself to one lady who was carrying her Ryrie Study Bible, she said, “I thought you were dead.” Dr. Ryrie got a good laugh from that. Well, he has now passed away but his legacy and influence continue on and will do so until the entire church is called to meet Christ in the air. Maranatha! 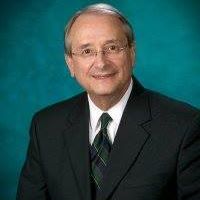 Though, barring the prior return of Christ, we knew that it would happen sooner or later, I was still unprepared for the death of Dr. Charles Ryrie.

He was a fine and careful theologian. A traditional dispensationalist, Dr. Ryrie had an unshakeable commitment to the historical-grammatical interpretation of Scripture.

Those of us who take the Bible seriously will sorely miss his insights and his articulate theological explanations. 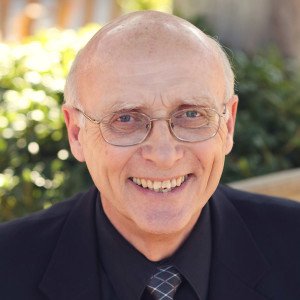 When I was in seminary (San Francisco Baptist Theological Seminary), Dr. Ryrie presented a chapel lecture series on the gospel of Luke. That was around 1969. His exegetically-based exposition was clear and captured our attention as students.

Above all else, his work on dispensations proved to be the most significant and continues to have an impact even today, so many years later. 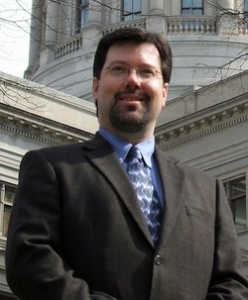 Dr. Charles C. Ryrie is now with the Lord, and as I recollect upon his ministry, I can scarcely express enough appreciation for his lifelong service of Christ Jesus.

I had the splendid privilege to be a speaker at conferences where he spoke, and on one of those occasions I recall Dr. Ryrie advising, “Have something to say and say it clearly.” Although he would agree that his essentialist approach to the definition of dispensationalism was not “inspired,” I am grateful for Dr. Ryrie’s “clear” articulation of the crucial issues of defense in regard to dispensationalism.

I always found Dr. Ryrie to be gracious and humble, always emphasizing he was the layman’s Bible teacher, as he possessed the remarkable ability to communicate intricate theology in an unambiguous manner. He demonstrated a characteristic devotion for Christ and his Word, and epitomized the Reformation battle cry of sola Scriptura as the believer’s ultimate authority; and, therefore, did all he could to explain Scripture in simple language so that the common person would be able to understand it.

I am most thankful for how he ministered to me on many occasions, as helped me understand the Bible more readily through his teaching. I will miss his Biblical directness and his humorous wit, and look forward to that joyous day when the Lord Jesus Christ returns as promised, and all the saints go marching into the kingdom of God. 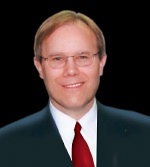 Dr. Charles Ryrie was so instrumental in formulating my theology. His seminal writings were the basis of many of my theology courses as a student. His students served as my professors at every level of my education.

Dr. Ryrie’s influence on my life and my ministry has been profound and I have a huge debt of gratitude to him. And the same would be echoed by the members and churches of IFCA International. We honor his memory.

Though I never met Dr. Ryrie, I am deeply indebted to him. His books and articles have impacted my approach to Scripture. His insistence  that God says what He means and means what He says resonated with me. I appreciate the fact that he influenced us to take the Bible at face value in all of the rich genre the Lord employed in giving us the revelation of His mind and will.

As a student my thinking was molded by his book Dispensationalism Today. As a teacher, I used Dispensationalism Today and Dispensationalism to help train the next generation of expositors and theologians. I have also used Basic Theology  for college theology, which I highly commend to your attention and use. Recently I was asked to produce a “short list” of recommended books for a new pastor. It was a “no-brainer” to include Dispenstionalism in that list. A big part of the reason I moved north for semi-retirement was to mentor/disciple my grandson, who is looking to be in ministry. You guessed it. Soon, we will be working our way through Dispensationalism.
It is not trite to say that only eternity will reveal  the powerful influence of Dr. Ryrie’s life and writings. As Abel, ” He being dead still speaks” (Heb. 11:4, NKJV). 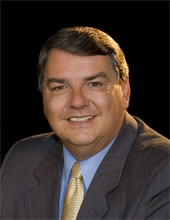 While salvation is the same for every child of God, not all of God’s children are saved for the same purpose. This is the essence of Paul’s teaching about “many members in one body” (Rom. 12:4, KJV).

Charles Caldwell Ryrie was saved to expound God’s Word, and did he ever do it well. His contributions to our understanding of God’s Word are as gargantuan as they are glorious. His study Bible alone is one of the most useful teaching tools the church has.

I have even met people who were so dependent on Dr. Ryrie’s notes that, when you asked them what version of the Bible they used, they would reply “Ryrie.”

The treasures he left behind are only exceeded by his reward in Heaven.

Please comment below with your own tribute to Dr. Ryrie!

We will conclude our remembrances of Dr. Ryrie by sharing testimonies from Ken Ham, Dr. Manfred Kober, Dr. Ed Hindson and Dr. Randy White, among others. We trust that these testimonies are a blessing and encouragement to you.