The Lord God not only announced His covenants on behalf of His servants, He proclaimed them at times of crisis or change for His people. These were times when God’s people needed Him. Therefore, He instructed them to focus on Him rather than upon their circumstances. Let us look at each of the Israelite covenants from this perspective of crisis and change.

Crisis: God commanded Abraham to leave his family and his homeland (Gen. 12:1-3) in order to migrate to Canaan. Obedience meant leaving Ur and all of its idolatry to serve the living God in a new land. By God’s design Abraham’s descendants would become a blessing to all the world. When God inaugurated His covenant with Abraham (Gen. 15:1-21), He appointed the Hebrews as His possession and His representatives on Earth.

Change: This involved separation from idolatry and separation from Mesopotamia. Abraham’s migration marked off a specific people for Yahweh in a location of His choosing. The near fulfillment involved the Hebrew people. The far fulfillment comes about through a continual narrowing of the covenant people—only the descendants of Jacob. Eventually the focus narrows to Judah among the tribes descended from Jacob and to the descendants David. The Messiah, the greater son of David and “the Lion of the tribe of Judah” (Rev. 5:5), brings the ultimate blessing upon the world and will finally establish the Davidic throne over the future millennial kingdom.

Crisis: In order to establish this covenant God separated Israel from Egypt, removing the nation from slavery and leading them into a great wilderness where they had to depend upon Him for their survival (Ex. 12:1–19:6).

Change: God narrowed His people to the Israelites out of all of Abraham’s descendants. God demanded His people’s obedience to His law (Torah), which contained the covenant’s stipulations/obligations. The near fulfillment applies to the nation of Israel and to its individual citizens. Its distant fulfillment, however, comes about in the future Messianic kingdom during which God repeats His former instructions to Israel, so that they might finally learn the significance of the sacrificial system which He had commanded them to observe (cf. Ezek. 40–48).

Crisis: At a time when the covenant people and their priests violated their covenant obligations through immoral living, Phinehas proved zealous for God’s holiness (Num. 25:10-13), so God rewarded him by appointing his descendants to serve alongside the future Messiah in His kingdom (Jer. 33:17-18).

Change: This covenant identifies a specific line from among the Levites—the Zadokites (Ezek. 40:46; 48:11; Zech. 6:13). The appointment of the Zadokites heralded the discontinuation of the high priesthood at some point in the future. Indeed, that occurred when Jesus became High Priest (Heb. 5:4-10). An inherent relationship exists between the Mosaic and the Priestly covenants, since the obedience required of the priests relates to the law of Moses.

Change: Deuteronomy 29:1-9 reveals that this covenant is distinct from the one proclaimed at Mount Sinai. Therefore it was more than just a renewal of the older covenant.[1] Continuity remains, however, since both covenants require obedience to the law and Israel is God’s people. This covenant focuses specifically upon a new era, a new beginning, within the land of promise itself—Canaan.

Crisis: Israel reached another juncture in history when they rejected God as their only King and requested the coronation of one of their own as their national leader (1 Sam. 8). Their first king (Saul) failed to live up to their high expectations and failed to live a life of godly submission to the nation’s true King, Yahweh (1 Sam. 15).

Change: Therefore, the time had come to remind God’s people of His prophetic announcement concerning a descendant of Judah in Genesis 49:10, as well as to reveal the linear descent of King Messiah through one family in the tribe of Judah. God rejects Saul and instructs Samuel to anoint David as king (1 Sam. 16). Obedience to the Torah continued as the standard of conduct. The Davidic Messiah must be obedient—He must fulfill the law.

Crisis: The last of the six Israelite covenants revealed the ultimate blessing—a spiritual blessing: forgiveness of sins. The crisis consists of the necessity of separating from sin (Jer. 31:27-40).

Change: God had already provided a preview of the New Covenant at the time He revealed to Moses that there must be a covenant that differs from the Mosaic Covenant. Yahweh told Moses that the circumcision of the heart supersedes the circumcision of the flesh (Deut. 30). The latter (physical circumcision) served as the sign of the Abrahamic Covenant, but the first (spiritual circumcision) stood as the sign of the New Covenant. God’s people are still Israel—He established the New Covenant with them. In no way does this indicate that the church does not later become a participant in the benefits of the New Covenant. Hebrews 8:6–10:39 speaks of Christ’s high priestly ministry and sacrifice and the salvation of New Testament believers in Jeremiah 31’s terms (cf. Luke 22:20). All New Covenant blessings that the church experiences are routed through Israel via the Messiah. With regard to Israel, covenant obedience relates to the Mosaic Law, but their obedience will issue from a new heart that recognizes the spirit of the law, not just the letter of the law (cf. Rom. 2:25-29; 7:6; 2 Cor. 3:6). 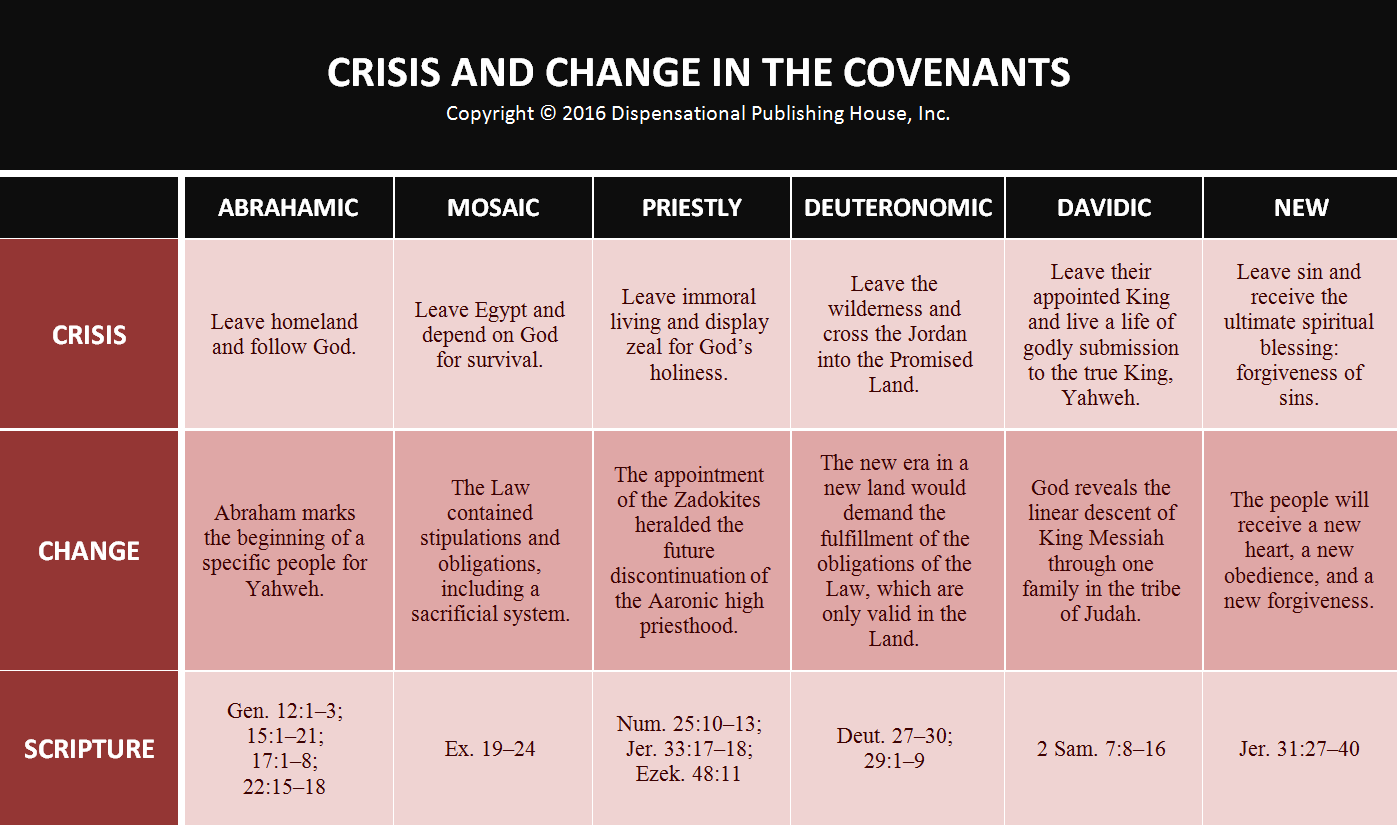 Therefore, the six Israelite covenants follow the progress of Divine revelation for God’s people in sequential periods of time. Each covenant adds more revelation to the previous to expand its purview. However, no covenant supersedes or nullifies any previous covenant. The covenants never accomplish salvation from sin—God’s people enter into the blessings of the covenants after their salvation. In addition to the crisis points historically, which become the times of covenant revelation, the proclamations of each covenant entail subsequent events of significance: