Editor’s Note: I first heard the name Andy Woods about 10 years ago, when he was interviewed on a CD by the late Dr. Mal Couch. I immediately sensed that we saw the world through the same lenses, and began listening to his material every time I came across it. What a privilege it is now, therefore, to work directly with Andy through Dispensational Publishing House and to be the first to present a major interview article about his brand new role as the president of Chafer Theological Seminary. All of us at DPH certainly congratulate Andy and pray for nothing but the best for him in this office.

If you instruct the brethren in these things, you will be a good minister of Jesus Christ, nourished in the words of faith and of the good doctrine which you have carefully followed. (1 Tim. 4:6)

Dr. Andy Woods was installed as the next president of Chafer Theological Seminary at its annual Bible conference on Monday, March 13. He humbly views the new post as a further extension of God’s providential working in his life.

“I think God sometimes speaks to us through circumstances,” Woods stated. “And these circumstances were undeniable.”

Woods is the senior pastor of Sugar Land Bible Church in Sugar Land, Texas, and spent the previous seven years teaching full-time at the College of Biblical Studies in Houston. When his position there ended, Woods considered it an opportunity for God to lead him into a different type of ministry.

“I looked at that as the sovereignty of God that I should do something else,” he said. “I just took it as God speaking through this.”

Most importantly, Woods sees this new role at Chafer as being a very good fit for all involved.

“I appreciate their view of the presidency,” he said. “In modern higher education, a president really is a fundraiser. Chafer really wants to get back to a (Dr. John) Walvoord model, where he is there to provide theological direction to a school.”

Woods anticipates teaching online for Chafer, and will also continue as the pastor of Sugar Land Bible Church.

“It is hard to teach people to be pastors if you have never been one, so they are very open to me pastoring while I do this,” he said. “All of the teachers that I got the most out of were pastors simultaneously.”

One of Woods’ goals is to help the school continue its transition to online education through the expanded use of technology. 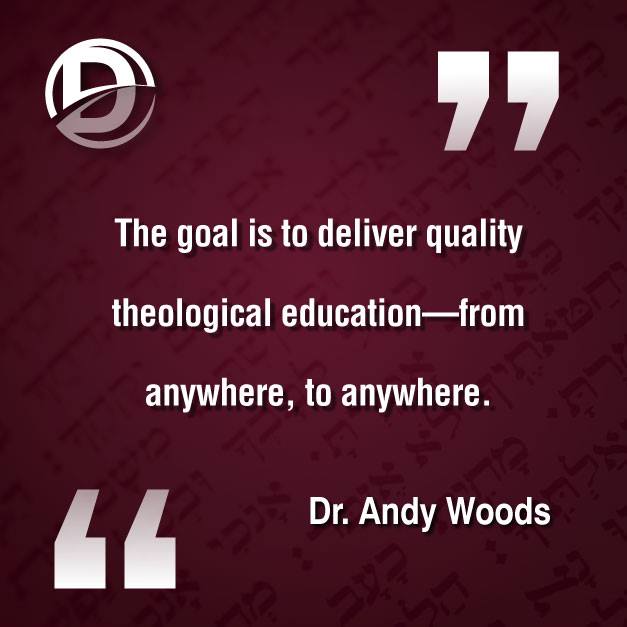 “Because we are moving heavily into distance learning, they are moving away from a brick and mortar school,” he said. “‘The goal is to deliver quality theological education—from anywhere, to anywhere. Teachers as well as students can be worldwide.”

Along with that, Woods also hopes to help balance out the curriculum to make it even more Biblically solid.

“I am going through the curriculum to make sure it is internally consistent,” he explained.

“One thing I felt the school needed is more synthesis,” he stated. “The school places a huge emphasis on Greek and Hebrew, which I am completely a fan of. But sometimes it is like looking at the veins on the leaves of the trees so intently that you forget what the forest looks like, and I have noticed that in environments where there is a huge emphasis on original languages. I do not want to change anything about original language, but my Ph.D. is in synthesis—tracking the argument of a book—and you need both. I am going to try to implement more courses related to synthesis to supplement language studies.”

Currently Chafer is not accredited—which touches on a subject about which Woods has some strong opinions.

“I have very mixed feelings about accreditation,” he said.

“You get a lot more students, but once you get it, what takes over the school is pleasing the accreditation authorities, most of which do have the doctrinal distinctives that we love. The solution is to think about not getting it at all, so you do not lose control of your school.”

“There has to be some way to retain control over the direction of the school, or else you just lose why you started,” he said—adding, “If God wanted us to do that He would have to provide, because it takes about a million dollars to even go down that road. It is a very expensive process.”

Dr. Andy Woods is the author of “The Middle East Meltdown” from Dispensational Publishing House. Watch for more DPH projects involving Woods to be announced in the days ahead.

Woods drew a comparison between Chafer and his own alma mater—the founder of which (Lewis Sperry Chafer) provides the namesake for Chafer.

“Dallas Seminary for decades was unaccredited,” Woods stated. “People went there—not because it was accredited. They went there to learn from the giants, like John Walvoord and others. You do not need an accredited degree to be a pastor. What we are trying to do is train people for the pulpit.”

Woods took three classes on campus at Chafer before attending Dallas, where he received his master of theology and doctor of philosophy degrees.

“When I go back over those notes, there was far more depth in the Chafer notes than what I got elsewhere,” he said. “We go through your curriculum at Chafer and you are actually being influenced by the theological writings and categories espoused by Lewis Sperry Chafer.”

Having said all of that, what will draw students to Chafer?

“The draw is our doctrinal distinctives.” 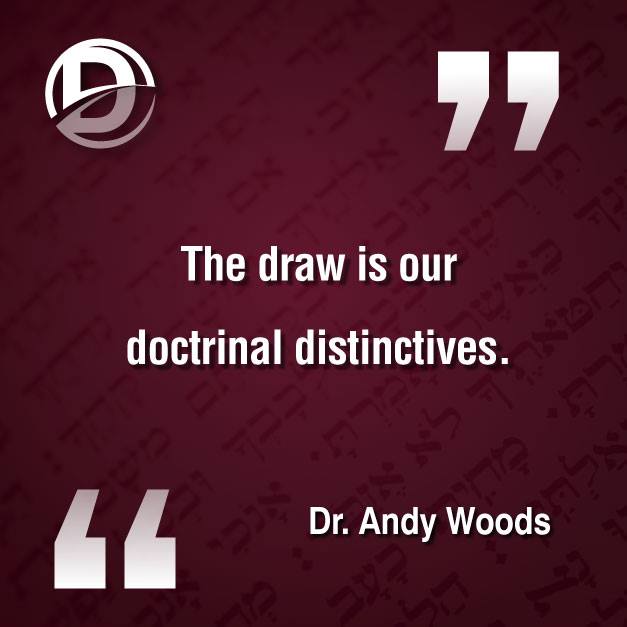 “At Chafer, the purpose is to promote Biblicism. Our authority is the Bible. The ultimate goal is preparing people for the pulpit,” Woods stated. “I can’t remember who said it, but as go the seminaries, so go the churches.”

Woods described his theology as follows: “I hold to a belief in full inerrancy, a belief in a literal hermeneutic for the entire Bible (taking into account figures of speech when they are evident). Once you have that down, that sort of takes you into the dispensational, pretribulational, premillennial eschatological viewpoint, and it also takes you into the young earth view of Genesis 1 to 11.”

“I would say that most of our guys are young earth,” he said. “We are basically in the Henry Morris/John Whitcomb line of thinking, which is really opposite of where everyone wants to go today. They want to look at ‘science falsely so called’ (1 Tim. 6:20, KJV), and rewrite the Bible to accommodate science. Morris and Whitcomb gave us a new strategy.” 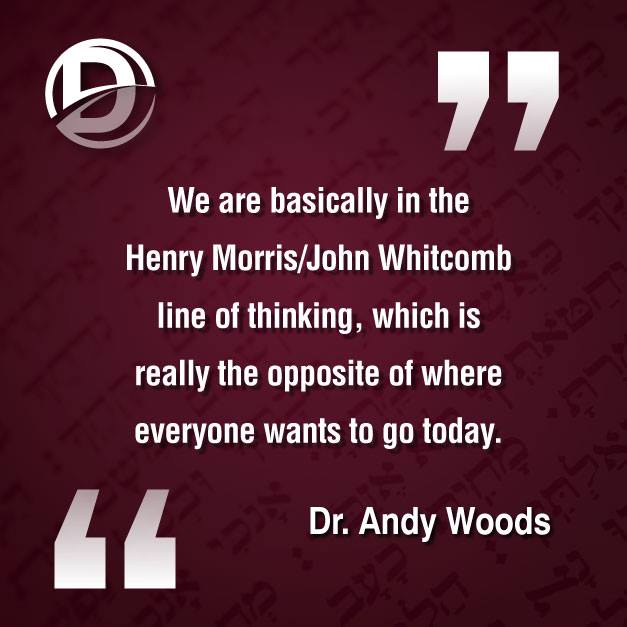 “That is the beginning of the Bible and the end of the Bible,” Woods continued. “You go to the middle of the Bible, and it would be more of a free grace/Chaferian doctrine of salvation,” he said. “I would consider our view to be what I would call traditional free grace. Once you move into an Israel/church distinction—and this is one of Lewis Sperry Chafer’s passions—you keep the gospel uncluttered with human works in its presentation to unbelievers. I look at Lewis Sperry Chafer as the fountainhead of traditional free grace teaching.”

To answer a common question, Woods contrasted his view of soteriology with one that has seen a vast increase in popularity in recent years.

“I am just a Bible guy. I do not want to be hemmed in by a philosophy. You use the word Calvinism—some people mean one thing by it, some people mean something else by it. I like to call myself a Biblicist.”

To sum up, Woods has a passion for his new role, and is anxious to begin the work.

“I feel the Lord leading me this way,” he said. “One thing I do see is a need. We get calls all the time at Sugar Land—people saying they cannot find a Bible teaching church. There is, as Amos said, a famine for the Word in the land. I feel the need to train people to be accurate Bible teachers—rather than the latest scholarly fad. To get into the Word and rightly divide it so that God’s people can be fed. That really is my motivation at the end of the day.”

“In a lot of seminaries, their goal is really to change the student, so the student will really change the church. A lot of people are really frustrated with that. We want to emphasize ‘the whole counsel of’ God’s Word (Acts 20:27),” Woods stated, “not specialize in a part of it. When you take away Genesis, it affects your eschatology. 2 Peter 3 connects the two. It is all connected. When you take away one part of the Bible, it affects another.” 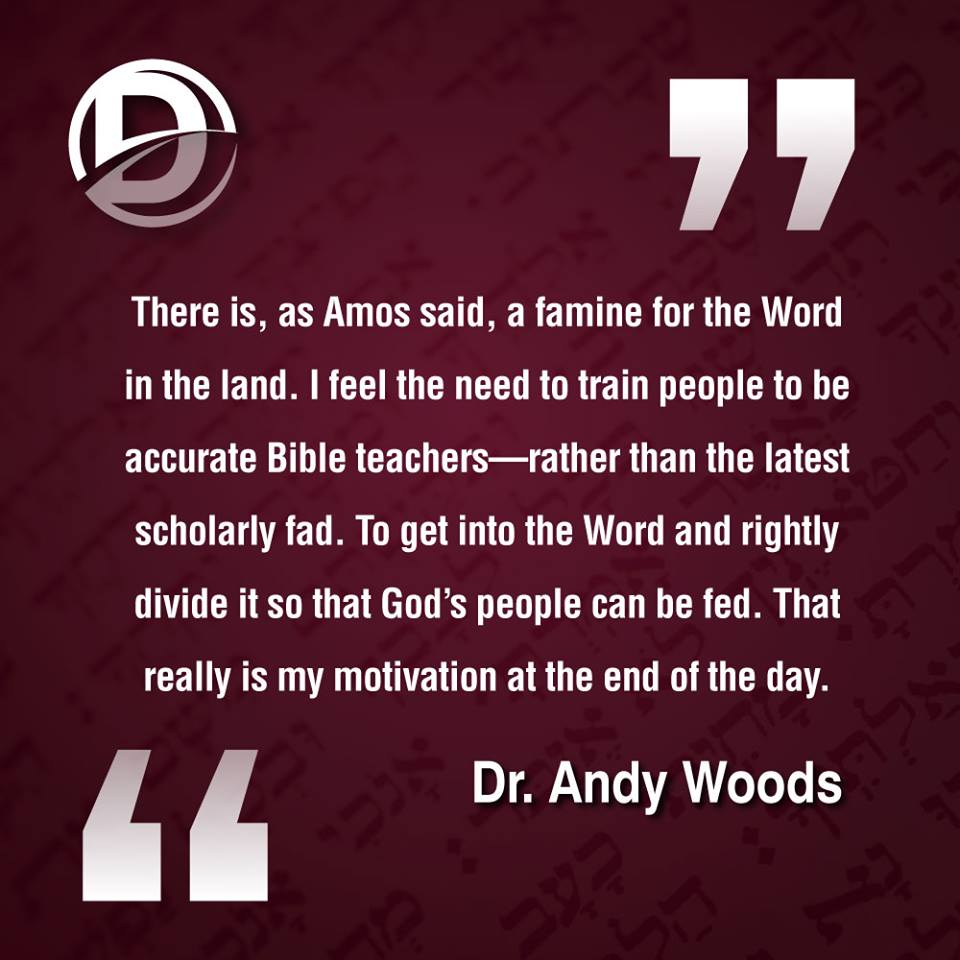 Editor’s Note: You can view the installation of Dr. Andy Woods as president of Chafer Theological Seminary here: