An Introduction to Biblical Dispensations

An Introduction to Biblical Dispensations

God always demonstrates His goodness and kindness, His righteousness, His holiness, His faithfulness, His sovereignty and His grace-filled forgiveness. These attributes comprise the theological heritage of the Israelite covenants. The test for His people consists of comparing their goodness, kindness, righteousness, holiness, faithfulness, rulership and forgiveness to that of their God. This focus on sanctified living brings us to the transition from the Biblical covenants to the Biblical dispensations.

Biblical Dispensations
My purpose in turning to the topic of Biblical dispensations is to examine their relationship to and comparison with the Biblical covenants. The following is not intended to present a detailed identification and description of the dispensations.

A Biblical dispensation (oikonomia—1 Cor. 9:17; Eph. 1:10; 3:2, 9; Col. 1:25; 1 Tim. 1:4) identifies the “administration of a household.” The Greek word combines oikos (“house/household”) and nemō (“manage” or “administrate”). Such administration includes the rules of a household—how one ought to behave as a member of that household. Modern fathers employ the same concept when explaining to a 22-year old son his responsibility to live under house rules as long as he chooses to live under his parents’ roof. In the theological equivalent, God uses oral and/or written revelation to explain His will to His people, so that they might know how to live for Him. With new or added revelation, the requirements might change for the subsequent period of time.

For example, God’s household rules involving His people’s diet go through a series of changes:

In other words, if God reveals changes in His appointed diet for His people from one era to the next, then we could certainly look for similar progressive, time-limited changes related to other areas in the daily lives of His people. We hasten to point out, however, that such changes deal with sanctified living, not salvation.

Salvation remains the same throughout all periods of mankind’s history. Observe the following common theological elements regarding salvation:

What elements have changed? Only the time perspective changes: the period of time prior to the work of Messiah in His death and resurrection and the period of time following His accomplished work. The people prior to Messiah’s work looked forward to the fulfillment of the Messianic prophecies; the people living after Messiah’s work look back on the past fulfillment of the same Messianic prophecies. Therefore, Peter revealed that the ancient prophets never asked “Why?” “How?” “Who?” “What?” “For whom?” or “With what result?” They only asked “When?” and “In what kind of time?” (1 Pet. 1:9-12; cf. v. 11 in ASV, NIV, HCSB, NLT and NET Bible [see note also]). God gave progressively clearer revelation regarding the details of salvation from sin, but that revelation sufficed in every era so that people believed and were saved in every era from the fall to the present.

The association of text units with each dispensation rests upon the general purpose and content tied to a specific period of time bounded by two things: (1) an initial revelation; and (2) an ultimate judgment based on that revelation. A variety of texts relating to the dispensations might be found outside the general framework presented in the following outline, since the Old Testament books and their contents do not always follow a chronological sequence from Genesis through Malachi and prophetic material sometimes announces events far in advance of their occurrence. 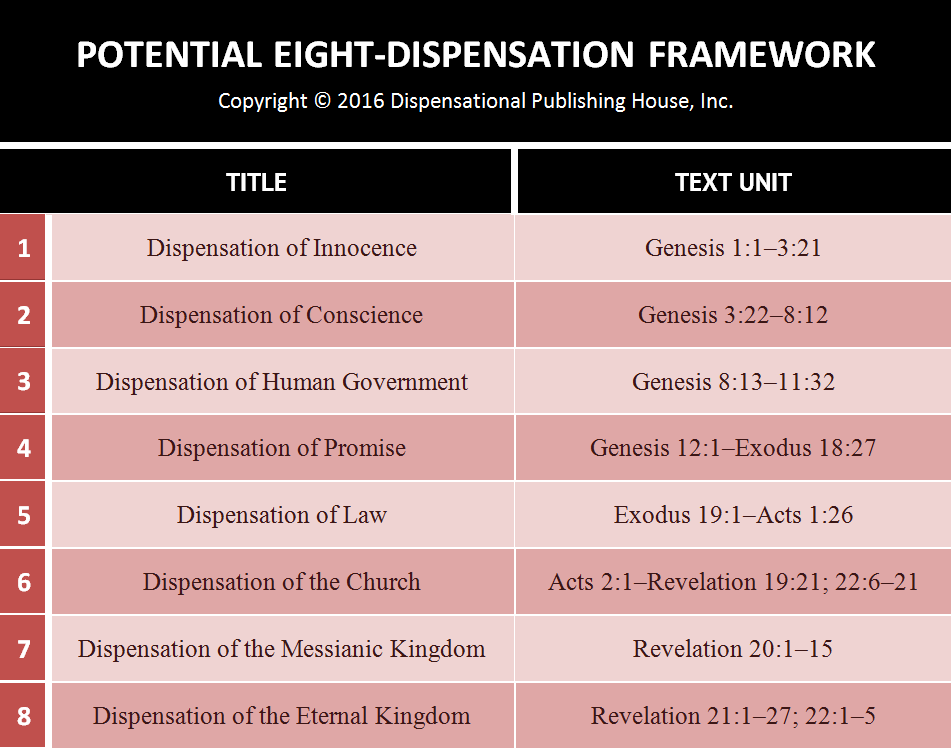 Follow the hyperlinks for information on the other versions referenced with regard to 1 Peter 1:11.