Let every soul be subject to the governing authorities. For there is no authority except from God, and the authorities that exist are appointed by God. Therefore whoever resists the authority resists the ordinance of God, and those who resist will bring judgment on themselves. For rulers are not a terror to good works, but to evil. Do you want to be unafraid of the authority? Do what is good, and you will have praise from the same. For he is God’s minister to you for good. But if you do evil, be afraid; for he does not bear the sword in vain; for he is God’s minister, an avenger to execute wrath on him who practices evil. Therefore you must be subject, not only because of wrath but also for conscience’ sake. For because of this you also pay taxes, for they are God’s ministers attending continually to this very thing. Render therefore to all their due: taxes to whom taxes are due, customs to whom customs, fear to whom fear, honor to whom honor (Rom. 13:1-7).

Our nation chose a new leader this past week. And like many of you, I watched late into the evening on Election Day—and into the early morning hours of the next day—waiting to see precisely who our next president would be.

Eventually, the winner was declared and America made it through yet another presidential election that many are now calling historic. In fact, as I watch the mainstream news coverage in the days since the election, I notice that this word historic keeps coming up again and again. Whenever we find ourselves in unprecedented times as a nation, it is helpful to keep things in context by reviewing past history. After all, how can we know if these are truly historic times for our nation, as so many are saying, if we do not know the real history of America? 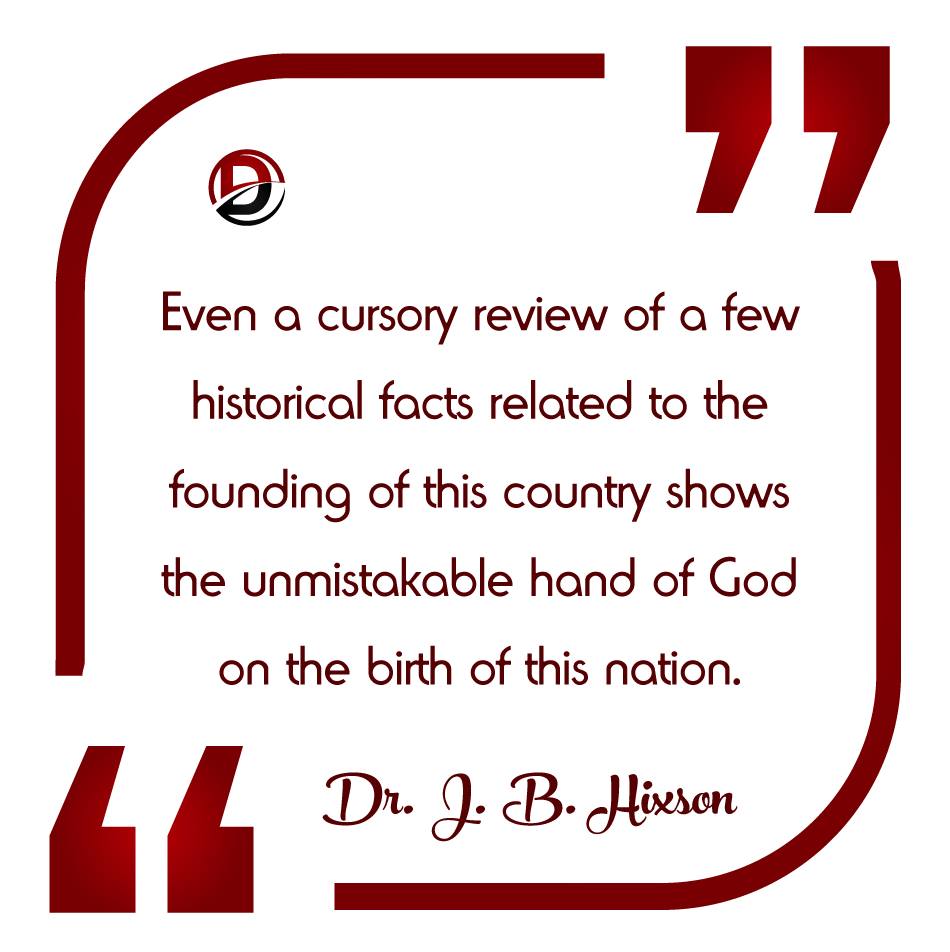 Even a cursory review of a few historical facts related to the founding of this country shows the unmistakable hand of God on the birth of this nation. While it certainly is true that not all of the Founding Fathers were Christians, and while there is no doubt there was a nefarious agenda on the part of many individuals who were instrumental in the establishment of our republic, and while it should be further noted that the founding of this great country occurred within a complex set of geopolitical world events that were by no means universally godly or Christian—there can be no doubt that the fingerprints of God are all over the place in American history!

The very words of the Declaration of Independence, “All men are created equal . . . (and) endowed by their Creator with certain unalienable Rights,” demonstrate that the Founding Fathers believed in a Divine Creator. They lived and operated in a world where the Judeo-Christian ethic was a pervasive part of the culture, even among non-Christians. In the 1600s and 1700s, the Biblical worldview was the prevailing lens through which almost everyone saw life. So it is not surprising to review American history and see the fingerprints of God everywhere.

For example, the cornerstone of the Washington Monument, laid in 1848, contains a copy of the United States Constitution, a copy of the Declaration of Independence and a copy of the Bible. Engraved on the monument are references to God such as, “Search the Scriptures” and “In God we Trust.”

Speaking of the Supreme Court, in 1892 the Supreme Court ruled 9-0 in a case known as The Church of the Holy Trinity vs. The United States, that “This is a Christian nation.” Justice David Josiah Brewer cited 87 precedents as he wrote the majority opinion (which, as mentioned, was unanimous). Here is a quote from Justice Brewer:

This is historically true. From the discovery of this continent to the present hour, there is a single voice making this affirmation. . . . These are not the sayings, declarations, of private persons: they are organic utterances; they speak the voice of the entire people. . . . These and many other matters which might be noticed, add a volume of unofficial declarations to the mass of organic utterances that this is a Christian nation.[1]

Whatever else may have had an influence on the birth of our nation, the Christian foundation simply cannot be denied. One thousand years before Christ, and nearly 2,800 years before America declared her independence from Great Britain, King David asked,

If the foundations are destroyed,
What can the righteous do? (Ps. 11:3).

Righteousness exalts a nation,
But sin is a reproach to any people (Prov. 14:34).

Dr. J. B. Hixson is the president of Not By Works Ministries and the host of Not By Works with Dr. J. B. Hixson, a national, daily half-hour radio program. Hixson has traveled to all 50 states and spoken in more than 500 churches and conferences. He also has wide experience as a pastor, professor and Christian college administrator and is the author of six books. Dispensational Publishing House is grateful to include him as one of our contributing authors.

Read A Dispensational Discourse with Dr. J. B. Hixson