How did Noah get all of the animals on the ark? And how could he ever take care of them all?

We have several keys within the text of Scripture that help us answer these questions.

According to Genesis 6:19, Noah was to “bring” all of the animals into the ark.

Surely this process would take years! It seems that it would involve building live traps, setting out bait and perhaps corralling the larger animals into the ark by means of a labor-intensive process.

Actually, none of this happened at all. Genesis 6:20 clarifies: “Two of every kind will come to you.” In other words, this was a supernatural process that God oversaw, not a naturalistic one. By his own ingenuity, Noah and his family simply could not have collected all the needed animals.

However, he did pack their food onto the ark (Gen. 6:21). But that also raises more questions.

How could Noah and his family ever possibly look after the needs of every animal on the ark? If they were to devote 24 hours a day to feeding, watering, exercising and cleaning up after them, could they possibly get back to that first animal at the beginning of each day? What if just one of the animals would get sick—rendering the entire voyage useless for that particular kind?

Dr. John Whitcomb teaches that the animals were placed into a supernatural hibernation during the flood year. This would have required Noah to bring far less food and would have saved the human passengers an incredible amount of work. This may be the reason that the word for the animals’ “rooms” (Gen. 6:14) carries the idea of nests. Such a hibernation is also evidenced by the fact that there was no animal reproduction on the ark (cf. Gen. 8:17).

But even more directly, we find an amazing statement in Genesis 8:1:

Then God remembered Noah, and every living thing, and all the animals that were with him in the ark.

As Dr. Whitcomb often reminds us, the Hebrew word for remember has the idea of taking complete care or meeting one’s total need (cf. Luke 23:42).

Rest assured, there were no fatal animal fights on the ark, either. Another truth gleaned from Dr. Whitcomb is represented in the following chart: 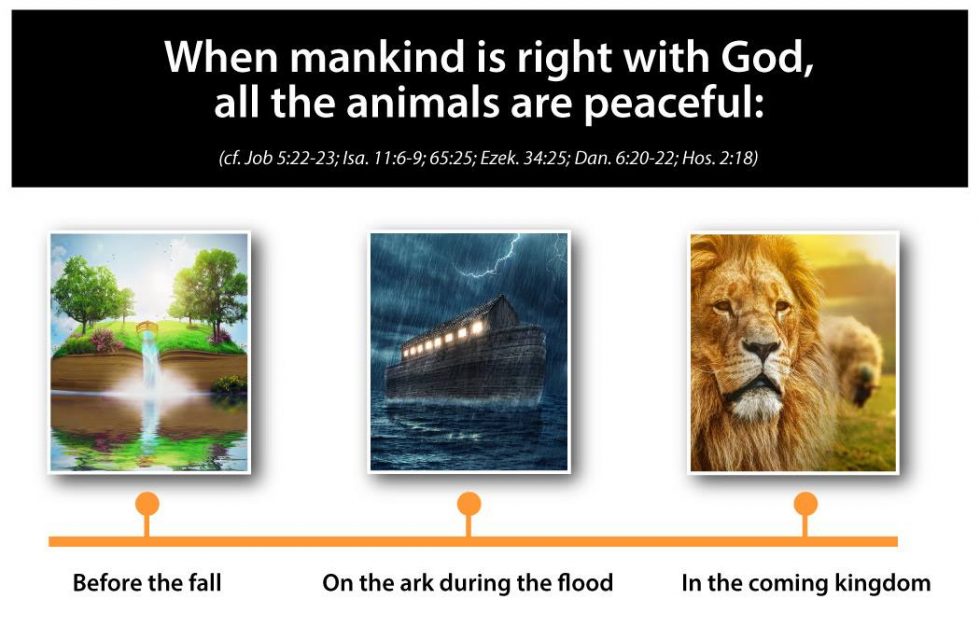 Let us consider a few more points about the flood.

The Chronology of the Flood
Chronology is vitally important all throughout the Bible. God created the world in six days. Christ rose from the dead on the third day. He will rule from Jerusalem for 1,000 years following seven years of tribulation. And there is an innumerable number of other details described in Scripture in terms of chronology—showing us that the Bible is based in real history.

Genesis 7 and 8 are also filled with references to chronology. Make note of them as you read and you will be amazed! This shows us clearly that Moses intended to communicate that the flood was not a fairly tale.[2]

In that light, consider the next point.

The Duration of the Flood
The MacArthur Study Bible summarizes:

This number makes it very easy for us to remember the length of this event. And we marvel at God’s care of Noah, his family and all the animals for just a little more than an entire year!

The Intensity of the Flood
The MacArthur Study Bible explains succinctly what the world may have been like before the flood:

. . . the pre-flood world order. . . . included the physical arrangement with the canopy above, the waters in the underground reservoirs, rivers, lakes, and seas below, and the heavens in the middle. The pre-flood world, sheltered from the sun’s destructive ultraviolet rays, and with a gentle climate without rain, storms, and winds, was characterized by long life of humans (Gen. 5) and the ability of the earth (like a greenhouse) to produce extensively.[4]

The intensity of the flood, which disrupted the world system described above, is explained in detail in Genesis 7:17-24. There were worldwide volcanic eruptions in combination with universal storms which ushered in massive changes both to the atmosphere (cf. Gen. 1:6; 2:5-6) and to the surface of the earth (cf. Ps. 104:5-9).

This was, in fact, the greatest catastrophe that the natural world has ever seen.

Notice, however, that the ark floated harmlessly in the water—clearing the highest pre-flood mountains even if as much as half its height sank into the water (cf. Gen. 7:19-20). 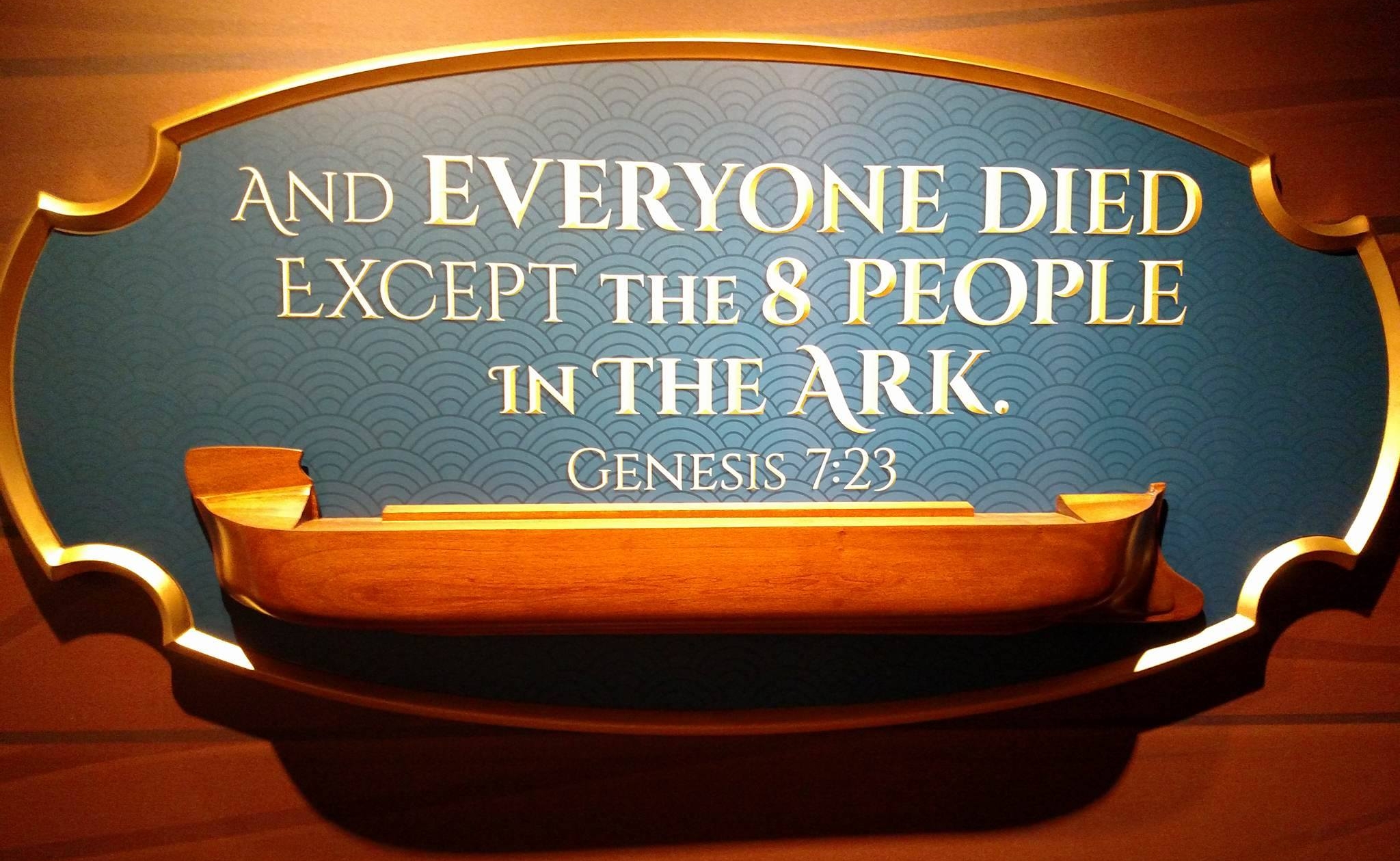 The Destruction of the Flood
Here is the point of the entire event. Both people and animals must surely have climbed the highest mountains to escape the flood, but to no avail.

And all flesh died that moved on the earth: birds and cattle and beasts and every creeping thing that creeps on the earth, and every man. All in whose nostrils was the breath of the spirit of life, all that was on the dry land, died. So He destroyed all living things which were on the face of the ground: both man and cattle, creeping thing and bird of the air. They were destroyed from the earth. Only Noah and those who were with him in the ark remained alive.

Though some claim that the flood was a localized event restricted to the ancient Near East, the text makes it clear that this was as a worldwide event.[5]

Notice that the judgment of the flood was . . .

Notice also the following applications that we may draw from the Bible’s teaching about the flood.

We can see that there was an element of prophecy associated with the events surrounding the flood when we consider (in logical order) Jude 14-15 and Genesis 5:29.

We also know that Methuselah would have died in the year that the flood came (outliving his son Lamech by five years), and that some believe the meaning of his name carried prophetic significance: “when he dies it shall come.”[7]

Looking at history through a Biblical lens, we realize that the geological record—the fossil record—tells us nothing at all about origins, but rather informs us regarding catastrophism. As Dr. Terry Mortenson often reminds us, the flood washes away all the millions of years, which still could never be enough to bring about the evolution of all things by chance through time.[8]

Peter, who was fascinated with the ark and the flood, informs us that Noah was “a preacher of righteousness” (2 Pet. 2:5). I infer on the basis of 1 Peter 3:20 that this preaching relates to the “the Divine longsuffering (that) waited in the days of Noah” and also see it correlating to the 120-year time period referred to in Genesis 6:3.

I believe that God extended the offer of grace to the world through the preaching of Noah, but that partaking of it fully would involve humbling oneself to go through the one door that led into the ark (cf. Gen. 6:16; 7:16).

Sadly, no one received that offer. Some, however, may have been saved spiritually even though they were lost physically—perishing in the waters of the flood.

Editor’s Note: You will find more from Scharf on this subject in the following installment of “Ask the Theologian”:

[1] See, for instance, John Whitcomb, “The Genesis Flood (Part 1),” <http://www.sermonaudio.com/sermoninfo.asp?SID=71162117273>; Internet; accessed 1 Aug. 2016. The points attributed here to Dr. Whitcomb may be found in a variety of places throughout his writings and recordings.

[2] For charts on the chronology of the flood, see: Multiple Faculty Contributors, “Genesis,” in The Moody Bible Commentary, ed. by Michael Rydelnik and Michael Vanlaningham (Chicago: Moody Publishers, 2014), “Chiasm in the Flood Narrative,” p. 57; John MacArthur, The MacArthur Study Bible ESV (Wheaton, IL: Crossway, 2010), “The Flood Chronology,” p. 27; David Jeremiah, The Jeremiah Study Bible (Franklin, TN: Worthy Publishing, 2013), “Flood Chronology,” p. 14; and Allen P. Ross, “Genesis,” in The Bible Knowledge Commentary: An Expostion of the Scriptures by Dallas Seminary Faculty, ed. John F. Walvoord and Roy B. Zuck (Colorado Springs, CO: Victor, 1985), “Chronology of the Flood,” p. 39. A careful study of these charts will reveal that interpreters are not united in their understanding of all the details involved.

[6] I credit Dr. Thomas Ice for the concepts behind these important contrasts. He has written several articles that develop them further in relation to numerous topics. See, for instance, “An Interpretation of Matthew 24-25 (Part 20),” <http://www.pre-trib.org/articles/view/an-interpretation-of-matthew-24-25-part-20>: Internet; accessed 1 Aug. 2016.