A Renewed Understanding of Hermeneutics

A Renewed Understanding of Hermeneutics

Principles of Biblical interpretation are the first order of concerns in structuring a doctrine or a comprehensive method of interpreting the Bible, foundational to correct exegesis itself. Often the order is reversed. It is often asserted with vigor that Biblical hermeneutics must come from interpreting the Bible itself, i.e., a simple matter of exegesis. But this appears to be a circular procedure, i.e., using hermeneutical principles on the Bible in order to find the Bible’s hermeutical principles (to be used on the Bible). But I would argue for a Biblical first principle or a presupposition regarding human language in the first place. This is drawn theologically from the Bible’s own use of language by human beings who possess rationality via the image of God in order to fulfill the dominion to rule the earth (cf. Gen. 1:26).

This methodology would then assert several principles for linguistic hermeneutics, Biblical or otherwise. One is that a word can only have one meaning in a usage, or in one and the same connection. Another is that words do not carry meaning autonomously but in combination with other words, i.e, a sentence. A third principle is that this selfsame word and its meaning cannot accrue or develop an expanding afterlife of changing meaning. A fourth factor is that the sentences thus constructed mean only what the author intended the words to mean. This is to say that language is univocal; it speaks with “one voice.” A rule of thumb here is that “a text cannot mean what it ne 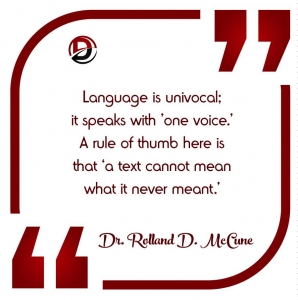 ver meant.” If words were equivocal in the same usage or connection, communication would be impossible. A language system then would need only one word, because that word would mean anything and everything, which is to say it means nothing—total irrationality.

This approach then calls for another authority, outside the text being interpreted, to extract the “real” meaning that God intended but of which the human author and his first readers/hearers were oblivious. Various interpretive methods external from the Old Testament, in this case, have been proposed to prevent the Old Testament author from being banished from his own writing. Basically these methods appeal to later written revelation to round out the Old Testament propositions. But in truth this only worsens the problem. Who or what is going to unpack the hidden meanings of the later revelation? Or is it simply presupposed that it is somehow exempt from all occult meanings whereas the earlier revelation is not? The danger here is that this methodology will (logically) land us in the morass of linguistic relativism that has plagued the hermeneutics of rational thought for millennia, including theology and Biblical exegesis. Call this complementing, spiritualizing, allegorizing or resignifying the earlier words, the overriding note of it all is the replacement of the original authorially-intended meaning, a fatal disease of hermeneutics.

It may be postulated that God’s infinite otherness and power remove Him completely from this mundane discussion of the relationship between the Bible and its human languages because “God can do anything.” Problem solved. But be reminded that this does not mean that “anything can happen.” My proposed understanding of this relationship yields a unified approach to the whole of the Bible. The truth-intentions of both the Old and New Testament authors are harmonized and correlated. Both therefore are mutually helpful and necessary for the consistency of the whole.