In the first installment in this series, we began to see an answer to this question: Is there a unifying principle to all of God’s activity?

Proposed Options for a Unifying Principle 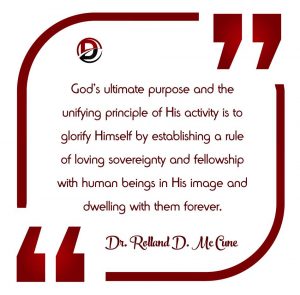 God’s ultimate purpose of getting glory to Himself would seem to entail a goal to His activity. This goal is that which unifies His activity, or becomes the fundamental rationale for what He does in glorifying Himself. The most primitive purpose of God is His activity to glorify Himself, but that purpose should be connected to some less remote, penultimate end on the historical level.

This goal, or unifying center, should also carry the means of attaining it. This involves the expending of God’s power and influences in order to accomplish this goal on the historical level. In other words, this goal, which becomes the principle of unification, entails a plan of achievement. This plan structures God’s activities in accomplishing the goal within earth history. This plan of achievement is the dispensational program of God, the progressive unfolding of Divine revelation and the resultant stewardship responsibilities that devolve on mankind.

This goal, or principle of unification, with its means of accomplishment will also be the central theme of Scripture. The Bible is the embodiment or the objective truth-deposit of the propositional, verbal revelation on this or any other subject of Divine attitude and activity.

God’s ultimate purpose and the unifying principle of His activity is to glorify Himself by establishing a rule of loving sovereignty and fellowship with human beings in His image and dwelling with them forever.

This principle involves a two-fold relationship:

This principle accounts for all the activities of God external to Himself, such as:

This program of stewardship responsibility began with the Dominion Mandate of Genesis 1:26-27, and is forwarded by the progressive unfolding of God’s revelational light in succeeding dispensations. The dispensational program is the means or structure by which God achieves His goal of a rule of loving sovereignty and fellowship. This program culminates in the mediatorial (millennial) kingdom of God on earth, which then issues in a transition to the eternal universal kingdom.

In the inscrutable wisdom and sovereignty of God, He both permitted sin to enter the universe and provided a means of reconciliation so that He could have fellowship with His image-bearers and be glorified in it all.

The consummation will be in the eschaton, in the Messianic, millennial kingdom and its transition to the eternal kingdom. God and His creation will be in perfect harmony as He rules in loving sovereignty. Each facet of the universe will glorify God to its fullest capacity.