A Dispensational Discourse with Mark Musser

A Dispensational Discourse with Mark Musser

Editor’s Note: Springtime is here—and with it come celebrations like Earth Day and Arbor Day. This begs the question: How should Christians view their responsibility to care for the Earth? Also, how should we respond to the vast and growing environmentalist movement that seems to desire ever-expanding control over so many areas of our lives? For a response, we turn to pastor, missionary, professor and author Mark Musser, whose book Nazi Oaks has created a thunderstorm of its own. I am honored to report that this book will be available shortly from our sister company, Trust House Publishers—with a forthcoming revised version to be produced by Dispensational Publishing House. How appropriate it is, then, that we talk with Mark in this month’s installment of A Dispensational Discourse.

I call heaven and earth as witnesses today against you, that I have set before you life and death, blessing and cursing; therefore choose life, that both you and your descendants may live. (Deut. 30:19)

Through a very unique combination of life experiences, Pastor Mark Musser has become an authority on the Biblical approach to Earth stewardship and the excesses—including, indeed, the largely unknown history—of the environmental movement.

“My dad and grandfather had a farm and they both passed away and they gave us the farm,” Musser explained. “It has been a big blessing to us.”

Although he pastors a local church, serves as a professor for Chafer Theological Seminary and continues as a visiting missionary to countries of the former Soviet Union, Musser also identifies as a farmer, and works the land that he grew up on, which has been in his family for generations. His family grows grass hay on 75 acres, and raises Hereford and Angus cattle. 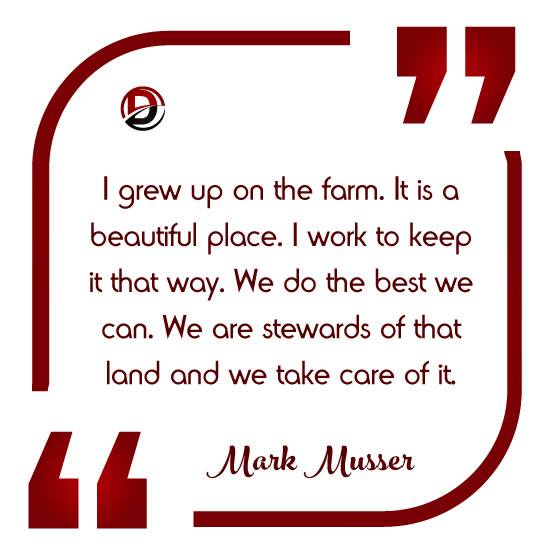 “I grew up on the farm,” he said. “It is a beautiful place. I work to keep it that way. We do the best we can. We are stewards of that land and we take care of it. People drive by and they tell us how beautiful our place is.”

However, Musser cautions: “Man is above nature. Nature is not his guide; God is. As a farmer, I can tell you that animals love gardens and farms more then they love wilderness. The wilderness is a tough place to live. A lot of these things are really not true—i.e., that animals need wilderness habitat to live. We are fed a lot of false ideas.”

Back in the 1980s, the farm boy went off to The Evergreen State College in Olympia, Wash., which Musser describes as “one of the premier environmentalist institutions in the country.”

“All of the stuff that we are being hammered with today, I heard all of this back in the mid-1980s,” Musser stated. “People laughed at it then, but now it is here.”

“They were criticizing Christianity from every angle that you can imagine. They laid the burden on Christianity,” he said. “That is when I found out that the environmental movement is not friendly toward Christianity. As a young Christian guy, I did not really know what to do. A lot of things that Christians are facing today, that we are taken aback by, I was facing it then. All of the colleges are teaching it today.”

But it was out of those experiences that Musser grew in his faith, strengthened his worldview and came to grasp the significance of dispensational theology.

“A good Bible-teaching church was the remedy,” he said. “A lot of Christians were not prepared. So, like an avalanche, they were not able to cope with it. God led me to a dispensational pastor—Ron Breckel at Grace Chapel in Kirkland, Wash. He went to Dallas Theological Seminary in its heyday, when every class was taught by a legend, so that really showed up in his ministry. That church helped me to survive Evergreen State College, and allowed me to have a ministry there.” 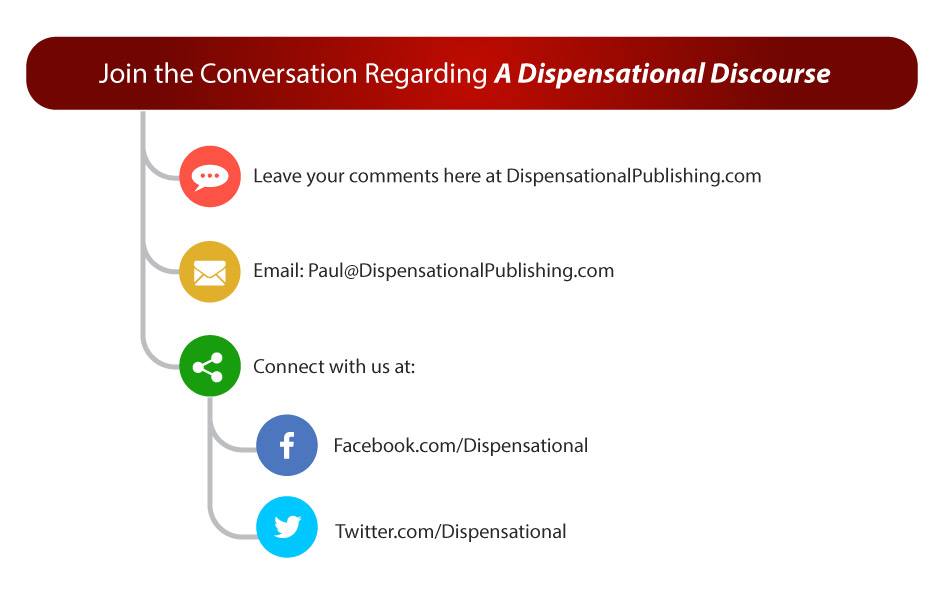 “That grace message, dispensationalism, really changed my life, and I wanted to become a pastor,” Musser says now as he looks back.

After graduating from college, Musser remained close to home but went to Western Seminary in Portland. The greatest influences upon him there were Dr. Earl Radmacher and Dr. Duane Dunham.

But God was still preparing Musser for a number of very unique ministries. His experiences at Evergreen State College were just one strand of a chord that God was weaving that would allow Musser to respond to the vast and growing environmental movement.

As a missionary to Eastern Europe and countries of the former Soviet Union, Musser absorbed as much as he preached.

“I learned in Ukraine and Belarus how serious World War II was,” he said. “I do not think Americans appreciate what went on there—such huge, gigantic battles. We are talking close to a million Russian and German casualties per battle. The real war was in the East. It was a very serious time. But so also was the Holocaust.”

“In Belarus and Ukraine, the Germans sent in these men who rounded up the Jews and shot them,” Musser explained. “We are probably talking one to two million Jews who died in this way. I learned all about World War II. That got me interested in the Holocaust.” 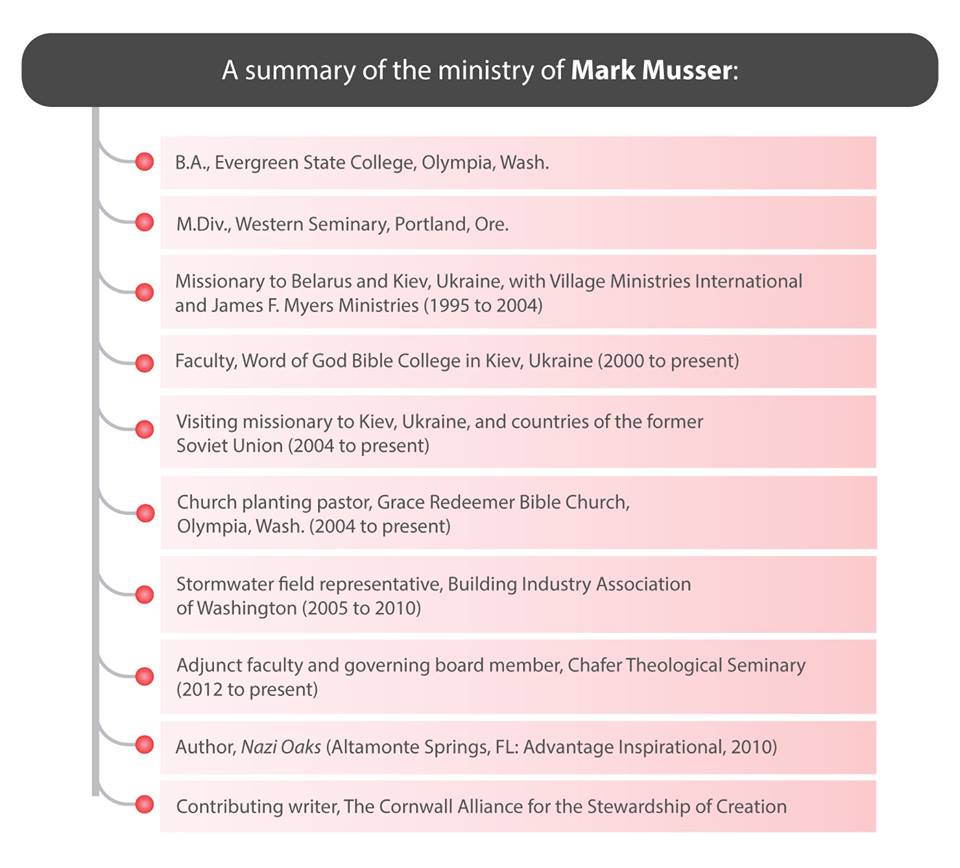 Musser had also worked on and off through the years for the Building Industry Association of Washington, so he turned to it for a job when he returned from the mission field in 2004. He learned that things were changing—quickly.

Musser noticed that there were many new environmental regulations being passed, and he was tasked with educating builders on them. 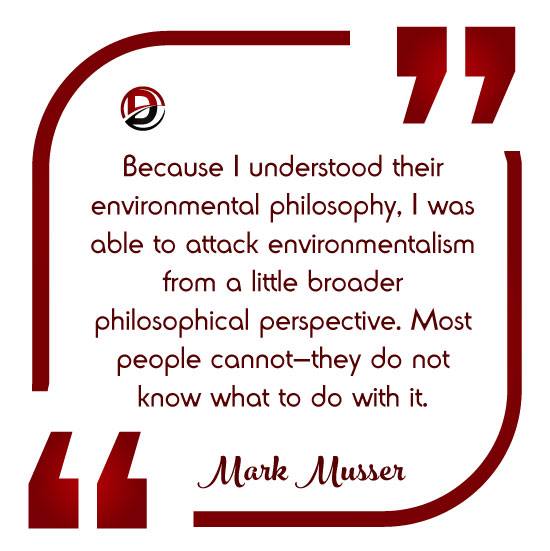 “The major battle was with environmentalism,” he said. “Because I understood their environmental philosophy, I was able to attack environmentalism from a little broader philosophical perspective. Most people cannot—they do not know what to do with it.”

Musser had to learn the new laws regarding soil erosion and the pollutants carried by rainwater. He was also charged with writing about these issues for the association’s newsletter. One typical topic that he addressed was how expensive some of the processes that were being mandated were for builders.

But then there was one article that really touched a nerve—so much so that it made statewide news. Musser’s research had led him to the discovery that a Nazi–Alwin Seifert of the SS—was one of the early leaders of what is today called stormwater management.

“I started looking into the green connections to National Socialism,” Musser said. “When that article came out, a lot of people got really mad. We got a lot of people upset with this—including people inside the building industry. I knew that I hit something. The more I looked into it, the deeper it got. A lot of the National Socialist philosophy was rooted in a philosophy of man and nature being rooted together as one. Fascism means holism. Their idea of a natural man was one in communion with nature. 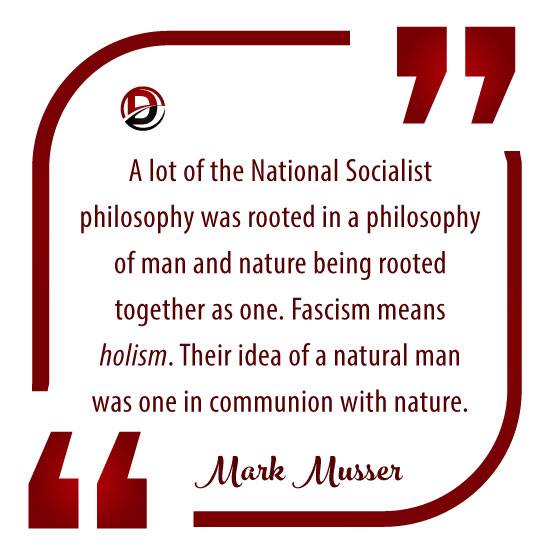 “I realized that I stumbled across something that I never imagined,” he stated. “What I discovered was that at Evergreen State College they were blaming Christians—the Puritans, especially—for environmental issues. The Germans were blaming the Jews for the same stuff. The Jews were considered these nomads who were not related to nature. In America, you have ecologists being anti-Christian. In Germany, they were anti-Semitic. The Germans were saying the same things about the Jews for 100 years. Then I discovered that environmentalism played a big role in the Holocaust, too. They were cleansing the homeland from Jews. They did not view the Jews as being natural. They blamed the Jews for ruining the environment by international commerce. This was at the heart of a lot of their thinking.”

Musser said that as he continued to research he began to understand much more about the nature of the Nazi Party.

“I am a conservationist,” Musser stated. “That is different. God is transcendent above nature. The law comes from Him. Environmentalism is really pantheism. Hitler was a pantheist. His god was nature. The whole point was to be in biological harmony with nature.” 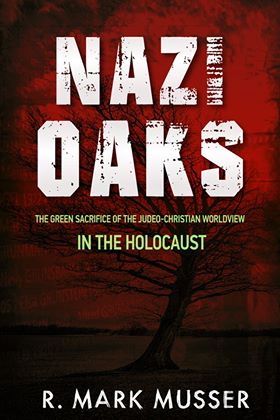 As to the name of Musser’s book—Nazi Oaks—Musser said it is based on a hunch that he has.

“Oak trees are important in German paganism.” Musser said that this belief system draws on pagan worship as found in the Old Testament and practiced throughout pagan Europe, which included animal sacrifices that were often offered under oak trees.

The Nazis also worshiped oak trees, which Musser interprets to mean that National Socialism wanted to “make Germany strong and beautiful through sacrifice.”

So what is his hunch that led to the title of the book?

“I can’t prove it—it is just a thesis—that the Holocaust was a human sacrifice of the Jewish people to help make Germany strong and return it back to nature.”

Musser explained that the word Holocaust is from a Greek word with Hebrew roots, meaning “whole burnt offering.”

“Hitler wanted to go back to the Greco-Roman empire, which was more in tune with nature,” he said. “After they got rid of the Jews they were coming after the Christians.”

Musser self-published Nazi Oaks because publishers were not interested in the book when he wrote it in 2010. Dispensational Publishing House is honored to be the new home for this widely-acclaimed and much-needed volume.

“You cannot worship nature” Musser stated. “It is beautiful. It communicates the glory of God. God reveals Himself through nature 24 hours a day, but God is the Creator. He is above nature. People want to get back to nature to make themselves purer. But actually, what happens is the opposite. According to Romans 1 to 3, God uses nature to judge the Gentiles. The Gentiles took the natural theology that they got from God and converted it into idolatry. They convert nature into nature worship. They worship idols. They should have given glory to God. That leads to their condemnation. Today we are trying to save nature, not people. That is a distortion of God’s original plan.”

“We try to solve things and we really cannot,” said Musser. “This really points to the fact that we need a Savior.” 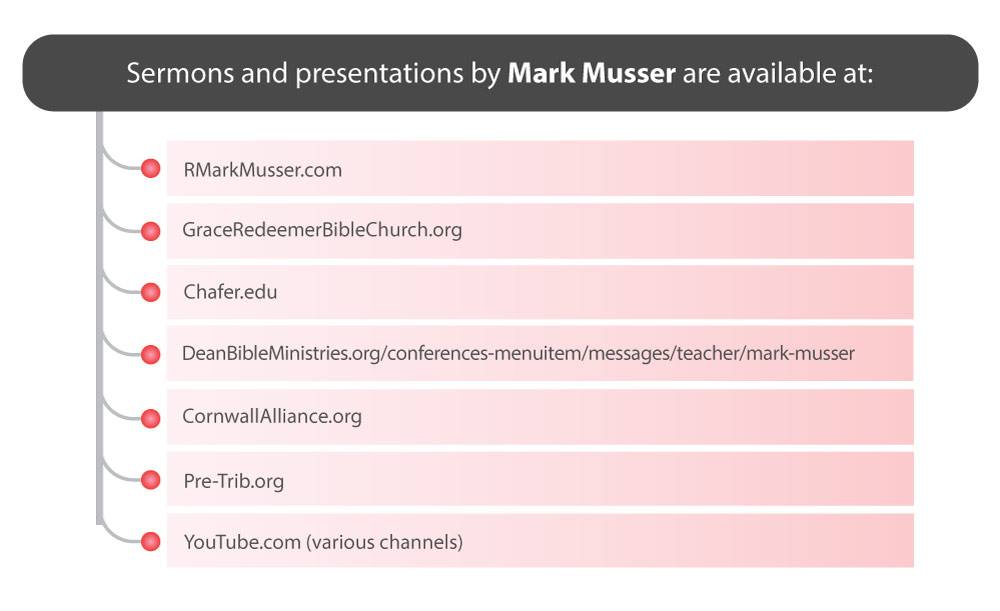