Editor’s Note: Dr. Paul Martin Henebury describes himself as “both an adherent and dismayed critic” of dispensationalism. If you do not know what he means by that, you should take the time to learn. There is much more to his understanding of these issues than we will be able to present in this article, but we hope to provide additional avenues for Paul to explain his views in the future—so stay tuned. Paul is an incredibly intelligent and gifted writer and teacher. He reads widely and thinks deeply, and we are blessed to work with him and to bring his thoughts to you in this edition of our monthly interview called “A Dispensational Discourse.” We are focusing here on the development of dispensational theology, and we mean that in more than one sense. I hope that you will be intrigued by what follows—and leave searching for more material from this good friend and great theological scholar.

For I could wish that I myself were accursed from Christ for my brethren, my countrymen according to the flesh, who are Israelites, to whom pertain the adoption, the glory, the covenants, the giving of the law, the service of God, and the promises; of whom are the fathers and from whom, according to the flesh, Christ came, who is over all, the eternally blessed God. Amen. (Rom. 9:3-5)

“I guess that I did not know that I had become a dispensationalist,” said Dr. Paul Martin Henebury of his early Christian experience. “I was very interested in the search for truth.”

Born in Manchester, England, Henebury did not find dispensationalism through any predictable means at all.

“I did not become a Christian until I was in my mid-20s,” he stated. “I was just on a search for truth. When I decided to turn to the Bible, it seemed to be a logical thing to read it at face value. I started in the gospel of Matthew. Even though I was encountering different literary forms, I did not see a reason to change that. The only way to get to truth is if you believe what something says. The Bible spoke about the kingdom, a future for Israel, a future for the church as distinct from Israel—and I did not question it until I started to read Reformed writers several years after I was saved.”

Henebury remarked: “I did not have a television for the first 10 years I was saved. All I did is read.” His first favorite Christian authors were W. Graham Scroggie, J. Dwight Pentecost and Clarence Larkin. “They basically underlined the kinds of things that I expected to be told,” he said.

Dispensationalism is not really current in England,” added Henebury. “It was the providence of God that I ran into some of the people that I did, and read some of the books that I did.”

“Charles Ryrie’s book Dispensationalism had a big impact on me because it really set out what I was,” he stated. “It clarified a lot in my thinking. The biggest one was Cornelius Van Til. Even though he was not a dispensationalist, his approach to Christian truth and the centrality of what God was doing in Christ—that Christ is at the center of what we are as human beings, what the world is, why creation is so important—it made me realize that theology is a worldview. The way that Van Til puts things together, he shows that the Christian conception of reality was the only viable conception. That was very important to me.”

Henebury said that another important early influence was Martin Lloyd-Jones. “It was his way of reasoning through the Scriptures that impressed me,” he said.

Henebury initially studied theology at the London Theological Seminary, which began through the influence of Lloyd-Jones in 1977.

The school is Reformed and teaches covenant theology. In fact, Henebury noted: “That is really the only game in town as far as they are concerned.” But Henebury learned much there and, in fact, established a foundation that would serve him well in later ministries.

Henebury served as the student librarian for Lloyd-Jones’ personal library collection, and truly felt the influence of this Christian giant “through his writings and through the people that knew him.”

“I was friends with people that knew him very well,” Henebury said. “It was the way that he dealt with the Scriptures that I was very impressed with. The truth is very important to me. You cannot read Lloyd-Jones without realizing that he really believed what he preached.”

As he went on, however, Henebury also realized that he was experiencing a clash between the theology he had learned in seminary and what he truly understood and believed.

“I was trying to get solid theological training to become a pastor in England,” he said. “What I found was when I went to candidate in churches, my dispensationalism became a problem.”

That led Henebury to come to America in 1996. He was involved with several church ministries in California before furthering his education at Tyndale Theological Seminary.

“That was probably the influence of Martin Lloyd-Jones on me,” he said. “I have a problem with accreditation. I think accreditation is a bit of a sellout to the world. I think it does tend to treat theology as a subject—instead of as the truth. Tyndale was not interested in impressing the world—they were just interested in holding the line.”

At Tyndale, Henebury was studying and working in an environment that was completely committed to traditional dispensationalism—but he continued to think for himself.

Blogging as “Dr. Reluctant,” Henebury describes himself as “both an adherent and dismayed critic” of dispensationalism. So, what exactly does that mean?

I am an adherent because there is really hardly anything of classical, normative dispensationalism that I do not agree with, as far as the primary issues—the plain sense hermeneutic, the distinction between Israel and the church, the importance of Bible prophecy, the pretribulational rapture, seven years of tribulation, the reign of Christ,” he explained. “I think in its main tenets, I would have no disagreement at all. I find them fully Biblical and fully persuasive. I find them logical, too. They best translate what the Bible is saying.”

So, what are the issues of which he is critical?

For one thing, Henebury sees no good explanations being offered for the system as a whole. Instead, he said, all the effort has gone into defining specific dispensational beliefs.

Henebury notes that the traditional names for the dispensations are “semantically in different fields,” stating: “They do not describe a continuity. They are discontinuous one with another.”

He goes on: “One of my principle issues with dispensationalism is that dispensations do not provide a prescription for anything. They are purely descriptive. You cannot actually put a system or a worldview together with them, because the foundation is not big enough.” 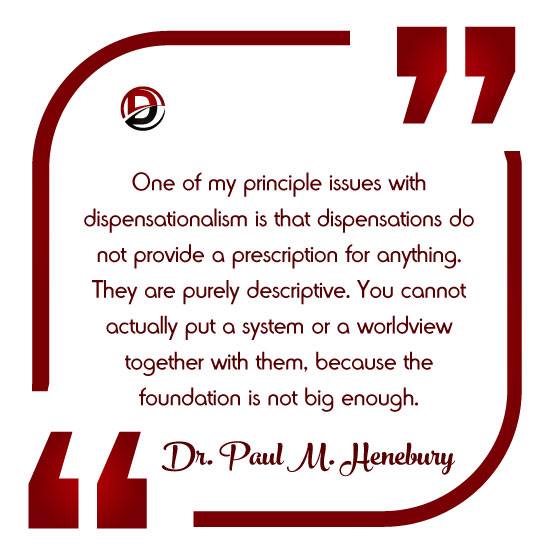 It is for reasons such as this that Henebury believes that dispensationalism has yet to become a fully developed system in its own right.

“Dispensationalism should not deal with only ecclesiology and eschatology,” he said. “It should deal with all of God’s truth. That would be a big step forward. Because it is the truth of the Bible, it should speak to all areas of the Bible, and you should be able to use it in all areas of life. You should be able to move in all directions from it. Dispensationalists have not been critical enough of their own foundation.”

In order to promulgate his views, Henebury has founded Telos Theological Ministries and Telos Biblical Institute.

“Telos is a resource center for anyone who is interested,” he said. “We are trying to offer solid Biblical and theological education at a low cost. In the institute, we have a lot of courses, and most of them are taught by me. We try to make them a thoroughgoing theological and worldview teaching. We exist for grounding people who really mean business with the Bible.”

From his perspective of theological education, Henebury stated: “We are really already in an online situation. I think that is going to continue. The physical campus is going to be less and less a feature of the theological landscape.”

And where is dispensational theology going within higher theological education?

“I really think there is not much movement at all, because dispensationalism does not move—because it is not prescriptive,” said Henebury. “It tends to be on the defensive a lot. That is not healthy. There always needs to be critical thinking, where people are trying to get closer to the truth, to bolster their arguments.”

And how should we go about promoting dispensational theology?

“Be less populist,” said Henebury. “We can write books for the popular reader, but we should not be concerned about wooing the popular reader—pulling them in, trying to grab them. I am also very much against pragmatism.” 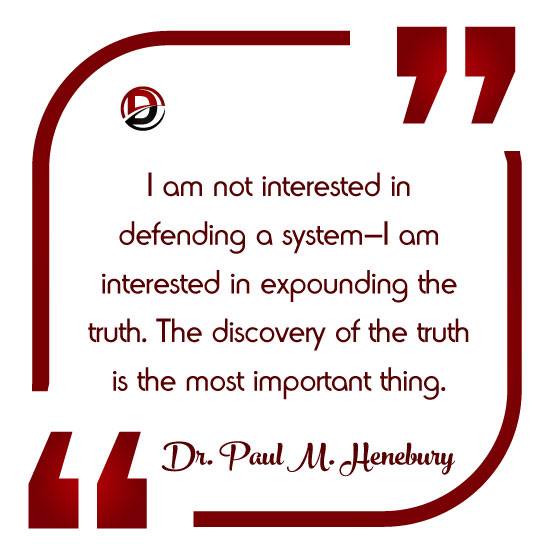 “Be more holistic,” he added. “Dispensationalists have got to wake up and see that treating their theology as an add-on to another system of theology—a sort of parasite—is not good enough. I am not interested in defending a system—I am interested in expounding the truth. The discovery of the truth is the most important thing.”

“We have got to be prescriptive. A theology that is the truth, has to prescribe and say things,” stated Henebury.

“Every single major doctrine of Scripture is based on plain-sense hermeneutics.”