A Dispensational Discourse with Cory Marsh

A Dispensational Discourse with Cory Marsh

Editor’s Note: Providentially, through the process of contributing to the new book called Forged from Reformation, I have become familiar with Cory Marsh, who also contributed to the book and served as its copy editor. My interactions with him led to this interview, for which I am most grateful. Marsh is a young professor, but his thoughts on the subject of dispensationalism are many—and they are profound. I believe that you will enjoy learning about and from him in this month’s interview. And, once again, as we celebrate the release of Forged from Reformation, We pray that God may be pleased to use this new work for His glory.

A posterity shall serve Him.
It will be recounted of the Lord to the next generation,
They will come and declare His righteousness to a people who will be born,
That He has done this. (Ps. 22:30-31)

“I think my story is not unique,” stated Cory Marsh. “We share this same story where we were dispensationalists before we even knew it. I was in my mid-20 before I heard the term.”

Marsh continued: “Hearing about Israel from my mom—she loves Israel. I grew up thinking, ‘Why would there be anti-Semitism in the church? Our Messiah was Jewish—He still is. The first family was Jewish.’” 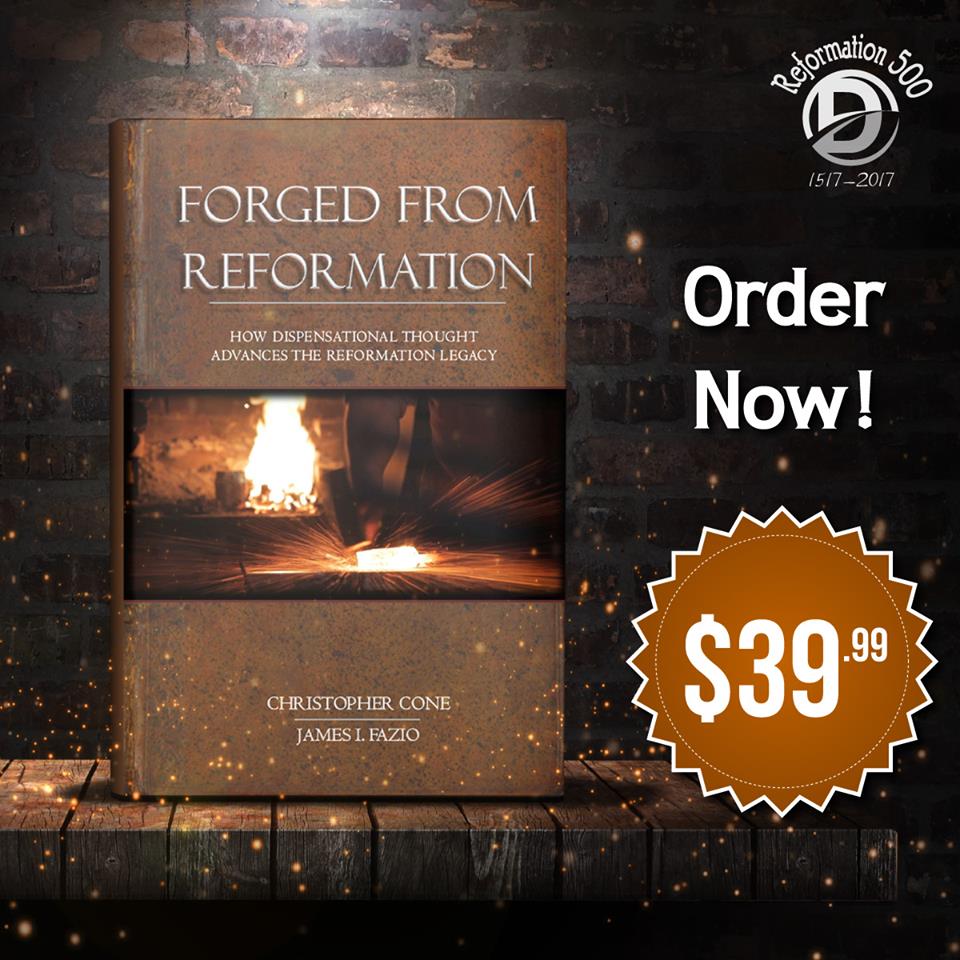 Marsh realizes now how all of this fits together on a much more profound level. “That is one of the strengths of dispensationalism. It is based on an interpretation that is literal. If you interpret things literally then you are going to come to these points that dispensationalists emphasize without any problem. It is just a normal way of reading the Bible. Dispensationalism, at its core, is really a hermeneutical movement.”

Marsh became serious about Bible study as an adult, and said that soon he could think about little else.

“I was sold on the idea that I had to go to seminary,” he stated. “I could not get the Bible and theology out of my head. I was just thinking all day long of Scripture and hermeneutics. I would wake up in the middle of the night and have to track down a source or a verse.” 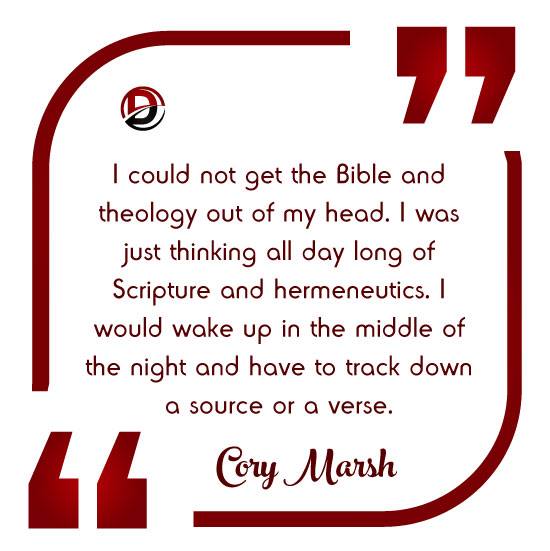 “Southern California Seminary has always been here,” he said. “We have been here for 70 years, and we have been consistent,” he said. “We emphasize expository preaching here and dispensationalism. We understand the Scriptures literally, and we are not going to shy away from that.”

Marsh’s first ministry assignment was serving in a church plant, but when he had the opportunity to move into a ministry at his alma mater, he found himself drawn to that opportunity as well.

“My heart has always been for the local church, but I started having a love for scholarship.”

Marsh describes himself as being “passionate about rekindling the pastor–scholar role within Christian education and ministry.” 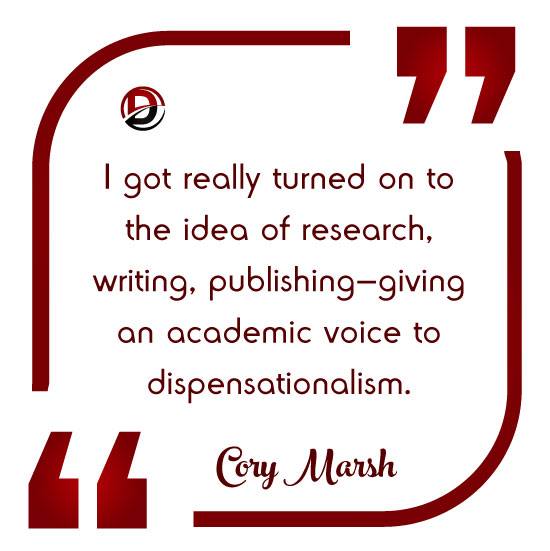 “I got really turned on to the idea of research, writing, publishing—giving an academic voice to dispensationalism. I am just overjoyed because I get to talk about this stuff all day long.”

For Marsh, the mixing of church and academy is not only part of his personal story, but also a professional passion.

“That transition from pastoral ministry into academics—I am convicted that we need to bring back the pastor-scholar role,” he said. “When we think of the Reformation, and even the Puritans afterward—the pastor was the smartest guy in the village. It is not because he was better than everyone else. He did his studies. We need to have professors in the classroom with a shepherd’s heart, training future scholars.”

Marsh added: “Pastors should not be only caring for the sheep with a pastoral heart, but also stimulating their thinking and training them intellectually. Theological concepts all have a place behind the pulpit as well. Pastors should exemplify that to their people in the church. It should not just be devotional or academic, it should be both. That has been my all-consuming passion, to bridge those two, and to train future men and women of God who understand that passion, and show that the two go together.” 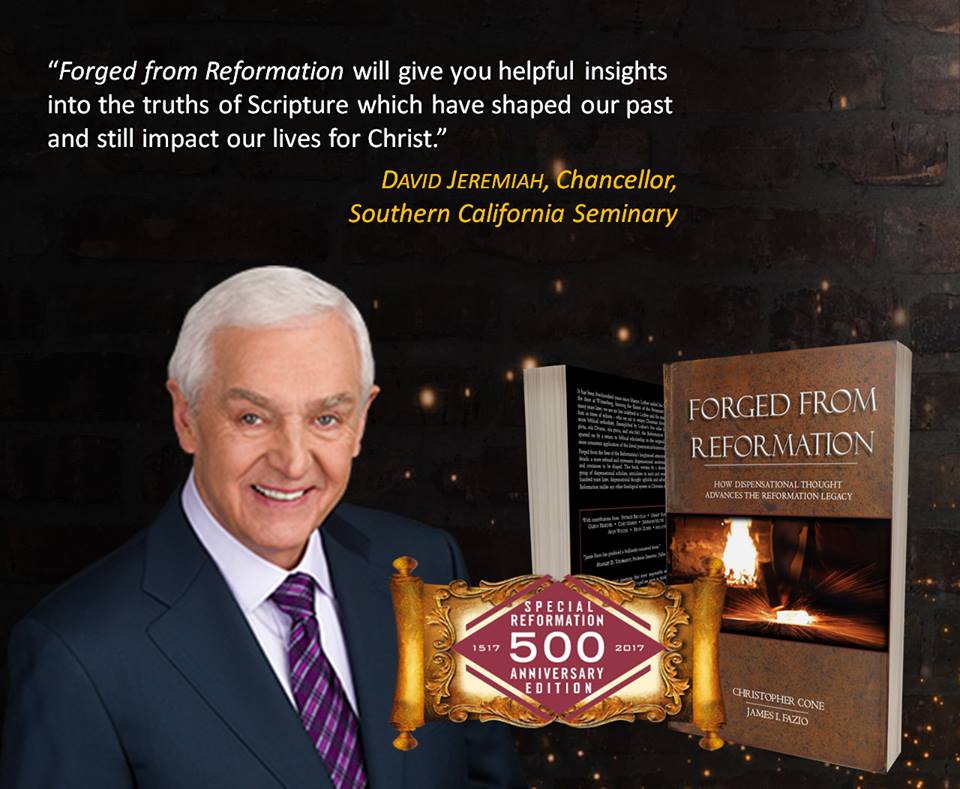 Now in his first year of teaching full-time at Southern California Seminary, Marsh is excited to interact with students from many different backgrounds.

“We get to teach dispensational thought to students who have never been exposed to it,” he said.

Marsh is a copy editor for the book Forged from Reformation and contributed two chapters to its historical section. They are entitled “Luther Meets Darby: The Reformation Legacy of Ecclesiastical Independence” and “How Dispensational Thought Corrects Luther’s View of Israel” (co-authored with Dr. Brian Moulton). The book is published by Southern California Seminary Press, but it is being promoted and sold by Dispensational Publishing House, and includes chapters by several DPH authors.

“One of my first roles here has been the book,” said Marsh. “This book was a great way for us to get our name out there as SCS Press. We are serious about academics and scholarship.” 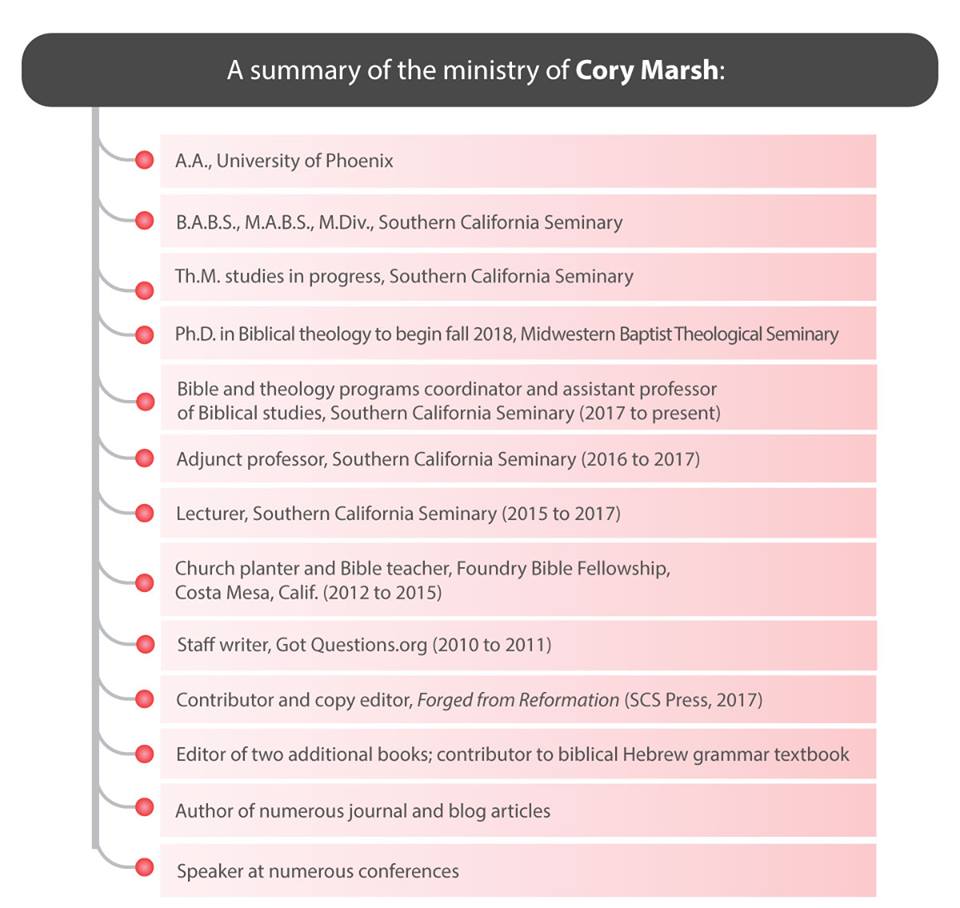 Like the book’s co-general editor, Dr. James I. Fazio, Marsh has high expectations for the impact of this volume. “

“This book is something you have to interact with,” he said. “You can’t dismiss it. It is very exciting.” 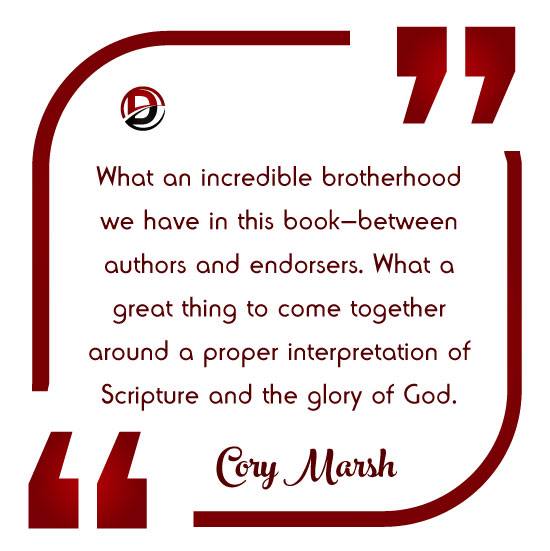 Marsh elaborated: “What an incredible brotherhood we have in this book—between authors and endorsers. What a great thing to come together around a proper interpretation of Scripture and the glory of God. We have established a great network of friends and brothers and scholars—to the absolute necessity of the gospel.”

“We want to have this reviewed and critiqued—not just by our camp—but by the Reformed as well. We want to give Covenantalists a chance to read this and respond. We believe we were even-handed without slipping into ad hominin attacks or anything like that.”

Marsh said that his goal is to “be a voice within conferences and publishing for an academic presentation of dispensational thought for people that might not get exposed to it. We need to get academic, scholarly dispensational work out there.”

In that spirit, SCS Press sent review copies of the book to several prominent Reformed theologians.

“We want this book to be out there on both sides,” Marsh stated. “We are not just trying to keep it to our little club—people we agree with, or that agree with us. We want it to get out to people with opposing views, and give them a chance to interact with it. It is a phenomenal book. It is really exciting. It has tentacles that are going to reach out to other communities.”

Marsh has deep thoughts about the historical tie between the Reformation and dispensationalism.

“When you become a Christian, and you start hearing these terms, like Protestant, Roman Catholic, Eastern Orthodox, you have to know where you fit in,” he said. “There was this interest for me to understand the progression that led to modern-day evangelicalism. And you have to interact with the Reformation.” 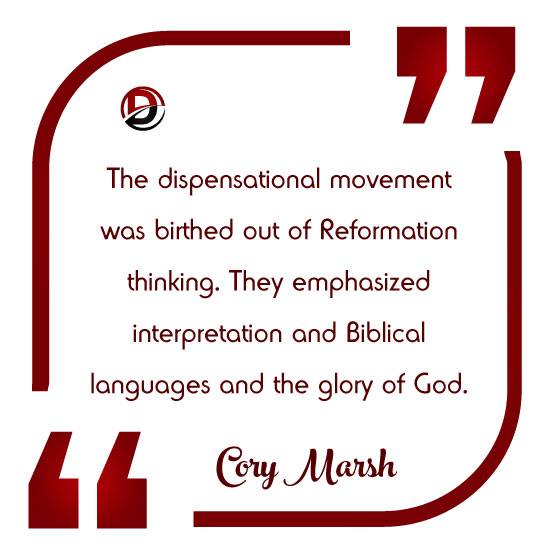 “Dispensationalism is not opposed to Reformed thinking,” he added. “I am not saying covenantal. If dispensationalists are known for anything, it is making distinctions. Yet sometimes we use that term Reformed too broadly. The dispensational movement was birthed out of Reformation thinking. They emphasized interpretation and Biblical languages and the glory of God.”

Marsh explained: “We make the case in the book that we are the truest, most consistent heirs of the Reformation and the Reformed legacy. I think we do a disservice when we polarize that Reformed is on one side and dispensationalism is on the other. That is not true. It is true that covenantal theology is on the other side from dispensationalism. But we are Reformed—in the broad sense that we were birthed out of the Reformation. I am not saying anything to stir the pot in any sense. I am trying to bring some clarity to the discussion.”

Again, Marsh clarified: “What we are not is covenant theologians. That is a subset of the Reformed legacy—just like dispensationalism is.”

Marsh believes that dispensationalists are actually uniquely poised to deal with the history of the Reformation in a meaningful way—especially when it comes to dealing the anti-Semitic statements made by Martin Luther.

Marsh stated: “Dispensationalism emphasizes the failure of man in each dispensation. We break covenants. We break vows. Thank God for His grace. Martin Luther failed as horribly as he did—and the chapter goes into is. It does not shy away from it.”

Marsh attributes Luther’s anti-Semitism to his allegorical interpretation of certain passages—not to his disappointment over failed attempts to evangelize the Jews. He notes that Luther, having written The Bondage of the Will, understood the reality of people rejecting the gospel.

“We are the ones who have consistently promoted that there are prophecies given to national Israel that still have to be fulfilled,” said Marsh. 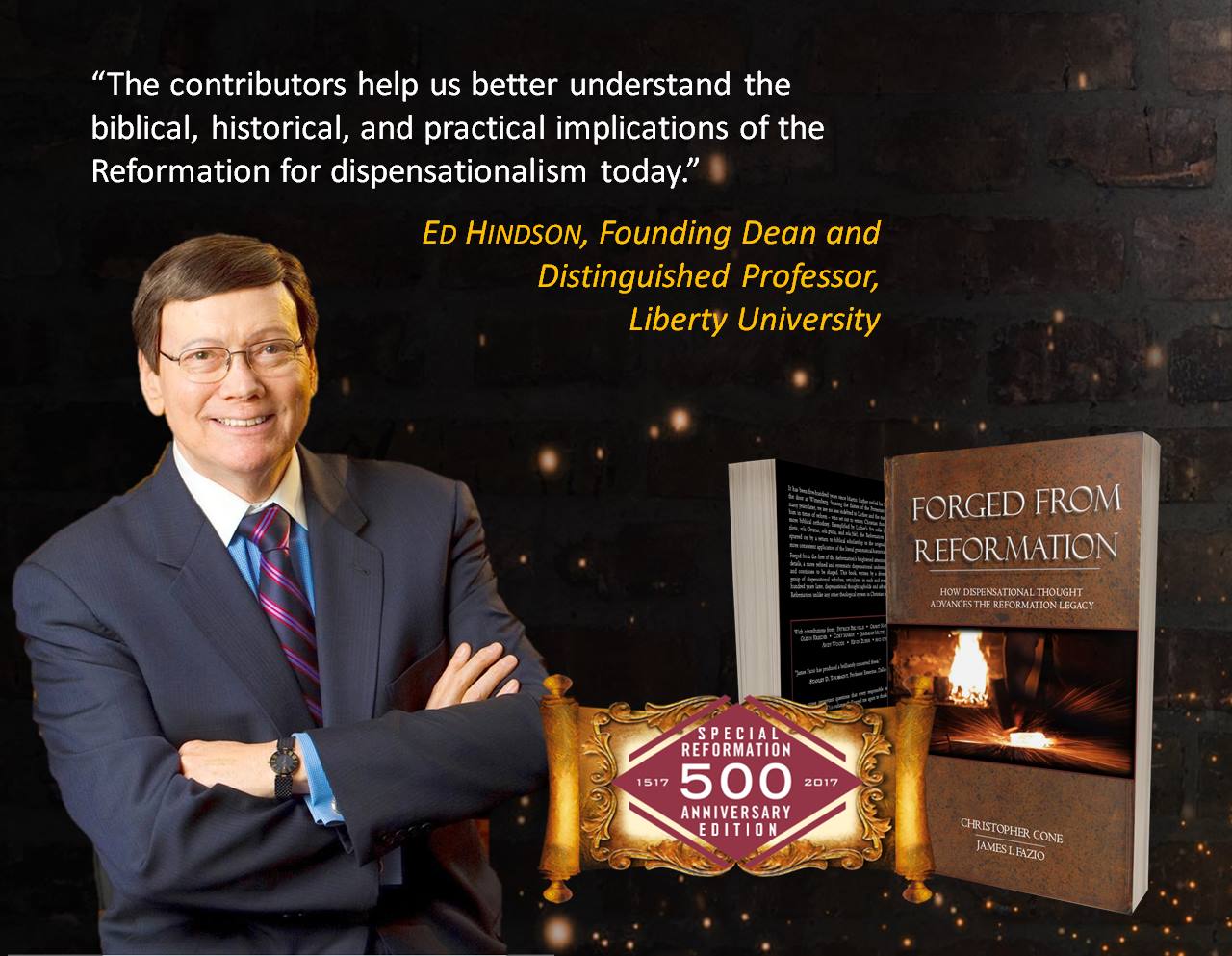 So what trends does the young professor see in seminary education these days?

“Unfortunately, it is the dismissal of original languages,” said Marsh. “It has been watered down to the point that it is not even required. It used to be the reason you went to seminary. A lot of seminaries have capitulated to that pressure for enrollment.”

He also said he is watching “the proliferation of degrees and specialties. You make it more relevant for people—it is so contemporary. We have lost the unifying principle of theological education.”

And one final trend that Marsh does not appreciate is “this polarizing of camps that we do. This polarizing can even occur within dispensationalism.”

“Before you know it, we are all divided in our little clubs, as opposed to interacting and having discussions,” he said. 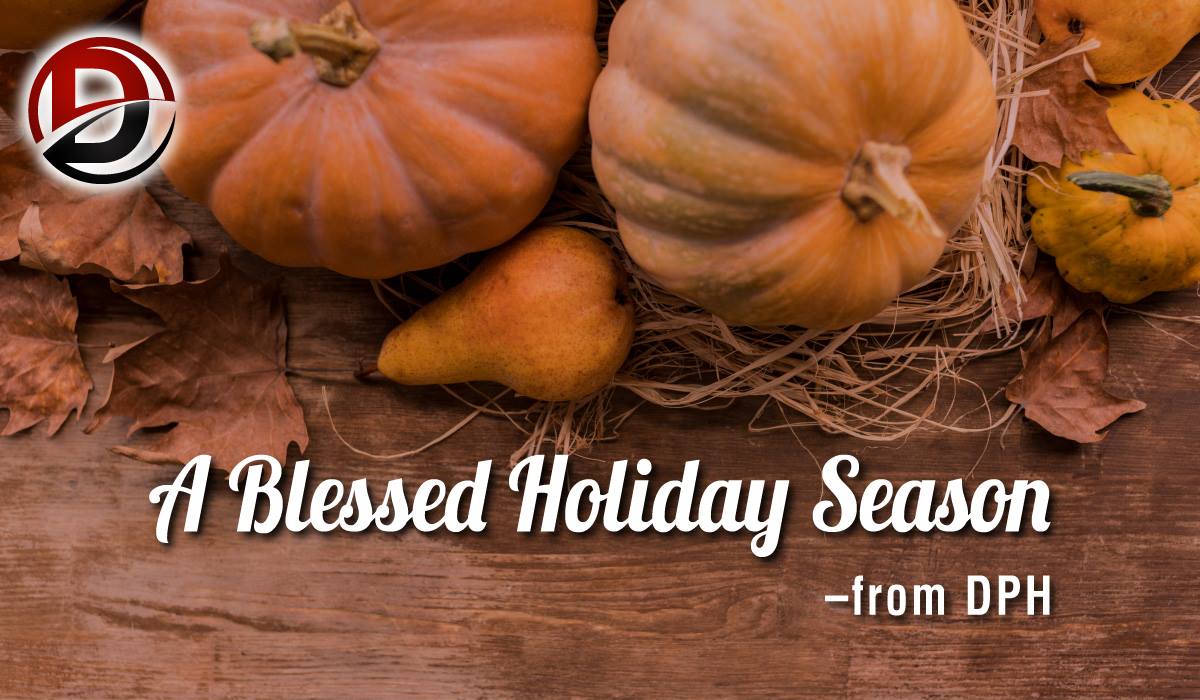